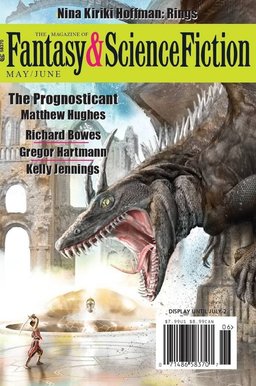 The May/June F&SF features the second appearance of Matthew Hughes’s new series character Baldemar, in the issue’s cover story “The Prognosticant.” Matt had an interview with Stephen Mazur on the Fantasy & Science Fiction blog in which he discusses the series.

It’s a continuation of the career of young Baldemar, who was introduced in the last issue in “Ten Half-Pennies” as a budding wizard’s henchman working for a thaumaturge who calls himself Thelerion the Incomparable (though his fellow wizards would likely change that to “Incompetent”).

In “The Prognosticant,” Baldemar and his supervisor, Oldo, are sent out to a ruined ancient city in the desert to bring back a magical object known as the Helm of Sagacity. But the Helm, it turns out, is not just an object: it’s an entity, and a powerful one. And it has its own agenda…

I’m writing the life of a character in a Jack Vance-inspired, Dying Earth fantasy world. Like most of my characters, Baldemar is an outlier, as becomes evident as he deals with what the world hands him. He’s not your average henchman.

Victoria Silverwolf has a fine review of the issue at Tangent Online, with particular praise for the stories by Brian Trent, Kelly Jennings, Zach Shepard, and R. S. Benedict. Here’s a snippet.

Brian Trent leads off with “A Thousand Deaths Through Flesh and Stone,” a grim tale of revenge or justice, depending on one’s point of view. Humanity has inhabited many places in the solar system. The plot begins after a final act of violence at the end of a particularly horrific war has killed nearly the entire population of Mars. The narrator is sent to assassinate a war criminal hiding on the Moon. The mission is made particularly complicated by the fact that both the hunter and the prey have had their minds uploaded into multiple bodies. What follows is a fast-paced thriller with a level of violence which some readers may find disturbing…

“The Prognosticant” by Matthew Hughes deals with the adventures of a wizard’s henchman. In the first part, he catches an apprentice thief who is investigating the wizard’s security system, and learns some tricks of the trade. In the second part, he is sent by his master to obtain a magical helm, and faces great danger in doing so. Although not strictly a comedy, the tone is tongue-in-cheek, and the story is episodic and open-ended…

“The History of the Invasion Told in Five Dogs” by Kelly Jennings is a brief tale with a title which reveals its structure. The narrator describes five dogs he has encountered, from childhood, just before the Earth is invaded by aliens, to early adulthood, when small groups of humans struggle to survive. The emotional appeal of the story is made stronger by the fact that the narrator offers only small glimpses of the invaders.

This issue is on sale until July 2. We last covered F&SF with the March/April issue.

Our Late May Fantasy Magazine Rack is here, and all of our recent magazine coverage here.