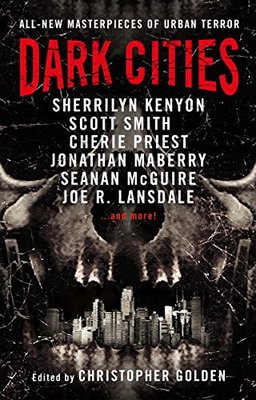 The prolific Christopher Golden (who’s produced, by my count, over a hundred novels in the last 20 years) has edited several noteworthy anthologies recently, including zombie anthologies The New Dead (2010) and 21st Century Dead (2012), The Monster’s Corner (2011), and vampire collection Seize the Night (2015). He turns his attention to urban horror in Dark Cities, coming in hardcover next week from Titan.

For you puritans who don’t like to mix your horror genres, the Titan website notes “The book won’t include zombies, vampires, or anything apocalyptic.” But it does contain original non-apocalyptic, non-zombie-vampire fiction by Scott Smith, Tim Lebbon, Helen Marshall, M.R. Carey, Cherie Priest, Jonathan Maberry, Paul Tremblay, Nathan Ballingrud, Ramsey Campbell, Seanan McGuire, and many others.

Twenty of today’s most talented writers bend their skills toward the darkness, creating brand-new tales guaranteed to keep you awake at night — especially if you live in the dark cities.

Far worse than mythical creatures such as vampires and werewolves, these are horrors that lurk in the places you go every day — where you would never expect to find them. But they are there, and now that you know, you’ll never again walk the streets alone.

THE DOGS by Scott Smith
IN STONE by Tim Lebbon
THE WAY SHE IS WITH STRANGERS by Helen Marshall
WE’LL ALWAYS HAVE PARIS by M.R. Carey
GOOD NIGHT, PRISON KINGS by Cherie Priest
DEAR DIARY by Scott Sigler
WHAT I’VE ALWAYS DONE by Amber Benson
GRIT by Jonathan Maberry
DARK HILL RUN by Kasey Lansdale & Joe R. Lansdale
HAPPY FOREVER by Simon R. Green
THE SOCIETY OF THE MONSTERHOOD by Paul Tremblay
THE MAW by Nathan Ballingrud
FIELD TRIP by Tananarive Due
THE REVELERS by Christopher Golden
THE STILLNESS by Ramsey Campbell
SANCTUARY by Kealan Patrick Burke
MATTER OF LIFE AND DEATH by Sherrilyn Kenyon
GRAFFITI OF THE LOST AND DYING PLACES by Seanan McGuire
THE CRACK by Nick Cutter

Our previous coverage of the prolific Mr. Golden includes:

See all our recent coverage of the best is upcoming fantasy here.