It’s roundup time again, folks. This past March we were treated to two stories from Curtis Ellett’s Swords and Sorcery Magazine and a trio from Adrian Collins’ Grimdark Magazine. Some I liked, some not so much. Without further jib jab, I’ll start the reviews.

Swords and Sorcery #62 opens with “The Sword Over the River Thar” by Bryan Dyke. It’s a thoughtful and introspective tale of a reluctant soldier looking back over his childhood and his own wartime experiences. There are many fine moments in the story, some quite moving. Unfortunately, the story suffers from moments of weak prose, including an overreliance on the word portal. References to such disparate elements as hoplites, barons, elves, and the distinctly Anglo-Saxon-sounding placename Norwich, make the setting feel ramshackle. I hope to be of service by pointing these things out. This is Dyke’s first published story and there is far more than the germ of a good story on display here. I hope to read more by him in future.

In the past, most recently in December’s roundup, I have been harsh towards the stories of Jeffrey Scott Sims. I have found them to be in possession of solid plots wrapped in clunky, faux-archaic prose. So I was surprised when I found myself quite enjoying his new story, “A Sojurn in Crost.” Bereft of supplies, stranded in enemy territory, “Lord Morca, wizard and warrior of ancient Dyrezan” and his battle-tiger, Treenya, are making their way to the coast and safety when they come across the town of Crost. There’s little mystery to what’s going on in this quite familiar story, but Sims spins his yarn with enough conviction to overcome any staleness. Sims’ style remains similar to that of his previous tales of Dyrezan but is deployed with more control and concision. 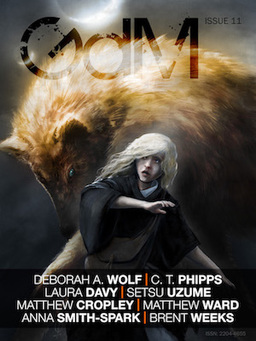 Grimdark #11 (forgive me, but somehow I seem to have missed Issue #10) kicks off with “Devouring the Dead” by Laura Davy. A tale of (more or less) traditional zombies and epic revenge, it’s easily my favorite story this time out. A young girl, lone survivor of an invading army’s attack on her village, has been pressed into the service of the Soulless, creator and keeper of the army’s zombie contingent. The human automata are, disturbingly, called Dear Ones.

The Soulless creates the creatures from the enemy dead by means of a terrible ritual that involves eating parts of them and weaving some of their hair into his own.

He pulled out a curved knife and with quick cuts removed a strip of forearm skin from the body. I felt the sting of bile rise up in my throat as he brought the bloody flesh to his mouth, tipped his head back, and swallowed it.

Where the story goes and how it gets there isn’t surprising, but its telling is gripping and well-deserving of the descriptor grimdark. “Devouring the Dead” is haunting stuff.

“The First Kill” by C. T. Phipps is a sci-fi tale of cyborg killers stalking a target in Paris. I’m not sure what makes it grimdark. High-tech trappings aside, its depiction of a secret assassin organization treating its agents as property is at least as old as Robert Ludlum’s 1970s thrillers. Also, the organization’s logic seems flawed as to the superiority of kidnapped, brain-wiped killers.

In Setsu Uzume’s “For Honour, For Waste” a goddess, or at least something like one, comes every forty-eight years to the city of Malajine to claim a price for her continued protection.

Malajine would have been a jewel of a city, were it not the colour of bone.

The white houses were carved from the breast of the coastal cliffs, layered and tiered like the ridges of sand left by an ebbing tide. The sunlight glittered in the water, and glowed on the rooftops. For the people of Malajine, every sculpted roof, every coloured glass dish—every morsel of food—was a source of pride and lingering fear. Fear that Manaph the Divine would claim your art, or your talent to make it, or your very life, as payment for her blessings.

Three aged military commanders, Rohnaq, Nouli, and Kejra, find their world overturned when they are chosen by Manaph for an unheard-of triple sacrifice. Not content to face oblivion without a fight, they come up with a plan. It’s not a sure one, but they decide it’s better than nothing.

Uzume’s tale contains some interesting worldbuilding. Unlike several other stories this month, I never felt like I knew where “For Honour” would go next, something I’m always excited to encounter.

Deborah A. Wolf’s “Cry Wolf” is a tale-within-a-tale. Thessa, when pressed for a story by a group of children, reaches back into her long-ago youth. Thessa was the daughter of a woman burned as a witch, and lived as a veritable outcast, surviving on the pittance thrown her way for watching the town’s sheep. Her already hard life becomes harder when she starts having visions.

Howling rose from the woods about her, from the hills above her, from the Huntress moons themselves. A silver song, a dirge, a song of blood and moonslight.

‘Wolf!’ whispered Thessa to the sheep, hoping to frighten them away. But the sheep lay still, still as death, and their blood soaked the newfallen snow to mush.

‘Wolf!’ she cried to the careless moons, dancing high overhead. Surely after all they had been through together, the Huntress would not allow her to die so, torn apart on a night dipped all in silver.

‘Wolf!’ she screamed when a big male appeared in the snow before her. He was a golden wolf, blue-eyed and glowing as if he had come from the moons. He looked at her, blinked his bright eyes, and…
grinned.

Thessa turned to flee as the golden wolf crouched low, ready to finish off his meal of mutton with a mouthful or three of girl-flesh. But her hair caught on a low branch and jerked her back, tearing her out of her thin cloak
and out of the night
and out of her dream of wolves.

Thessa’s lupine dreams continue, increasing in intensity. With each new vision, unable to distinguish it clearly from reality, she warns the town. With each seemingly false warning the townspeople threaten her more and more. Reaching its climax, the story folds in on itself, leading Thessa and the reader back to the present and the tale’s beginning.

The rest of Grimdark #11 is packed with interviews, reviews, and articles. Of most particular interest is “The Odd Hopefulness of Grimdark” by Matthew Cropley. I don’t agree with his general thesis, but his effort to provide a critical framework for the sub-genre is solid.

This past month saw the publication of two lengthy new collections of which I have not had the time for so much as a glance. The first is Cirsova #5 and the second is Skelos #2. I’m sad to say it, but sometimes reality has a terrible habit of impinging on my reading time. Considering how much I’ve been digging Cirsova, and that Skelos #2 has stories by Adrian Cole, W.H. Pugmire, Milton Davis, and Scott Oden, I’m more than a little bummed out.

So, until next month, there’s the roundup. Next week, I’ll be back with another look at sci-fi from my formative years.