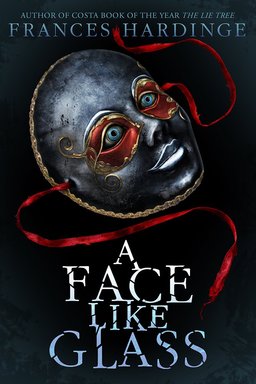 Just last week I was complaining about the dearth of good subterranean fiction… and along comes Frances Hardinge’s A Face Like Glass, set in an underground world that Kirkus calls an “utterly original setting… [with] a cracking good story.”

Frances Hardinge is the author of Cuckoo Song, the 2015 winner of the British Fantasy Award, as well as Fly By Night, Verdigris Deep, and Twilight Robbery. She has twice been nominated for the Andre Norton Award for Young Adult Science Fiction and Fantasy, for Cuckoo Song and The Lie Tree. A Face Like Glass was published in the UK in 2012; the US version arrives from Amulet Books in early May.

In the underground city of Caverna, the world’s most skilled craftsmen toil in the darkness to create delicacies beyond compare — wines that remove memories, cheeses that make you hallucinate, and perfumes that convince you to trust the wearer, even as they slit your throat. On the surface, the people of Caverna seem ordinary, except for one thing: their faces are as blank as untouched snow. Expressions must be learned, and only the famous Facesmiths can teach a person to express (or fake) joy, despair, or fear — at a steep price.

Into this dark and distrustful world comes Neverfell, a girl with no memory of her past and a face so terrifying to those around her that she must wear a mask at all times. Neverfell’s expressions are as varied and dynamic as those of the most skilled Facesmiths, except hers are entirely genuine. And that makes her very dangerous indeed…

Hardinge’s a writer I’ve been meaning to catch up on. I read Fly by Night when it first came out, and it was a total delight. The only reason it was marketed as young YA was the age of its protagonist — there were many layers of craftsmanship that only an older reader, or one who’d absorbed a whole lot of history, could have perceived. It was a screwball comedy about the very highest stakes, with characters sort of reminiscent of Dickens only several dimensions more complex.

This sounds like a fine stand-alone to start with again.

Thanks for the delightful mini-review!

Hardinge is someone who’s flown below my radar until now. I will correct that!