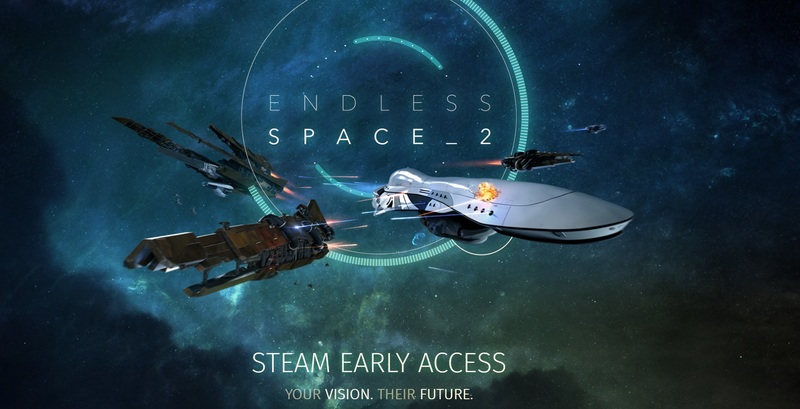 Aight. 14 hours in, 4 campaigns played/started, it’s the wee hours of the morning, going on afternoon. I think I’ll take a stab at writing a few words on the Early Access release of Endless Space 2.

First up, Bad Things! I Wish These Weren’t in the Game, But They Are

This is a bug. Every campaign that’s made it to turn 67-ish so far (Craver, Sophon, Voydani) suffers a fatal error. Suggested options include A) loading an autosave from a couple turns ago, and B) ignoring it. Autosaves did nothing. Same turn rolls around, yellow/red screen of death on my monitor. Ignoring it, amusingly enough, was more effective. I made it to turn 69 (thanks, game) before Terrible Things happened to my computer. I strongly suspect this bug exists due to issues in how the game covers faction deaths, because as the Cravers I had murdered the last Voydani Ark and was cleaning up stragglers.

The error comes up every time I try to fight one of their ships. As the Voydani, I was cleaning house with all the minor factions up in my grill. Seems that they were all upset that I was a “Vampiric Bastard” who kept “Abducting and Harvesting” their citizens. Ignorant fools, I was uplifting them to a higher plane of existence!

I got no clue what was up with the Sophons, though. I was in my corner of space, minding my own business (bullshit!) when all of a sudden, my ascension up the tech tree was interrupted by the error. Maybe the Cravers ate somebody they shouldn’t have *cough*Voydani*cough*. 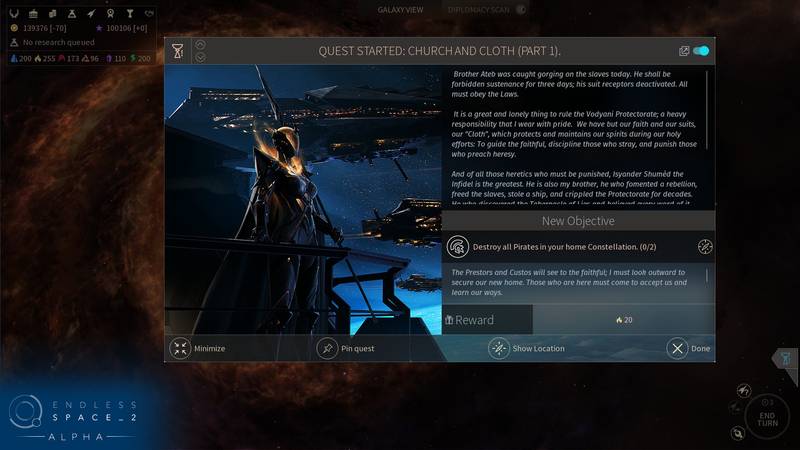 Also a bug, this one in two flavors. Flavor 1 is weird. Game moves me to desktop while it loads. Jarring at first, I grew used to it and rather enjoyed being able to flip my music selection from “Ambient Empire Ruling Sounds” to “Space Combat, Scene 1.” It’s also a rather unique way to market a game as having no loading screens (except the menu). Type 2 is annoying and I wish it dead. This loads the scenario fine and dandy, but the actual display is still stuck on the “Fleet Battle at XYZ” pop-up. No problems leaving the battle video, only when entering. 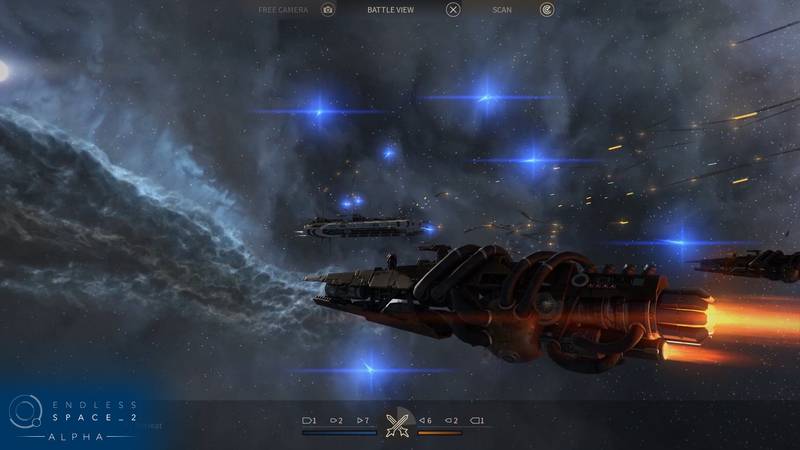 Things I Wish Were in the Game

Ha ha ha. A common complaint about the game (hardly surprising. The first game had them, and there’s an entire class of ship named “Giant-Ass Supercarrier”), and one to which I have an actual response for: It’s on the Dev’s list for their “Glorious 5 Year Update Plan, plus release,” filed way down under “Release?” We’ll get them, just in a long-ass time. Play the waiting game. 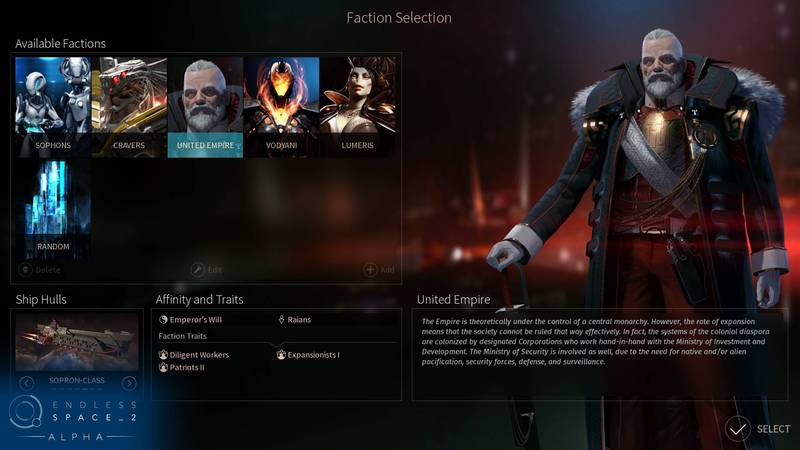 I’ve got a couple dozen hours under my belt for Endless Space/Legend. Not nearly as much as some of you out there, but enough that I don’t need my hand held for something Amplitude puts out (which is great, because the current tutorial is “Swim or Die, and here’s the water temperature”). Right now, those two screens put out too much and too little information. As the Cravers (solution to lack of trade information: Don’t play Cravers, unless you trade bullets), I had a population comprised of 4-armed warrior monk Koala Bears, a gene-modified plague of locusts o’er the land, and hyper industrial-militants, with a (benevolent!) dictatorship guiding them all.

So why in Jake Hunter’s name did the pacifists take over? Do the locusts not want to eat anybody? (Take that, Sophonts from problem #1!) For reals, it took them one turn to completely sweep the election with like 90% of the votes. 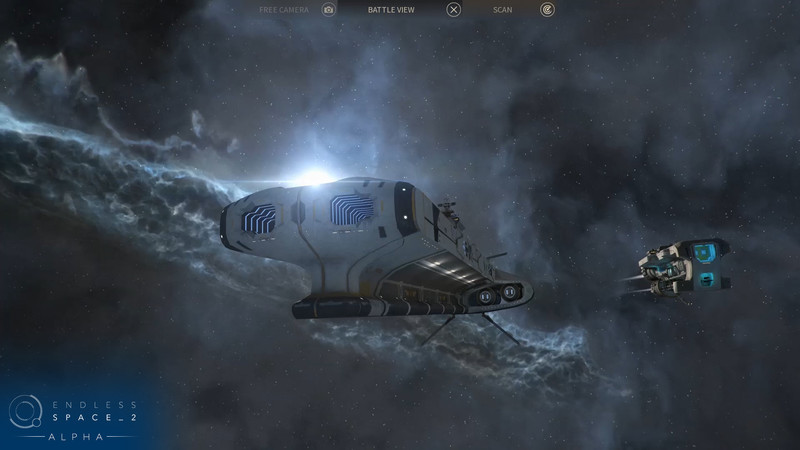 Things That Are in the Game That I Enjoy

Holy God, this game is beautiful. Ships look amazing (And they UNFURL in combat! SQUEEE!), and they collect battle scars like whoa. I’ve had the honor of watching one of my capital ships go into battle, get shot to pieces (1 hp left!) and walk into the next one with the same plasma scar punched right on top of the bridge. Granted, said scars likely exist because the ship didn’t get healed, but the fact remains that weapons fire leaves unique scars on a ship. Not sure if large enough wounds become permanent. Aside from that, the planets and general space environment look stellar (get it?) as well. I also found out that Amplitude brought on a movie director to help them with camera work (Check the Rock Paper Shotgun updates under Endless Space. It’s the article about their acquisition by SEGA), though I forget their name.

#5 side note: Watching rockets fly is awesome. Put 4+ launchers on a ship, and their final attack run is like a claw reaching out. There’s a Lumeris/Voydani battle video that shows this on YouTube. 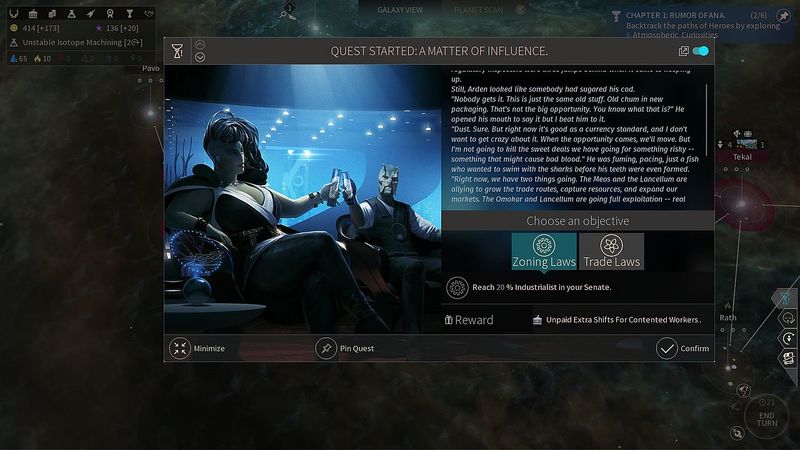 Amplitude has quite the track record for producing high quality BGMs for their games, and Endless Legend knocked it right out of the park. In my opinion, the Voydani’s choir parts are some of the best in Endless Space 2. The rest of it’s decent. 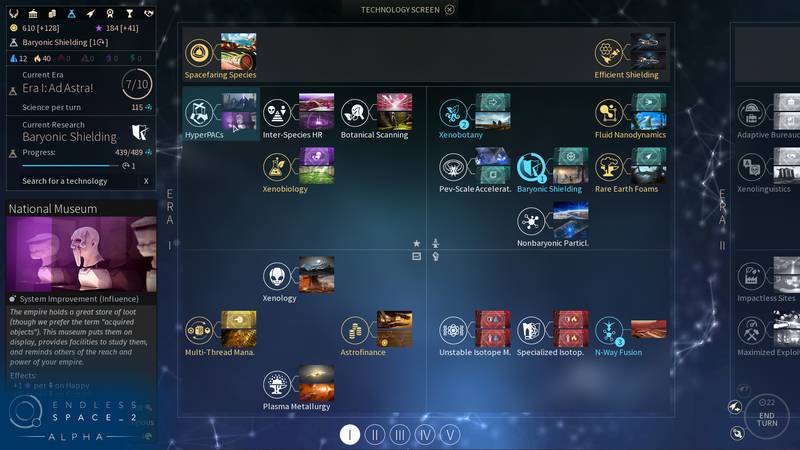 Very different from Endless Space 1, this looks like a modified version of Endless Legend. Research topics are split into 5 blocks: Untitled (mostly inhabited by ship hulls), Planet and Ship Military, Dust and Manufacturing, Influence and Food, and Science and Colonization. Each research topic gives a couple different effects (the colonization topics all unlock two planets each, for instance), and the entire tree is split into 5 “Eras” (Era 5 is empty). These Eras are locked/unlocked the same way as Endless Legend, with a special note: Sophons (and anybody who gets a Scientist majority political party) research at one Era higher than normal.

Technically present, the AI’s as dumb as a bag of rocks (this will be fixed as Devs add more things), which is great, cause I usually have my hands full killing pirates and quest baddies, looting ancient ruins and exploring the depths of space. Also I mostly play Cravers (Can you tell?) and they really only do gunboat diplomacy, unless you (are forced to) play Pacifist. You think I jest, but see end comment #4.

Overall, this is a really, really good (with some flaws) demo of Endless Space 2. I would strongly recommend the full game to people, especially for the 30USD they’re asking for. We’ll see if I can edit this as more updates roll in.

This review is based on the Steam Early Access version of Endless Space 2 available earlier this year (January 2017).