There is something magic about a house, or there should be. There are hints of this in James Stoddard’s The High House, in which the house is a universe unto itself, or in the Professor’s home in The Lion, the Witch, and the Wardrobe, in which the house is a gateway to universes. We realize in some way that every house holds secrets, that every house is in some sense a castle, and that the portals of every house open either into a wider world without or an inner world within.

This ineffable something about houses motivates Diana Wynne Jones’s Howl’s Moving Castle, which despite the title isn’t really about a castle but rather a house and the family that gets collected inside it. My kids and I are big fans of Studio Ghibli, so the 2004 animated film adaptation by Hayao Miyazaki was our first exposure to the work. Before seeing the film, I had not heard of the late British fantasy author Diana Wynne Jones. Howl’s Moving Castle remains the only work by her I’ve read, though she wrote at least two other novels in which these characters also appear.

In the movie version, which was nominated for an Academy Award for best animated movie, the young heroine Sophie runs afoul of the Witch of the Wastes and is cursed with early old age. She wanders out of the town in which she lives and stumbles across the clambering, shambling mechanical castle of the wizard Howl, where she ingratiates herself as his housekeeper, all the while working to find a way to break the spell on her and teach the churlish Howl something of maturity. One of the film’s weaknesses is that in the midst of the wonder of the house itself and what Sophie finds within it, mysteries are thrown at the viewer without time to explore and then tied up hastily at the movie’s conclusion. They seem to hint at additional materials that weren’t quite worked into the film’s gorgeous, atmospheric treatment.

The book, originally published in 1986, is a good place to pick up these missing pieces. It’s a children’s book — or what might have been called a YA book if that had been a classification in the years before Harry Potter and Twilight. Though quite weighty, at over 300 pages in the edition I read, its simple, straightforward prose doesn’t carry the atmospheric depth of the film in quite the same way. Like the movie though, Howl’s house is central to the plot. The mobile portion (not imagined in the same way as the mechanical imagery in the film) is one entrance to a house the doorway of which opens on multiple locations.

The house’s magic is maintained by the fire demon Calcifer, whose mysterious bargain with Howl — from which they both long to be released — is a central mystery that Sophie must untangle. (Calcifer’s dialogue in the book fits perfectly with Billy Crystal’s delivery in the movie.) Howl’s own fickle, immature character is also pivotal, and Sophie’s artificial age gives her the authority to temper this in a no-nonsense but exasperated manner.

Unlike the movie, however, it is not a looming war that provides the increasing narrative tension but rather the threat of the Witch of the Waste, who has laid a curse on Howl as well. Another major wrinkle in the book left (perhaps wisely) untreated by the movie is the jarring detail revealed about halfway through the book that Howl’s true name is Howell and that he actually comes from our own world, from Wales to be exact. In a scene that undercuts (or perhaps parodies) the high fantasy of the book itself, Sophie and Howl’s apprentice Michael accompany the wizard back to his home to witness a domestic spat with his sister and his interactions with his niece and nephew.

Central to this all though is the house. Howl’s house is a puzzle-box, existing in various places at once and tying them together, and it mirrors the puzzles that are strung throughout the work. As mentioned, these are puzzles the animated version only hinted at. Indeed, in its transformation of characters, its disguises, and its missing people who pop in and out of the house until the final, crowded resolution, Howl’s Moving Castle reminded me strongly of a Gene Wolfe novel, or at least a Wolfean approach for young readers. (It may be more than coincidence that one of Wolfe’s more recent novels, The Sorcerer’s House, treats similar themes.)

And the puzzles indeed abound. Before Sophie even finds her way to Howl’s house, she learns that her two sisters — one of whom is apprenticed to another sorcerer — have magically switched identities, and this has continued ramifications throughout the book. By the end of the novel we realize that casual words spoken at the book’s beginning have a greater effect than expected. In addition to Sophie’s curse and the bargain that binds Howl and his demon, a missing prince and a missing sorcerer become additional riddles a careful reader is encouraged to puzzle out along with Sophie. Whether these puzzles are skillfully woven and gracefully resolved is less clear. In particular, the book’s climactic confrontation with the Witch of the Wastes is weak enough to explain why Miyazaki chose instead to defang her and use her as a more interesting character in the animated version. 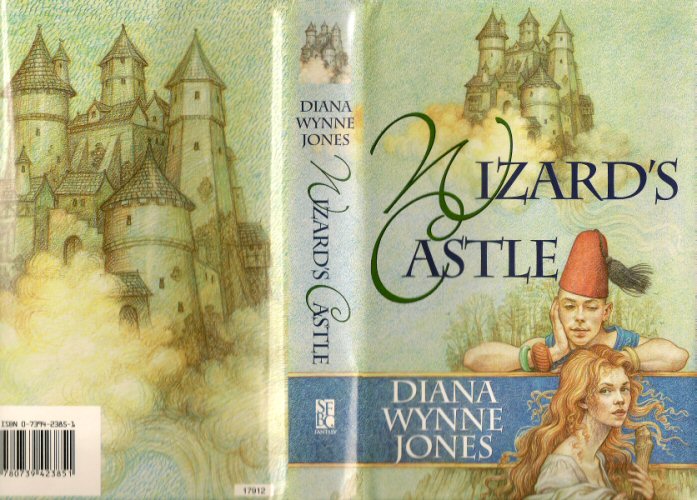 In all though, the wonder of the house and the casual familiarity that develops between Howl, Sophie, Michael, and Calcifer make this an enjoyable read for those who were charmed by the film and want to dig a bit deeper in the world Jones created and Miyazaki gorgeously interpreted. Though details are transformed between the two, the central aspects of magic ring true in both.

Stephen Case has published fiction at Beneath Ceaseless Skies, Orson Scott Card’s Intergalactic Medicine Show, and Daily Science Fiction. His reviews have appeared at Fiction Vortex and Strange Horizons, as well as his own blog, stephenreidcase.com. His last review for us was Something Terrifying and Wonderful: In Calabria, by Peter S. Beagle.

This was our family read-aloud book recently, and we all loved it. Next time we take a break from Harry Potter, we’ll start on Jones’s other two Moving Castle books.