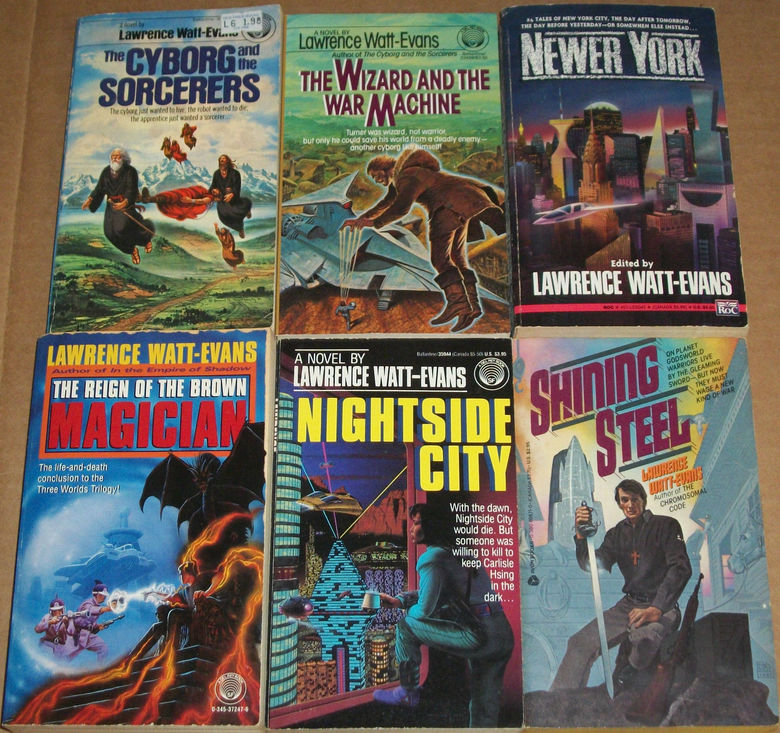 My introduction to Lawrence Watt-Evans was his brilliant short story “Why I Left Harry’s All-Night Hamburgers” which originally appeared in the July 1987 issue of Asimov’s Science Fiction, and which I read in his 1992 collection Crosstime Traffic. It won the Hugo Award for best story of the year. And while the overall tone of the tale is downbeat, even melancholic, it is hands-down one of the most optimistic and life-affirming short stories I’ve read in any genre. Check it out if you haven’t had the pleasure already — it appears in a bunch of different anthologies, including The New Hugo Winners, Volume II (1992), The Greatest Science Fiction Stories of the 20th Century (1998), and a 2013 Escape Pod podcast.

Lawrence’s most significant contribution to the genre, however, has been his novels — and he’s written a lot of them. His first, The Lure of the Basilisk, appeared in 1980; since then he’s produced five novels in The Lords of Dûs series (which Bob Byrne wrote about here), The Worlds of Shadow trilogy, The Obsidian Chronicles trilogy, thirteen novels set in the world of Ethshar (originally developed as a role-playing game setting), beginning with The Misenchanted Sword (1985), The Annals of the Chosen trilogy, The Fall of the Sorcerers series, and many others. Under his Nathan Archer pseudonym he’s produced a pair of Star Trek novels, Spider-Man: Goblin Moon (1999), two Predator novels, and much more.

I tend to like my SF and fantasy dark and gritty, and Lawrence’s work — especially his early novels — had a reputation for being light hearted and fun. So for much of his career I tended to ignore his work, which I’ve recently come to realize was a significant oversight. So when I found the lot of vintage Lawrence Watt-Evans novels above for sale on eBay for just $7.95 (shipping included), I found it irresistible. It arrived last week.

I think this set does a lot to demonstrate Lawrence’s true range. The books are as follows:

The Worlds of Shadow

The Reign of the Brown Magician (1996, cover by Nicholas Jainschigg) — Book III

The Cyborg and the Sorcerers had a cover by David B. Mattingly, and the The Wizard and the War Machine was covered by Del Rey’s most prolific cover artist, Darrell K. Sweet. But I admit I prefer the gritty, post-apocalyptic feel of the Grafton covers, by Geoff Taylor. 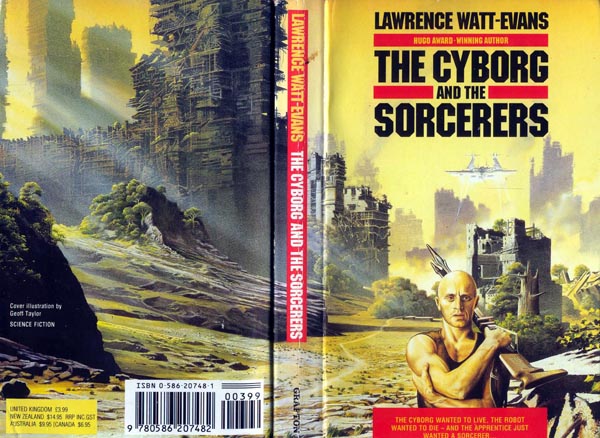 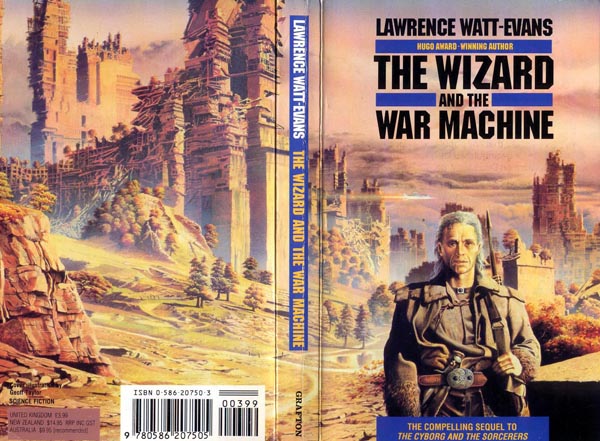 For all their popularity, the War Surplus books are the least interesting items in this lot for me. I’m far more intrigued by Shining Steel, which also has a science-fantasy twist to it. Here’s the back cover text.

Tribes are at War, Life is Hard, and All’s Right in Godsworld

In the beginning, they fled Earth to live by the Bible. Generations passed. Tribe begat tribe. It came to pass that each tribe claimed The Truth.

Like his enemies, righteous, mighty John Mercy-of-Christ lifted his shining swift sword against all heretic tribes. Until there come to Godsworld ancient, banished sins: machine guns and plastic; soft, bright-colored cushions; and women, wanton women – all heralding the advent of licentious Earthers, come to upset the just balance of war on Godsworld, offering false peace through the Satanic seduction of trade.

Now John will either succumb to the temptations of ease and greed or learn to battle the incoming corporations – on their own terms.

Shining Steel is a standalone novel, which explains some of the appeal.

But the book that I find most interesting in this lot is the science fiction novel Nightside City, a noir detective novel in a fascinating setting, and the first novel featuring P.I. Carlisle Hsing. Check out the description.

Daylight at the Edge of Town

Nightside City was built on the dark side of the Epimetheus, back when everyone was sure that the planet had stopped rotating. Now, slowly but surely, Nightside City was moving toward the dayside–and doom. Already the first rays of deadly sunlight had begun to hit the tops of the tall buildings of the West End, and that part of the city had become a ghost town.

So when private investigator Carlisle Hsing heard that somebody was buying up all that worthless West End property, she was intrigued. And when the clues pointed to a secret plot to save the city from dawn, she had to learn more. If such a plan could succeed, Hsing was all for it. But why keep something like that a secret?

Hsing was determined to find the answers. And suddenly her enemies were all too willing to show her the light.

Nightside City had one sequel: Realms of Light, released in October 2010 by FoxAcre Press.

At roughly a buck a book, this lot is a really terrific sample of one of the most popular and prolific fantasy novelists of our generation. If anything in this article has intrigued you, track down a copy and give it a try — and let me know what you think. In the meantime, I’ll be digging into these books during my trip to Florida over the next few days.

Nice one John. I too enjoy Lawrence Watt-Evans’ works. Actually have the Geoff Taylor War Surplus novels and was toying with possibly covering them in the future. I enjoy his Eshtar novels, they are light hearted and easy reading. One series I must really make a plan to get is The Obsidian Chronicles (Dragon Weather, Dragon Society,Dragon Venom.) They are still readily available I must just pick them up.

Thanks for the tip on “Why I Left Harry’s All Night Hamburgers”. Will keep an eye out for it.

I quite enjoyed the Lords of Dus series, but I never got around to reading his other fantasy stuff, like ‘The Misenchanted Sword’ and ‘With a Single Spell.’

I’ve read only The Obsidian Chronicles, beginning with Dragon Weather. Enjoyed the trilogy quite a bit.

Bob,
With a Single Spell was the first book of his I read. Still one of my favourites.

Never read any of his stuff, but boy, seeing all of those covers in the first picture takes me back to happy days browsing paperback spinners at the public library and/or poring over the selection at the local bookstore.

I like all of his books. Pickman’s Modem from Cthulhu 2000 was an odd and memorable short story.

I have only read one or two sci-fi/fantasy novels all the way through (wish I could do more but have a very hard time of it for some reason). Cyborg and the Sorcerers was one of them. Great article!