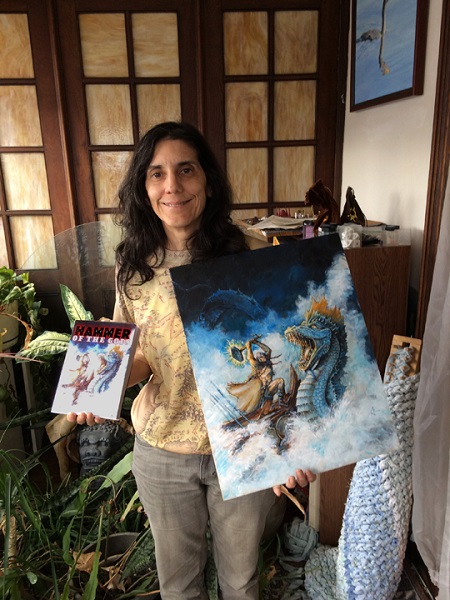 Cover for Hammer of the Gods, photo by E. Crowens

Lissanne Lake is a Sword and Sorcery fantasy illustrator with an artistic career spanning over thirty years. A New Jersey resident, she’s designed everything from book jacket and magazine covers to tarot cards, games and wall murals for public art projects and has also worked with famous authors such as Sir Terry Pratchett. On the side, she’s a fencing instructor, a re-enactor, and is learning to speak Japanese.

Crowens: Were there any particular artists from whom you drew your inspiration?

LL: Western art paintings and illustrations by contemporaries Charlie Russell and Frederic Remington. Comic book art most likely had its genesis from Russell, and certainly he was (Hall of Fame action-style Sword and Sorcery and comic book illustrator) Frank Frazetta’s hero.  Russell’s work always captured motion — the horses are charging, the bears attacking, and hats are flying off cowboys’ heads.

Were these strictly fine art paintings?

They were illustrations for newspapers. I believe he wrote the articles, as well.

Non-fiction taken with a grain of salt. (Lissanne showed me a book of Russell’s work.)

These almost look like storyboards for John Ford Westerns. He’d also be a contemporary of the famous photographer, Edward Curtis, but the problem with photography back then was that with slow film speeds and clunky, large equipment it was impossible to catch the action.

Remington worked from photos, but Russell went out and lived with the Indians and sketched respectful journalistic illustrations rather than caricatures.

When did real American comic art come into existence?

Around the late 1800’s. One of the first examples was The Yellow Kid, which is dated as far as racial attitudes are concerned, but important for historical documentation. There’s also Windsor McCay and Little Nemo. McCay was so amazing that he could draw a frame, flip it over and draw the next stage of an animation cell. Not many people can do that.

So you’d say that comic art is more of an American origin?

You had a lot of single illustrations overseas such as the images you’d see in Sherlock Holmes stories and The Strand Magazine. Even in the States, you had lots of single image illustrators such as N.C. Wyeth who would do inserts compared to what you would think of as graphic novels today. Wyeth also trained a lot of female illustrators who came after him. 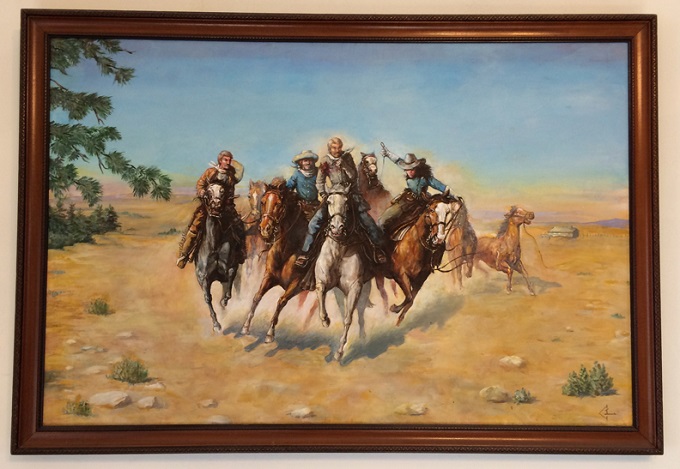 The award-winning “The Horse Thieves” (unpublished)

Tell me about some of the female illustrators from that time period.

My favorite is Beatrix Potter. I love her realistic animals with such expressions. She also wrote the stories.

It’s always a challenge to define the forerunners of science fiction and fantasy from this time period, because that genre was in the early stages of developing, both in art as well as writing even though we already had gothic horror. There were artists such as Maxfield Parish, but besides Weird Tales and a few other publications plus children’s book illustrations, fantasy art was a budding industry.

Let me note, however, that if you were male and talented you got promoted. Women weren’t so fortunate.

That brings me to that artist that painted those figures with big eyes, and there was a movie about recently.

Walter Keane. That was true. The judge really locked them in separate rooms to decide who the real artist was, and the husband said, “I can’t do it now. I hurt my hand.” His wife, Margaret, produced a painting identical to her other ones. She wanted credit for her work.

Writers had the same problem and still do. There’s E. Nesbitt rather than Evelyn Nesbitt.

We also have George Sand, and Sarah Cawkwell, who writes the Warhammer books, goes by S.P. Cawkwell. 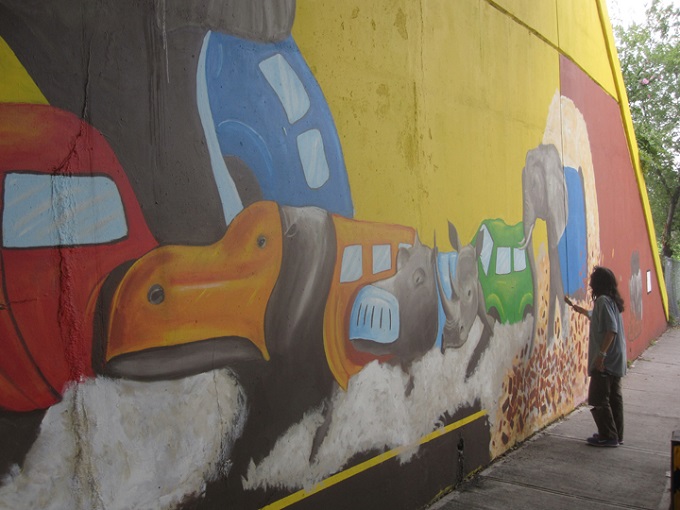 Have you ever encountered any situations where someone told you that they wanted a male artist?

Oh, yes. I’ve been told that I couldn’t do Westerns, because I’m a woman, and the way that I broke into the Sword and Sorcery field was that I found an English publisher who was willing to overlook gender bias in lieu of talent.

I’ve lost jobs, because male competition came in and said, “I need the job, because I have to support a family.”

In this day and age that’s unbelievable! Do you also run into situations where people would want to pay you less, because you are a woman?

They will pay you less unless you are savvy at negotiating the business aspect of the deal. I will keep this story fairly generic and anonymous, but once I swept the prizes at a convention competition. When the person running the contest found out that L. Lake was Lissanne Lake, this person turned blue, black and purple upon finding out. This was a male-only field for a long time, and women were not given a chance.

That’s something you wish they’d teach students in art school. So you knew right away that this was the career path you wanted to pursue?

Oh, yes. Illustration is not necessarily a painting skill. It’s a translation skill.

Actually it’s very similar to what I was doing in still photography when I was art directing movie posters, because I had to come up with one image that would say it all.

Absolutely. The final image not only has to convey what the book is about, but it also has to communicate what the publisher wants to say about this book — whether last month’s book had a blue cover, so now it has to be something like blue, but not blue now. Cover illustrations are also going to be different for each country.

Let’s talk about that. I’ve noticed that with fantasy books often you will have two covers — an American version and a European version, and it’s a totally different image. Why?

American versions will want to see a scene out of the book. They want to see character’s faces with upfront action. European versions want atmosphere showing a lot of the background. If the hero is in that version his/her face has to be hidden so you can project yourself into that person. The focus is more on where you are.

So in cinematic terms, the European covers feature more of a long shot?

Extensive background with perspective in the distance. If there is action, the hero is slightly turned away from the audience. An American version would have a front facing hero, much closer up showing a lot more emotion. Right now the current media only supports covers. With e-book readers it would be great to set up interactive software platforms where you can tap on something and see an inside illustration, or hear music, but none of the manufacturers will support those options right now. 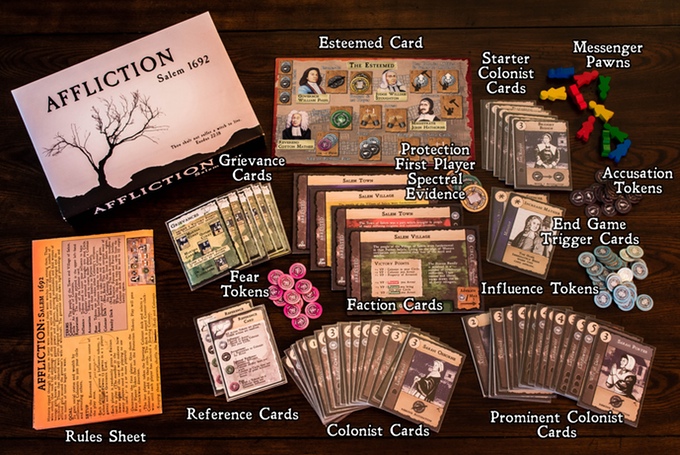 You’re talking about a hardware/software platform?

Could you imagine tapping on the background and hearing music or tapping on the character and seeing a specific scene with that character? It would give you options. The technology is already available. Just no one is doing it.

That’s an interesting subject to bring up since technology has obviously affected everything in publishing. Illustrators such as Remington or Russell would’ve never heard of an e-book or have thought along those lines.

When you are working on an assignment how much information are you given? Do you always read the whole book you are illustrating?

It varies. Often I might only receive a single paragraph and get virtually no descriptions of the characters. Once, I had an art director give me a sketch with an oval saying, “Beautiful face here.” 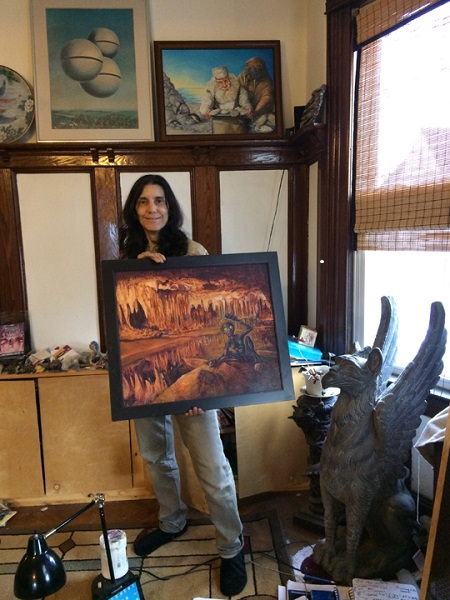 Holding Gollem, “All Thoughts Bent Upon It,”
Middle Earth, Iron Crown Publications. Upper right,
“The Walrus and the Carpenter,” unpublished

OMG! That’s hilarious. Now, do you need to submit a thumbnail?

I do a fully rendered sketch, which is often a composite of pencil sketches. With Sword and Sorcery, since placement of the items is so crucial I don’t do revisions. Thank heavens no one does this anymore, but I hated it when someone would ask me to submit three sketches and they would want to pick out one from Column A and two from Column B. It doesn’t work well and defeats the impact of the overall design. I also paint from live models.

Before we forget, I’d like to bring up the subject of your intriguing sideline passions — those being traditional combat fighting and learning Japanese. Did you start learning Japanese to go over to Japan to learn martial arts?

No, I’m fascinated with the language, and I like watching anime and manga. A lot of it isn’t translated very well.

I wanted to tell the readers of Black Gate that Lissanne and I met in Bartitsu classes, a Victorian martial arts form reminiscent of what Sherlock Holmes would’ve used in his stories. But you are also a fencing instructor. How long have you been doing that?

I’ve been doing that longer than I’ve been an illustrator. It started with re-creation fighting where you take weapons and re-enact the Battle of Hastings, but not with the SCA. We use metal armor and real weapons, but ones that aren’t sharp. My range includes Roman, Medieval, and rapier dueling. Since I’m short, I look like a twelve-year-old boy in a battle scene. However, I don’t really get involved in electric sport fencing. What I do is more traditional and realistic.

I want to assume that your knowledge of fencing is going to be advantageous to your fantasy illustration, because you understand the physical movements.

Definitely. I’m not going to draw someone holding a sword with their hands behind their horns on their helmet. Look! You’re going to get killed. You can’t bring your hands down. It might look good, but it’s not functional. You need to keep your sword in front of you and use it as a shield.

Finally as we close this interview, what kind of advice would you give to an artist who wants to break into this business?

Check out submission policies online, and I’d suggest sending digital samples to everybody. You never know when someone is in a jam. There isn’t a slush pile of artists like there is with manuscripts.

Elizabeth Crowens is a Hollywood veteran, journalist and author of Silent Meridian, an X Files for the 19th century steampunk novel series, finalist for the 2016 Cygnus Awards in Speculative Fiction and the Goethe Award in post-1750’s Historical Fiction. www.elizabethcrowens.com, Facebook: @BooksbyElizabethCrowens, Twitter: @ECrowens