Jim: I’m from Jackson Heights. She is from Canarsie… originally. It’s like the line from Captain America: Civil War when he meets Spider-man. Captain America is fighting him at the airport and says, “You’ve got heart, kid. Where are you from?” and Spider-man says, “Queens.” Captain America looks at him and says in a confrontational tone, “Brooklyn.”

Jim: Best line in the movie.

END_OF_DOCUMENT_TOKEN_TO_BE_REPLACED 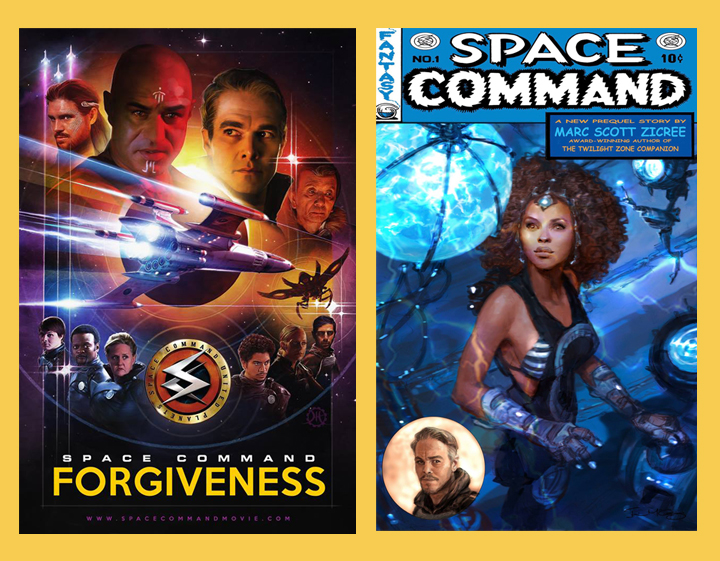 Crowens: I wanted to interview someone whose focus was not only the entertainment industry but also science fiction. Previously, almost everyone I’ve interviewed has been involved in fantasy or horror. After following you on Facebook I really wanted to interview you. Right away, I’ve been able to pick up on your “contagious enthusiasm” and high energy.

Zicree: Glad I could do it.

What was your very first job in the entertainment industry, and how did you get your foot in the door?

I grew up reading in the genre watching the original versions of Star Trek, The Twilight Zone and The Outer Limits, and I started going to science fiction conventions when I was a teenager growing up here in LA. My heroes were the writers. There was a lot of crossover from the stories I read and the writers from those three shows: Richard Mathieson, Theodore Sturgeon, Ray Bradbury, George Clayton Johnson, Harlan Ellison… they were all doing books and TV shows. When I was ten, I heard Ray Bradbury speak at a local library — a huge influence, and I became a big fan. When I was around fifteen or sixteen-years-old I started going to conventions and meeting them, and from there they became mentors.

There was also a radio show on KPFK in Los Angeles called Hour 25, and they interviewed all the great science fiction writers. Around 1973 when I was eighteen, I wrote a half hour radio play that was a satire of science fiction conventions, TV shows and movies called Lobotomy. So, I wrote, directed and acted in it with three of my friends and it aired on KPFK. On that same show, I heard Harlan Ellison talking about the Clarion Writer’s Workshop. When I was nineteen and an art student at UCLA, I attended Clarion that summer. It was at Michigan State University. The students included people like Kim Stanley Robinson and Robert Crais, who became well-known science fiction and mystery novelists, respectively. Our teachers were Gene Wolfe, Roger Zelazny, Samuel R. Delaney, Kate Wilhelm, Damon Knight and Joe Haldeman – all very famous and accomplished science fiction writers. It was a great lineup.

END_OF_DOCUMENT_TOKEN_TO_BE_REPLACED 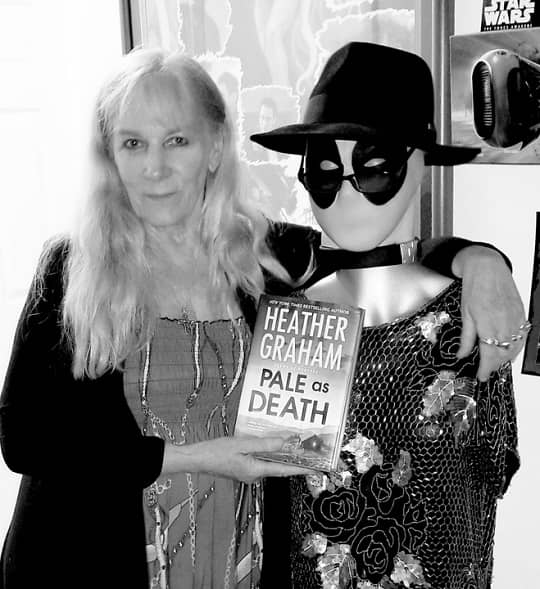 Elizabeth: Heather, of all people you’ve not only explored many genres but often you’ve blended them together.

Heather: Recently at ThrillerFest, I encountered other authors who had a stigma against horror and its association with slasher themes. If it has ghosts or similar phenomena call it paranormal. I’m so glad now that genres do cross so much. Seriously, Conan the Barbarian — great romance. Look at the love between the two of them. Star Wars — its adventure but it’s a romance, too. My first sales were romance novels.

How many books have you written, and how long have you been writing?

END_OF_DOCUMENT_TOKEN_TO_BE_REPLACED 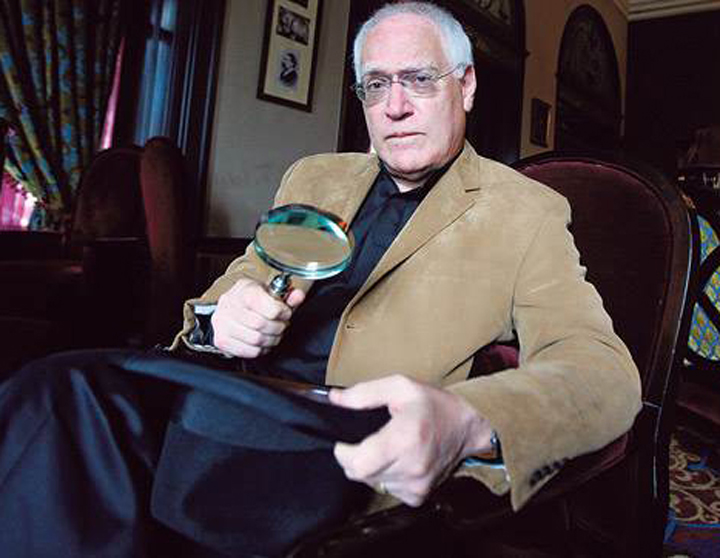 An Interview with Leslie S. Klinger

Crowens: What drew you to the Victorian era? That seems to be the common thread for most of your books except for your annotated graphic novels.

Klinger: When I was young, I was a big science fiction reader. In my second year of law school, my girlfriend bought me a copy of the William S. Baring-Gould Annotated Sherlock Holmes. I was hooked. Like most people, I probably read one or two stories as a kid, paid little attention to them, and wasn’t really interested in mysteries. Then I started reading this, and I enjoyed the footnotes — the idea that there was this scholarship. One of my responses to the Baring-Gould edition was a weird one: Some day when I’m old and retired, maybe I’ll be the person who will update it. I became immersed and decided I was going to become a Sherlockian.

In 1976, there was a classified ad in the Baker Street Journal placed by somebody selling his collection of 300 books, a real collection, not like the junk I’d been buying. It was very expensive… like thirty-five hundred dollars. I talked it over with my wife. For that time that was a lot of money. She said, “You’re the kind of person who should be a collector. Go for it.”

Suddenly I had the core of a really good collection and became known in some small circles as a nut about Sherlock Holmes. I started giving talks about Sherlock Holmes, and I got invited to a dinner at the BSI back in 70s. It was one of those bucket list things where I never thought about it again. In 1995 a friend arranged for another invitation. I went to the dinner, and I haven’t missed one since then.

END_OF_DOCUMENT_TOKEN_TO_BE_REPLACED

When I was doing the episode guidebooks for Buffy, I was taping Joss Whedon… Remember when Spike moves into the crypt? It was pitch-black dark in there and we were sitting on the crypt for our interview. It had been hard to get him, because he was been busy. I had sat waiting and waiting with these old-fashioned tape recorders that looked like movie cameras, and for both of them the batteries had run down and the tape was spooling out. When we got outside in the bright sunlight, I saw what had happened. I had been going for days without much sleep and there was my interview with Joss… not. The first thing I did was say the f-bomb and then, “Why you? Why you?”

He fixed the tape and said, “It’s okay.” I put more batteries in and asked, “Can you say everything you said over again? And he said, “I’ll try.” I was so embarrassed. But we got it done, and he was great. So articulate and smart.

How often did you get over to the set?

If you add all the days together, I was probably on the Buffy set for the total of a month. I was over on Angel, maybe a week or two.

Buffy had been set up in some empty warehouses in Santa Monica in this place called Bergamot Station. Mutant Enemy was there, and they had all the Buffy stuff there plus the writers offices and post production for Angel. When you went to Angel, it was very Hollywoody, because it was on the Paramount lot. You had the golf cart guys, the scrolly gates at the front…

END_OF_DOCUMENT_TOKEN_TO_BE_REPLACED 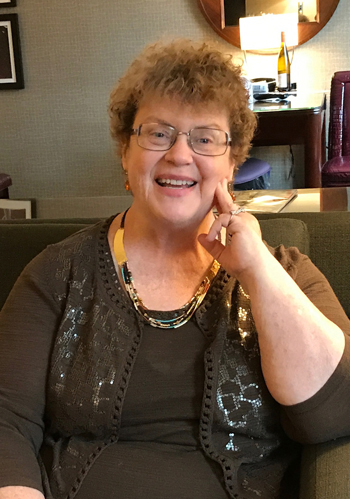 I had the pleasure of interviewing Charlaine Harris at the 2017 Bouchercon, a mystery convention held this year in Toronto. Charlaine has written dozens of books from the Sookie Stackhouse Southern Vampire series that was made into the television series, True Blood on HBO to the Midnight series, which is now featured as the Midnight, Texas series on NBC.

One of the things I wanted to focus on in our interview is that you’ve been involved so many adaptations of your work. I know you’ve been writing for a really long time, but I have to ask you — when you were in your twenties what did you visualize? Did you think your career was going to take this turn?

Charlaine: Who could ever imagine this? I’ve met people I never thought I’d be in the same city with much less dining with and watching them work and then feeling… at least lip service… lucky to be meeting me! I thought, “This is just crazy and weird.”

END_OF_DOCUMENT_TOKEN_TO_BE_REPLACED

Nancy Kilpatrick is an award-winning writer and editor. She has published 22 novels, 1 non-fiction book, over 220 short stories and 6 collections of her short fiction, comic books, a graphic novel, and she has edited 15 anthologies. Her work has been translated into 7 languages. Although not all vampire-themed, it’s all focused on the dark realm.

I noticed on your Amazon Author’s Page you did a non-fiction book about the Gothic movement.

I wrote one non-fiction book, The Goth Bible: A Compendium for the Darkly Inclined. At the time I did that I was pretty much smack in the middle of the Goth world. The agent I had at the time approached me and said there was a publisher looking for a book on goth. When I contacted the publisher, he and I had a conversation, but he was looking for something with the slant of discouraging people from getting involved in the goth culture. This wasn’t what I wanted to write so my agent shopped it around, and there was a bit of a bidding war. Finally there was an editor at St. Martin’s Press who used to be into goth when he was younger, so he bought it, but unfortunately just at 9/11, which was a paralyzing time for the publishing industry.

END_OF_DOCUMENT_TOKEN_TO_BE_REPLACED 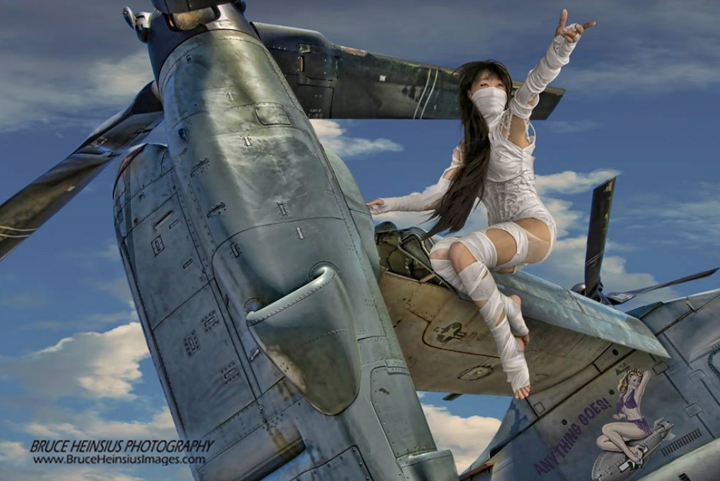 I wanted to preface that when I first met Bruce, we were both working as Still Photographers in Hollywood, and he was on Power Rangers, which has made a comeback with a new feature film after twenty-five years or so.

BH: I worked on the television show the first season shooting everything from action on the set to special shoots for calendars, trading cards, video box covers and magazines.

You and I have been out of touch for a while, but we reconnected on Facebook, because you took photos of someone else I was already friends with, and that’s when I noticed you started taking photos of cosplayers at conventions. Why don’t you share with the readers how you got involved with that?

Back in 2006, I was supposed to be doing a movie shoot. When I showed up, the person who hired me apologized and said he forgot to tell me it was cancelled because everyone was going to a cosplay event instead. So, I tagged along and was surprised how many comic book and animé characters were there. I wasn’t really doing action photos on that first event, but I still tried to create good portraiture while photographing people in costume.

END_OF_DOCUMENT_TOKEN_TO_BE_REPLACED 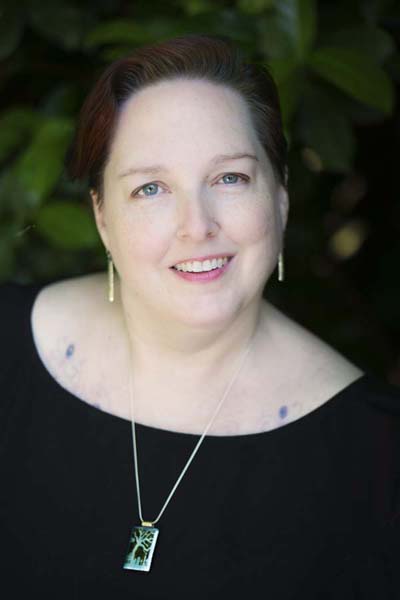 Your specialty seems to be YA.

Yes, it has turned into that, but that wasn’t always the case. In the past, I did a lot of tie-in fiction for Shadowrun (cyberpunk with magic) and Battletech, which was Young Adult, but Shadowrun was not. I’ve had the most acclaim for my YA work, and every YA novel I’ve written has been nominated or has actually won an award.

This seems to be a success formula for you.

END_OF_DOCUMENT_TOKEN_TO_BE_REPLACED 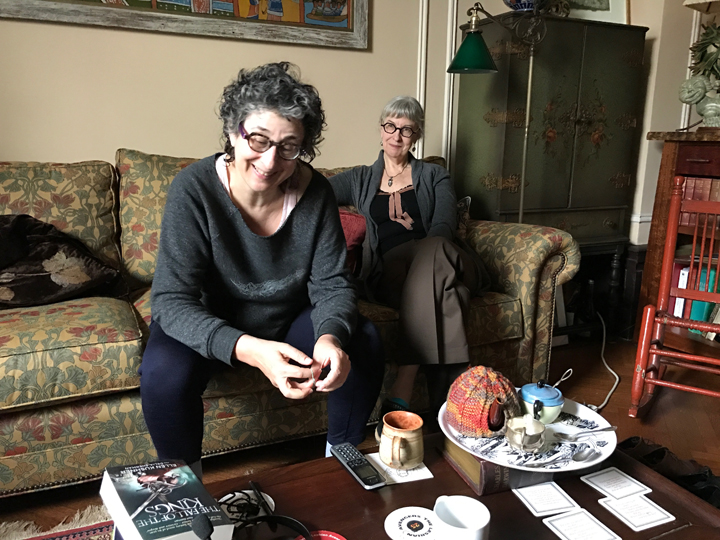 Ellen Kushner is a former editor at Ace Books and Pocket Books, hosted the national public radio series Sound & Spirit via WGBH in Boston and was the winner of the 1991 World Fantasy Award, 1991 Mythopoeic Award and 2007 Locus Award for Best Fantasy Novel, has won Audie Awards, etc.

Delia Sherman is a former consulting editor from Tor Books. Her novel The Freedom Maze won the Andre Norton Award for Young Adult Science Fiction & Fantasy, a Prometheus Award, was a SWFWA winner, and made the Tiptree Honor List. She won the Mythopoeic Award for The Porcelain Dove, etc.

You were married in 1996 and are one of the long-time couples of speculative fiction. How did the two of you meet?

Ellen: Actually, we were married many times — illegally in 1996 and legally in the State of Massachusetts in our backyard there in 2004. Jane Yolen introduced us at Boskone — not for any romantic reasons, but because Delia had taken a course in writing fantasy at the U. Mass, Amherst.