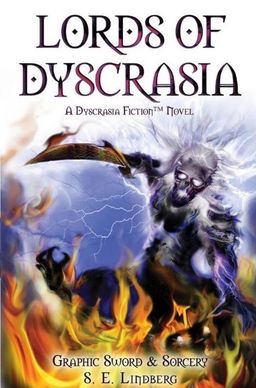 I met Seth Lindberg at the World Fantasy Convention back in October. He co-moderates the Goodreads Sword & Sorcery Group, one of the rare groups that pays a lot of attention to genre magazines, like Cirsova and Beneath Ceaseless Skies. He also maintains a fairly active (and excellent) blog — check out his recent reviews of Joe Bonadonna’s Mad Shadows II, and Skelos issue #1.

Lords of Dyscrasia (an abnormal or disordered state of the body or of a bodily part) is touted as “Graphic Sword and Sorcery,” but to me it has more in common with the dark fantasy of Clark Ashton Smith and the gothic tones of Mervyn Peake’s first two Gormenghast books. There is some nice Lovecraftian shading to this novel, as well, with a touch of Edgar Allen Poe to lend it a feverishness of tone, and even a psychedelic flavor in style.

While Lindberg channels his influences with a deft hand, he has mapped out a beautifully grotesque world that is truly his own unique creation. This book was described to me as being part of the Grimdark subgenre of dark fantasy, and it is indeed a grim, dark tale….

This is a complex and well-written novel, very difficult to describe. The settings and the atmosphere are rich in color and texture, and story’s pace is almost relentless: it rushes along like a bullet train, with very few stops along the way. Although Lysis Endeken is the main character, it is the weird and wonderful Doctor Grave who really rises above all others.

I bought a copy of this novel from Seth at the convention, and I’m glad I did. It’s become the foundation of a popular new S&S series, and the second volume, Spawn of Dyscrasia, was published in 2014.

Here’s the description for Lords of Dyscrasia, from the back of the book.

A blood disease plagues the insectan elders of the Underworld. Desperate to save them from extinction, the golem Doctor Grave infuses the soul of his dying Queen into the blood of a human artisan, Lord Ante Lysis. Her soul passes through Ante’s blood into his offspring, thus the Lysis bloodline carries the diseased Queen’s soul until the Doctor can execute a grand necromantic rite to resurrect her.

Endenken Lysis of Gravenstyne, last lord of his Clan, journeys to the Underworld Forge to extinguish the elder plague consuming his soul. Accompanied by the ghosts of the family whom he failed and the brothers whom he murdered, Endenken must battle his past and the Doctor’s minions to end the plague, quench the Queen’s soul.

In addition to all his other talents as an author, moderator and reviewer, Seth is also a talented artist. He did the cover to Lords of Dyscrasia, and it looks like he created the cover for the sequel too,

Thanks for the kudos and the shout-out, John. And thank you for the great review of MAD SHADOWS II, Seth. I’m glad you two guys met — both of you are stand-up gentlemen I am proud to call my friends and colleagues.

John, wow! Appreciate the shout out. It was great meeting you in person at this year’s World Fantasy Convention (a meaningful event for Blackgate when it received its award!).

To clarify credit,the sequel cover is a Ken Kelly commission.

For readers looking for a forum for group reads, all are welcome to join us over in Goodreads.

Thanks for the invite to the Goodreads group, Seth. Although truthfully I’ve been spending more time on your blog recently. Keep up the good work!

After reading this post I ordered both books in paperback, and thanks to the Amazon match program started reading the first as an ebook immediately. Really enjoying it so far! Thanks to John and Black Gate again for pointing me to great stuff i hadn’t heard of!

Black Hood, Glad you are enjoying the Underworld! I think you’ll find the experience unique. If you want audible credits or more info on the series, you can track me down via the blog John mentioned (http://www.selindberg.com/).

John, kind words coming from you means a lot (there are no units of measure available for that appreciation, so I hope your engineering mind is okay with dimensionless feedback). Truly appreciate the connections you drive, in addition to all that Black Gate provides. I’d say you are my one true love, but some may misinterpret that…

Joe, note that my Mad Shadows II post is more of mini-review trailer. An in depth review is forthcoming as I finish reading, but it is already clear that anyone who enjoys mystery & dark adventure will enjoy your gothic-noir Dorgo stories. Fun stuff.