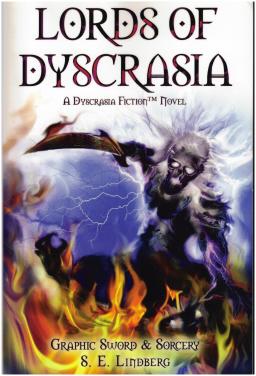 S.E. Lindberg is an original voice in fantasy. His prose is lush and colorful, and his style leans toward that of classic literature, without being stilted, self-conscious or pretentious. He has a gift for putting words “down on paper” and constructing sentences that flow with a poetic nuance.

Lords of Dyscrasia (an abnormal or disordered state of the body or of a bodily part) is touted as “Graphic Sword and Sorcery,” but to me it has more in common with the dark fantasy of Clark Ashton Smith and the gothic tones of Mervyn Peake’s first two Gormenghast books. There is some nice Lovecraftian shading to this novel, as well, with a touch of Edgar Allen Poe to lend it a feverishness of tone, and even a psychedelic flavor in style.

While Lindberg channels his influences with a deft hand, he has mapped out a beautifully grotesque world that is truly his own unique creation. This book was described to me as being part of the Grimdark subgenre of dark fantasy, and it is indeed a grim, dark tale.

Lindberg’s “dyscrasia” is a really nasty plague — a disease of the blood that has infected the insectoid and avian elder lords of the Underworld. The disease also affects pregnant human women, who give birth to mutants — hybrids of human and elders — if they don’t die during pregnancy, that is. 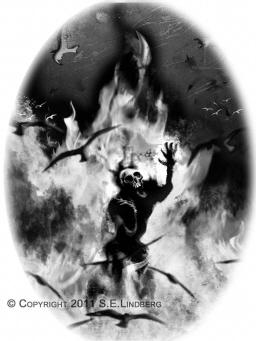 The lords of the Underworld are also on the verge of extinction: their Queen is dying. In order to save the elders, a golem named Doctor Grave injects the soul of the Queen into the blood of a human aristocrat, Lord Lysis, who then passes her soul onto his descendants. As a result, they can only mate with those who share their blood and the disease.

Now the main character of the story is Lord Endeken, last descendant of Lysis, and he desires to marry a woman who is not of his bloodline. The Picti are Endeken’s people, and they worship the elder gods of the Underworld, but he doesn’t. He refutes his birthright and rebels against the religious practices of his people, which puts the curse of the plague on their realm of Gravenstyne.

What happens next is the story of a man whose choices destroy not only his people, but all that he loves and holds dear. Seeking his revenge against gods and shades of the dead, he passes through death and enters the Underworld. And everything revolving around Endeken is orchestrated by the mysterious Doctor Grave, who has his own plans and his own purpose.

This is a complex and well-written novel, very difficult to describe. The settings and the atmosphere are rich in color and texture, and story’s pace is almost relentless: it rushes along like a bullet train, with very few stops along the way. Although Lysis Endeken is the main character, it is the weird and wonderful Doctor Grave who really rises above all others. 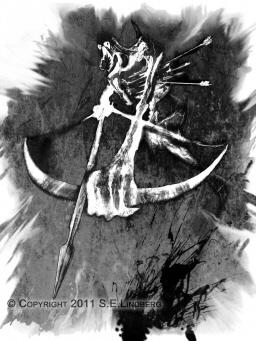 He is a very cool and unique creation, and I found myself more interested in him than I did for Endeken’s quest and what happened to him along the way. For me, Endeken wasn’t fleshed out enough, and I never felt anything for him, couldn’t relate to him. On the other hand, Doctor Grave emerges as a strong and sympathetic character, and he is far more interesting than Endeken. The golem comes across as being more human than does the human character.

I think what’s missing here are some quieter, more reflective moments. The human drama is often slighted in favor of action scenes and a fast-paced narrative. There is a lack of insightful and character-revealing dialogue, too — dialogue that could convey information and move the story along in ways that exposition can’t always do. I wanted and needed more character interplay, especially between Endeken and his family; so little time is spent with them. I think Lindberg should have gone deeper into their relationships, their lives, and given us a real sense of family so that when events unfold, we really feel for these characters and for Endeken in particular. This is my take on it, at any rate.

That being said, this is still a wondrous reading experience. I believe this is Lindberg’s first novel, and it’s an impressive one. He knows what he’s doing, and I have a feeling that he’s grown as a writer, and has mastered the art of pace, dialogue and character since this book was published four years ago.

Lindberg is the real deal, a gifted writer with a strong command of language, and a soaring talent that stretches beyond the verbal: he illustrates his novel with his own wild and weird and excellent drawings. If you like action-packed dark fantasy with bizarre settings, an original premise and clever twist, then add this one to your Must Read List.

I’ve been a fan & blog follower of Blackgate for over 5 years, and am truly honored to have this review posted. I’m also a fan of Joe Bonadonna’s Dorgo series, so to receive feedback from him is especially meaningful. Sincerely appreciative, Seth (SE).

You’re welcome, Seth. And thank you for the props, too.

Wonderful review, and well deserved. Lords of Dyscrasia is heroic fantasy for the literate mind, and I wish there was more of it. Original and inventive, with a strong set of historical underpinnings to give gravitas to the story, Lindberg fearlessly spins tales, sometimes lyrical, sometimes dark and bloody, sometimes tender, that we hope will someday be classics.

[…] Praise for Dyscrasia Fiction Black Gate Magazine raves: “Lindberg is the real deal, a gifted writer with a strong command of la…a […]

[…] Praise for Dyscrasia Fiction Black Gate Magazine raves: “Lindberg is the real deal, a gifted writer with a strong command of la…a […]