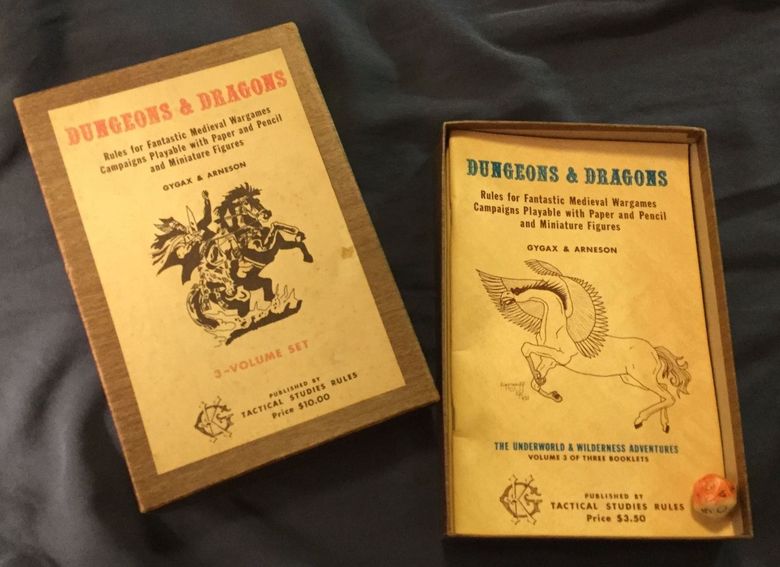 A first printing of the original woodgrain box edition of Dungeons and Dragons, one of the rarest RPG collectibles, sold on eBay Friday for $22,100. The seller tells the story of how they acquired this ultra-rare piece of gaming history in the item description:

This set is in Very Fine condition with one small stain on the front label and very minor scuffing on the corners of the box. Note that the Reference Sheets are not stapled, but loose sheets folded together. This was the original condition.

It was acquired by the present owner in an interesting way.

In 1974 I worked in a project offering supplemental educational materials to four school districts in Northwestern Wisconsin. I met Bill, an elementary school librarian, who was very excited about working with his students using role playing games. He had a friend in Minneapolis whom he had met through their shared interest in war gaming. This friend, “Lance,” was involved with creating a new project, a fantasy-style wargame in a box that could be played by anyone.

My librarian friend was working with a sixth-grade class to create a book based on playing the game. Included in this set is a copy of the booklet that his students created using the game. Bill also used a 20-sided die that he had hand-colored to differentiate scoring. Adding to the charm of this set, the die is included, as is a hand-written note from Bill, the librarian, explaining the use of the die. He added that there was currently a shortage of these dice, but they were available in England. He was going to England for a vacation, and would be bringing some back with him.

I’m not sure this is a record price, but it must be pretty close. It’s definitely one of the most high-profile sales of a D&D collectible in recent memory. The seller, editorjan_1, has never previously sold on eBay, and has a zero feedback score, which makes this auction something of a risk for the buyer. See the complete listing on eBay here, and a more detailed breakdown of everything in the box at acaeum.com.

It’s amazing what this stuff goes for now. I slowly collected the first 100 issues of Dragon Magazine over the last few years. I then recently decided to sell some of them to finance a newer hobby. I didn’t sell them on eBay but to well-known RPG online seller. I was shocked how much I got for the first fifty issues. (The value drops dramatically after that issue.) If I had been willing to wait, and do the hard work of eBaying them, I’m sure I would’ve gotten even more.

Yeah, Dragon magazine went through a period of rapid price accumulation in the 80s and 90s, and then just as rapidly crashed. I was able to buy issue #6 for $8 about 20 years ago. I suspect it’s worth more now.

Dungeons and Dragons was the root source for some of the most valuable intellectual property in the world today, including World of Warcraft, Mass Effect, and the multi-billion dollar online RPG industry. There are tens of millions of gamers around the world for whom this is a valuable piece of history. When you get numbers like that, prices start to increase pretty dramatically.

Impressive. Collecting RPG’s has become a hobby on its own. Even games which by these days standards may be unplayable can garner a decent price based purely on their age and condition. Every so often one comes across such a treasure trove on eBay, a guy selling his collection or attic finds etc.

I hear you on the Dragon magazines. My collection #100 up was easy enough to do, but when you start dropping into the first 50 magazines…

It’s not the same as collecting the actual magazines, but here’s a link to pdfs of the first 250 issues.

Wow! That’s a great link! I just wasted way too much time looking through early issues.

My physical Dragon collection only starts in the mid-40s, and, given the number of detached or semi-detached covers, etc., likely won’t be funding my retirement. Which is fine because I have no intention of selling them.

I do have the Dragon Archive on CD (which I assume is the source for the PDFs linked above), but it’s not quite the same — maybe someday I’ll try to start filling in some of the gaps …

Thanks for the link James, will be sure to check it out. Agree with Joe H, while enjoyable its not quite the same.

Must say one of my reasons for trying to collect from way back issues was to try and make head or tail of the Wormy comic strip.

“Must say one of my reasons for trying to collect from way back issues was to try and make head or tail of the Wormy comic strip.”

Haha! That cracked me up! I know what you mean though. Sometimes that Wormy strip would be just one gloriously painted frame. I think it took a year for Wormy to get through just ONE game of pool!

Does anybody remember the ongoing tease of What’s New with Phil and Dixie? Every issue they were supposed to talk about sex and D&D, the next next issue.

> I do have the Dragon Archive on CD

That CD DRAGON archive is quite the collector’s edition on its own… WotC was forced to stop selling it because they didn’t arange for rights with any of the contributors (whoops), and it is now a very rare collectible. I got a review copy 20 years ago and never opened it… I should probably take good care of it.

> Must say one of my reasons for trying to collect from way back issues was to try and make head or tail of the Wormy comic strip.

Tiberius — you’re not the only one! WotC (and others) made countless attempts to assemble a collected edition, but the creator, Dave Trampier, wanted nothing to do with it. He famously left the gaming industry in disgust 30 years ago and became a cab driver.

There are virtual collections of Wormy out there, like this one:

Sadly, Dave Trampier died two years ago. They mystery of his withdrawl from gaming died with him.

> Does anybody remember the ongoing tease of What’s New with Phil and Dixie? Every issue
> they were supposed to talk about sex and D&D, the next next issue.

You know, they eventually DID do a “Sex and D&D” series… I think it might have appeared first in one of the collected volumes from Palliard Press in 1994. The strip also appeared in THE DUELIST magazine for a while,

For folks who want to know more about the fate of the Wormy collection, Trampier apparently WAS contemplating a Kickstarter to fund one, just before he died.