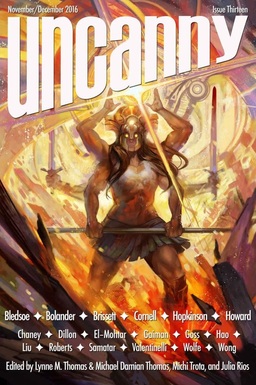 The November/December issue of Uncanny is all about alien invasions and fairy tales. Here’s Bob Blough from his Tangent Online review, with some high praise for the stories within.

This is my first read of this magazine and I am impressed. By this small taste I can tell that the editors favor good writing and well-crafted prose.

Paul Cornell has written one of Britain’s “cozy catastrophes” in “Don’t You Worry, You Aliens.” In fact the catastrophe is never explained. Suddenly people seem to be moving away. The protagonist, the local librarian, states that before the BBC went completely off the air it commented that no virus or plague seemed to be the cause. In any case, the librarian – an old man – is left completely alone in a small village with no electricity, internet or telephone. This story is a day in his life as he putters around town feeding his neighbor’s dog, and checking his garden. It is an elegiac story told at the pace of the elderly and is a beautiful miniature of his life. I must admit it has stuck in my mind. A very compelling story…

In “Kamanti’s Child” Jennifer Marie Brissett drops us in media res in an alien battle between two races. I like that tactic as we have to really follow all the clues to understand where we are and what is happening. A quiet village living off the land is invaded by another group. Kamanti, a pregnant alien woman survives the attack. She decides to travel to a city of her own kind. Along the way we are introduced to her daughter telepathically from her womb and the invaders called hoomans. Even as we see that we are the attackers it is stated that all of this world is related. So, an Earth so far ahead that we have developed into different species? An alien planet that has developed us into different species? Still the mystery continues and we learn just enough to get through this story…

The cover this month is Julie Dillon’s “Impact Crater.”