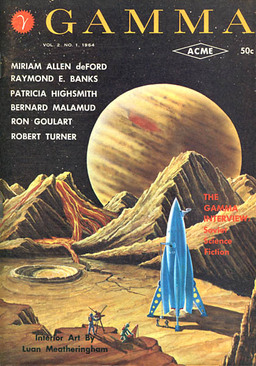 Here’s a bit of a curiosity — a magazine I had not heard of until quite recently.

Gamma was a short lived digest magazine published out of North Hollywood, CA, between 1963 and 1965. Five issues total were published, the first three edited by William Nolan (best known, probably, for writing Logan’s Run with the recently late George Clayton Johnson, but an active writer since 1956 and still publishing new stuff now, age 88). Because of its location*, perhaps, they attracted some writers associated with the movie business, and in general published a mix of SF and Fantasy, and of writers both from within and without the genre, that reminded me of F&SF, especially in its first few years.

*(Indeed, of the 9 writers in this issue, 7 (as far as I can tell) were based in California, and those who weren’t (Malamud and Highsmith) are the most prominent and the only “non-genre” writers.) The interior art is by Luan Meatheringham, an LA artist active in the ad industry and as a freelancer, who seems to have disappeared from notice.

The cover is called “Expedition to Jupiter,” by Morris Scott Dollens, and it depicts a spaceship and a couple of astronauts on what I take to be Ganymede or Callisto, with Jupiter in the sky.

There is one feature, an interview with the editor (using a false name) of a Soviet publishing house, discussing the state of Soviet SF. (By coincidence, I just read a similar piece in Amazing.) 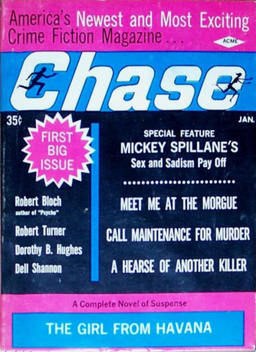 Robert Turner was a veteran writer, mostly, as far as I can tell, of crime fiction — I found a review of an Ace Double by him, backed with one of Steven Marlowe’s mysteries. (He also worked as an assistant editor for Chase, a mystery magazine that was originally planned as a companion for Gamma, but somehow ended up coming out from Health Knowledge, Inc., under the nominal editorship of Robert A. W. Lowndes.) “The Girl of Paradise Planet” is about a henpecked husband who comes to the title resort planet. In the strange ocean he meets a beautiful woman — apparently a mysterious native? They start to develop a relationship, but of course the man’s wife is not happy, and, anyway, can this come to anything if she’s an alien? There’s a twist ending coming up … Not much of a story, really, though it bounces along OK. Never makes any sense though, least of all scientifically.

Shelly Lowenkopf was another veteran mystery writer, who published three short stories in the SF field according to the ISFDB. He’s still alive, now 84, apparently teaching writing. “The Feather Bed” is a decent little satire, about a writer in a future where nobody writes new books, according to union rules. Instead, books are destroyed periodically, and the union writers rewrite them. So the hero of this story, sick of writing King Lear for at least the second time, having previously written Madame Bovary, rebels, with disheartening results.

Bernard Malamud of course needs no introduction. “Angel Levine” is a reprint (very much like some of the stories F&SF used to reprint by mainstream writers — find a fantastical piece and reprint it, raise the tone of the magazine). It’s pretty good, too, about a tailor named Manischevitz who falls upon hard times culminating in his wife’s illness and then encounters a man who claims to be an angel — and who is also a black man in Harlem. Manischevitz has a hard time believing, but if an angel might save his wife’s life? As I said, pretty good, though not for the fantastical content.

Edward W. Ludwig is presented in the blurb as a widely published SF writer that most readers would know, and indeed he had published close to 20 stories by this time, beginning in 1950. And supposedly a novel was right around the corner. But I confess I only barely knew the name — I suspect I ran across one of his ’50s stories sometime. The thing is, “The (In)Visible Man” is almost the last story he published. A couple more appeared 15 to 20 years later, and his novel finally appeared in 1970 (to almost no notice). I don’t know why he stopped writing. though perhaps he felt he wasn’t getting anywhere. This story is about a man who has tried to become invisible, with the notion of getting away with crimes as a result — and it works, but he finds there are drawbacks to being invisible. OK work. 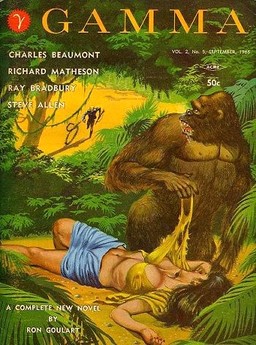 Miriam Allen deFord is an interesting case — she was born in 1888, and published her first SF story in a genre magazine in 1944, when she was 56 (though she had published other fiction, some SFnal, since at least 1924). She was fairly prolific over the next three decades (she died in 1975, aged 87), publishing several dozen stories, often with mystery elements. She also wrote mysteries, and worked as a journalist, including working for Charles Fort for some time. She had a reputation as a solid writer, but, perhaps because she never published a novel (though several non-fiction books, including one about Bonnie and Clyde), she seems largely forgotten now. “Inside Story” is about a multi-species exploration team that comes to a promising planet for colonization, but runs into trouble they never understand — but we do, as we realize that a massive intelligent being lives inside the planet. Pretty minor work.

George Clayton Johnson, who died just last year, was known as a writer mainly for his collaboration with Nolan, Logan’s Run; and for writing the first regular Star Trek episode. He actually wrote relatively little non-media SF. He was a very popular and colorful figure in SF fandom for decades. “The Birth” is a minor piece, about a certain person coming to consciousness — we quickly realize (before the author footstamps it) which famous literary creation he is.

“Society for the Prevention” is one of Ron Goulart’s Barnum System stories, and it’s fairly amusing, in which a man explains why he hasn’t sold all the wicker baskets he was supposed to, while foiling the invasion of a group of aliens, and by the by meeting a pretty girl from the Young Girls Space Police and Welfare Committee. Nothing earthshaking, but entertaining enough.

Finally, “The Snail Watcher,” by the legendary crime writer Patricia Highsmith (The Talented Mr. Ripley etc.), is pretty straight horror, about a man who decides to collect snails, with unfortunate consequences. Effective enough.

In all, this is a decent magazine mostly — in general the quality of the fiction is quite solid — but I have a sense that its scope was limited — it would never be awful, perhaps, but it probably would never have been great either.

Rich Horton’s last Retro-Review for us was the August and September 1964 issues of Fantastic magazine. His website is Strange at Ecbatan

Thanks Rich.
I always enjoy these pieces about odd short lived magazines.