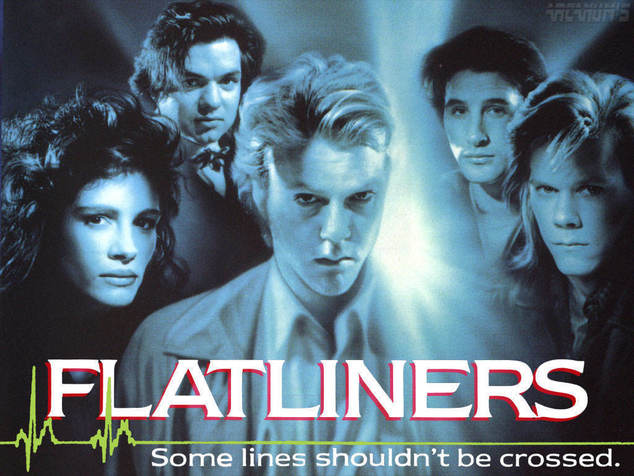 Back in 1988 a then-unknown Boston screenwriter Peter Filardi had an idea for a story based on a very personal source; a close friend of his suffered a severe allergic reaction to the anesthesia after an operation and had a near-death experience.

Filardi went on to write The Craft and Salem’s Lot, but in 1990 he and director Joel Schumacher (St. Elmo’s Fire) turned that potential tragedy into the very lucrative film Flatliners.

The original Flatliners followed a group of medical students and close friends who conduct experiments with near death experiences. Each one has their heart stopped before being revived instantly, which causes them nightmarish visions, reflecting either sins they have committed or sins committed against them.

As you can imagine, their unorthodox extracurricular studies have very dark consequences, as the supernatural apparitions they experience during their “deaths” begin to follow them into the living world. 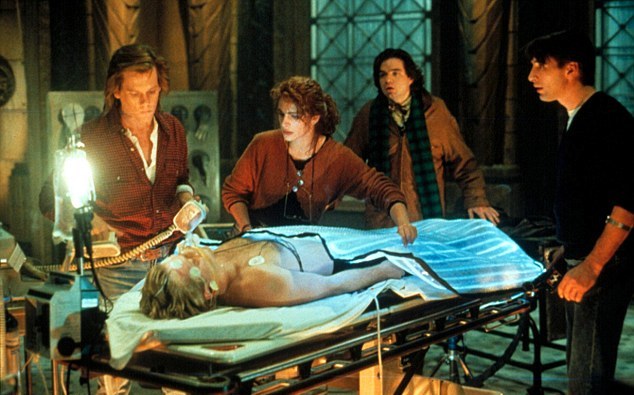 The cast was chock full of rising stars such as Kiefer Sutherland, Julia Roberts, Kevin Bacon, Oliver Platt and William Baldwin, prompting The Washington Post to describe Flatliners as “a Brat Pack neo-Gothic that plays like Frankenstein in reverse.”

Art directed within an inch of its life by Schumacher, it won an Academy award for effects and sound, and was ultimately a commercial success (with that cast how could it not be?) This may or may not have contributed to this next bit of back-from-the-dead news.

Sony Pictures is remaking Flatliners, and they’ve dug up Kiefer Sutherland to join in the fun.

Sutherland (24, The Lost Boys), who played the highly unlikable Nelson in the original, has committed to the upcoming reboot, although the deal has not yet been finalized, according to Deadline. 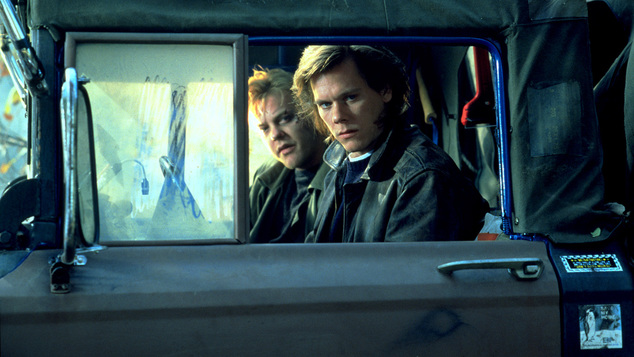 The new Flatliners is being directed by Niels Arden Oplev (The Girl with the Dragon Tattoo – the original Swedish version) but will be written this time around by Ben Ripley. It is being produced by Laurence Mark and Michael Douglas and will go into production in Toronto in the coming days.

The new cast is being described as ‘more inclusive’ and international, featuring Ellen Page (Inception) and Diego Luna (Star Wars Rogue One), although no details were given for their characters quite yet. Nina Dobrev (Vampire Diaries) is portraying Marlo, an overachieving student who is at the top of her class and is possibly a re-visioning of the character originally portrayed by Kevin Bacon. The cast also includes James Norton and Kiersey Clemons. Sutherland is thus far slated to be playing a “seasoned doctor.”

Sony has already announced the release date for Flatliners as August 18, 2017 which this far in advance has already put it up against some serious competition. 20th Century Fox’s Alien: Covenant has an early August of 17 release date as does Warner Bros.’ theatrical remake of CHiPS.

If you don’t remember the original Flatliners or never saw it, check out the trailer. Aside from some fairly cheesy moments, the film still holds up and it kind of makes me wonder what the latest CGI could do for the reboot.

A Flatliners reboot: great idea or better off dead? Post a comment or drop a line to sue@blackgate.com.

Make it clear, I am sick of all this “Buy up, chew up, swallow and regurgitate” Hollow-Wood stuff going on.

Not only is it insulting, having all the favorite childhood memories chewed up and excreted – but we as writers should be opposed to it bitterly.

Why hire a writer, why deal with a creative risk, when you can buy up a tried and true property and exploit it? Even if it sucks, they have ways to bet on diminishing results and make money even if it tanks. (tax subsidies, tricking investors, ticket/contract monopolies so one success pays/priced to float others, etc.)

And, where are we going to get the new “Gremlins, Goonies, Back to the Future” …? All the new stuff that becomes the defining unique product when all they do is chew and spew old stuff?

We really need to start organizing boycotts of this stuff. Try to use our voice as writers to inject into the groupthink that anything re-made is pure worthless trash. That if one has to watch it just wait a year and it’s on Netflix or bargain bin at Hastings, plenty of last year’s stuff there now.

Really, imagine if the re-make market crashes and burns so it’s toxic waste… Guess what – a lot of writers with NEW books will get calls from Hollywood;-)

I saw the original when it came out. I still remember it as pretty good – that opening scene with Kiefer saying ‘This is a good day to die!’ The personal demon haunting him is particularly vivid (I can no longer remember what was bothering the others) and the art direction (again that opening scene, littered with burning braziers) was better than it needed it be. The cameraman had a particular way of shooting Roberts that reminded me of Garbo.
Sorry…rambling. Maybe I need to watch it again? Or will this only spoil my fond memories of it (as with ‘Highlander’)?

Just don’t watch it. I’m not watching any of these remakes and perfectly happy with it.

The only thing worse than a remake is a remake of an origin story.

I’m with Martin on this. If you don’t like it, don’t watch it. The original still exists – it’s not as if the new producers have scoured the globe for every film print, laser disc, VHS, Beta, DVD, blu ray etc etc and consigned them to the bonfire…

Any word on the proposed reboot mash-up between Flatliners and Flashdance? Two great tastes that taste greater together!

To Robert and Martin, I do argue we need to go farther than simply not watching it.

But it doesn’t seem to work that way – the industry is way too entrenched. And they are doing damage. First of all, no need to risk in new stories, no need to hire top writers – any hack can chew up and regurgitate some 80s movie if they don’t have to care if anyone will ever like it – matter of fact if they have guidelines NOT to do anything other than churn out chum and not add to the story. Second it hurts the original – I hate saying “Conan, and I mean the 82 Governator one…” on fav movies. Never had to do that before the 2011 remake.

And, Robert, they actually do hurt the original.

Watership Down for instance. One of my fav cartoons as a kid. Was dark and horrible and wonderful. But, whoop, they re-made it but made it kid friendly – and turned it into excretement. And guess what – depends on the current state of uploads and DMCA notice but it used to be you could see the origianl Watership Down on YouTube for nothing – NOW it’s Hulu only even snippets get DMCA’d off – and the 22 episode animated is so sucky that they let it be on YouTube for FREE, it’s worth so little. I’ve noticed a lot of that, the original suddenly is buy it full price only, the new one to bargain rental, highly tolerated torrents.

I argue we need to start working on boycotts of this Chew and Spew because it isn’t slowing down. A few major klonks would slow it down.

Really, wouldn’t you like to see high $ movie money on NEW properties, perhaps one of your books here? Would you like to write for films new stories, perhaps your stories or ones of fellow writers – or would you like nothing but re-hash and if you get to write it you’ll likely not even want your real name in credits…?

I missed “Flatliners” back in the day, but I’d heard a lot of good things about it so I rented it a few years ago. I was pleasantly surprised! And a little creeped out– which was the whole point.

Re; the “art” aspect, I remember thinking that whatever college they are at has the absolute BEST Halloween parties.

Although I don’t know if anyone can make anything look as cool as “Spectre” made Day of the Dead in Mexico City.

So I can get behind a remake, just to see how they’ll do. But honestly, I think this movie is one that the remake won’t really add anything much to it. The original didn’t really rely on special effects so they won’t really get a boost there (and they could over-effect it to the remakes detriment).