The Digest Enthusiast is fast becoming one of my favorite magazines.

Yeah, maybe that’s because I’m an obsessive collector of digest magazines, so finding a publication devoted to my special interests makes me feel all tingly. But seriously, this magazine is a fun read, cover to cover.

Take for example Steve Carper’s excellent article on The Galaxy Science Fiction Novels, 31 SF novels published in magazine format between 1950-1958 and edited by Galaxy‘s legendary editor H.L. Gold. I bought a story from Steve Carper, “Pity the Poor Dybukk,” which appeared in Black Gate 2, and it’s great to be reading him again. In less skilled hands this article might be nothing more than a dry recitation of facts and publishing dates (not that I wouldn’t find that thrilling, mind you), but Steve greatly livens up the proceedings with fascinating and highly informed commentary on the novels Gold chose, and the often surprising history behind them. Here’s a taste. 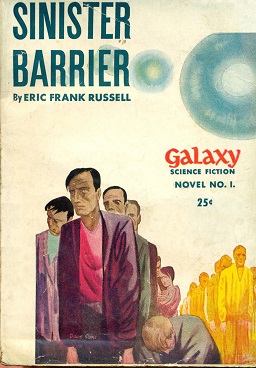 If the beginning had been inauspicious and fumbled, at least Sinister Barrier had contemporary pizazz. The next book was a saga of super-science, of brave Earthmen fighting hideous aliens with a weapon that can (and does) destroy the moon, a nostalgic exercise in Gosh-wow science fiction of the sort that Galaxy had pledged to obliterate from the field. Jack Williamson’s The Legion of Space first saw print as a six-part serial in Astounding in 1934… Gold wanted adults to buy Galaxy; tricking adults into buying The Legion of Space took effort…

The inside front cover of Legion of Space promised Hal Clement’s Needle, a 1949 Astounding serial, for the next selection. It went to mainstream giant Doubleday instead. Worse, in Gold’s eyes, was that Street & Smith, Astounding‘s publisher, had a new policy of purchasing the reprint (second serial) rights for novels they serialized, and was reluctant to let them go for the flat $500 fee Gold offered. That added to a series of grievances Gold had against Astounding‘s editor John W. Campbell and led to a bitter feud lasting as long as Gold remained Galaxy‘s editor.

Gold hurriedly filled the slot with the existential opposite of super-science, an original novel set in a recognizable future. It had everything — a rising young star as its author, cutting edge contemporary subject matter, a realistic style that eschewed Gosh-wow, an astronomical cover that for once indicated the lure of the contents, the first true edition of the first novel ever published by a name destined to achieve world renown. Arthur C. Clarke’s Prelude to Space fell into Gold’s lap for the least likely possible reason: everybody else in the field had rejected it.

Steve’s article was probably the highlight of the issue for me. But I also greatly enjoyed Gary Lovisi piece on the Galaxy Magabooks, Tom Brinkmann’s lengthy article on Fate & Spaceway magazines, and especially Ricard Krauss’ excellent roundtable interview with nearly half a dozen editors of some of the best digital magazines out there, including Jennifer Landels at Pulp Literature (which Fletcher reviewed for us here), and Sheri White from Morpheus Tales.

“A Rat Must Chew” by Gary Lovisi
“The Hideout” by Ron Fortier
“Strangers in Need” by Joe Wehrle, Jr.
“Wounded Wizard” by John Kuharik

We last covered The Digest Enthusiast with issue #2.

The Digest Enthusiast is edited by Arkay Olgar and published twice a year by Larque Press. Issue #4 is cover-dated June 2016. It is 151 pages, priced at $8.99 in trade paperback and $2.99 for the digital edition. This issue’s cover is by RK, based on a photo by Martina Perhat. See complete details here.

Just take my money, John…just go ahead and take it, dammit!

Believe it or not, I don’t have anything to do with The Digest Enthusiast. But I’m sure they’ll be happy to take your money!