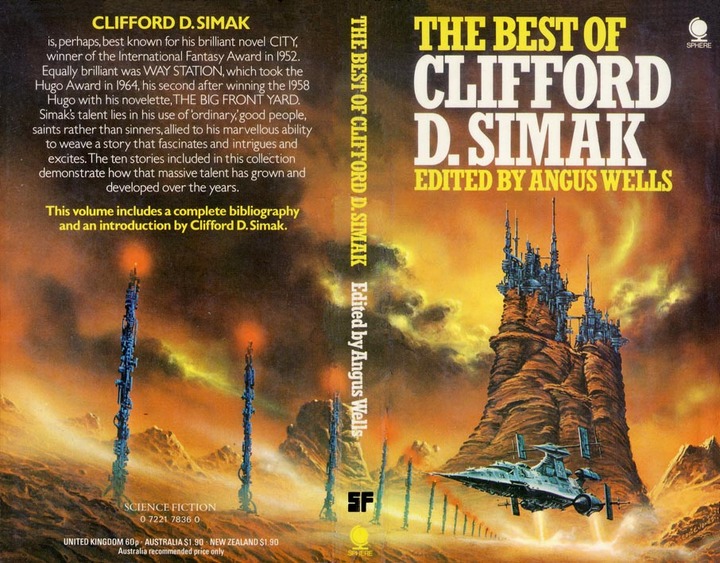 Clifford D. Simak has been experiencing something of a renaissance recently, thanks chiefly to David W. Wixon, editor of the six-volume Complete Short Fiction of Clifford D. Simak from Open Road Media. That’s a delightful series, and it makes Simak’s previous collections largely superfluous. But nonetheless, I still find myself compelled to track down the last few missing titles to complete my Simak collection.

Right now, the most elusive is The Best of Clifford D. Simak, edited by Angus Wells. It was published in paperback by Sphere in 1975 with a knockout wraparound cover by Eddie Jones.

Simak had two Best Of collections in the US, Best Science Fiction Stories of Clifford D. Simak (Paperback Library, 1972) and Skirmish: The Great Short Fiction of Clifford D. Simak (Berkley, 1978). Those contain the classic tales you’d generally expect, including “Huddling Place,” “The Ghost of a Model T,” “All the Traps of Earth,” “Skirmish,” and his masterpiece “The Big Front Yard.”

Angus Wells’ The Best of Clifford D. Simak is a different beast. It skips all the stories I mentioned above, and contains instead an eclectic mix of stories, including a handful of his early pulp tales and two Hugo nominees, “The Thing in the Stone” and “The Autumn Land.” Needless to say, it’s highly prized among Simak collections — yours truly included. 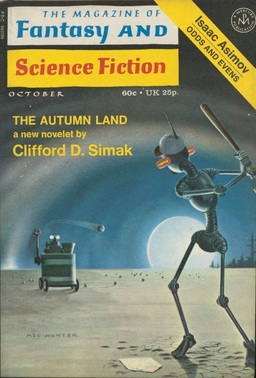 If you’re interested in British editions of Simak, there’s a marvelous page — packed with plenty of high-res scans — at Bear Alley.

The Best of Clifford D. Simak was published in hardcover by Sidgwick & Jackson in June 1975, and reprinted in paperback by Sphere in October that same year. It is 253 pages, priced at £0.60 in paperback. The beautiful wraparound cover was by Eddie Jones.

To my shame I have never read Simak, yet that is. Conversely I have read Angus Wells’ Wrath of ashtar/Usurper/Way Beneath series.

Think I will keep an eye out for this one.

Yep, take an SR-71 Blackbird body, “throw stuff” all over it, and you have a bona fide, 1970s badd-azz spaceship… I immediately envision David Carradine, in a “Deathrace 2000-esque piloting role 🙂

Glad I’m not the only one!

I’ll admit Simak isn’t a big favorite of mine, but he has written some very good short fiction. The collection I have is Skirmish – The Great Short Fiction of Clofford D. Simak. Contents are Huddling Place, Desertion, Skirmish, Good Night, Mr. James, The Sitters, The Big Front Yard, All the Traps of Earth, The Thing in the Stone, The Autumn Land. and The Ghost of A Model T. A pretty darn good set of stories.