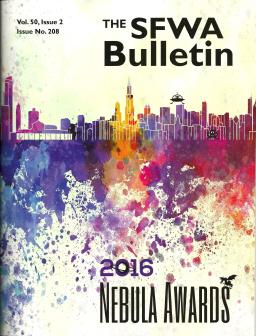 When I arrived at the Nebula Awards conference on Thursday, one of the first things I received was a complimentary copy of issue #208 of the flagship publication of the Science Fiction and Fantasy Writers of America, The SFWA Bulletin. It’s an oversize magazine (not a digest), an impressive 84 pages on heavy stock, which I read on my long train ride back to St. Charles later that night.

The SFWA Bulletin has changed a lot over the years, and I’ve enjoyed plenty of issues. But this is certainly the best single issue of the magazine I’ve ever read. It is devoted almost exclusively to the 2016 Nebula Award nominees, with a 50-page section that examines each and every nominee in detail — with mini-author bios, a story synopsis, a few paragraphs on the origin and story-behind-the-story from the nominees, and fascinating tidbits on each tale, such as favorite reactions from fans, thoughts on possible sequels, and lots more.

This also happens to be Neil Clarke’s first issue as full-time editor of the Bulletin (he’s been acting as interim editor since John Klima’s departure last year). While he’s done a stellar job, it’s clear he’s not 100% satisfied. In his editorial, he wonders whether readers might not be better served with a post-Nebula issue instead.

As we worked on this issue, it became clear to me that our current schedule might not be serving us well. Are we better off with a Nebula issue or a post-Nebula issue?… For starters, this issue includes half of the Nebula story. We can spotlight the nominees and their work, but we can’t show you the wonderful group photos we take at the ceremony, highlight the acceptance speeches, or reflect on the words of our ceremony’s host or get the reaction to the event. The majority of members don’t make it to the event and I’d love to be able to make this issue feel like they had a ringside seat to the ceremony and all the amazing panels that take place.

There’s a lot of truth to that. But at the same time, I’m working on my own Nebula weekend report, with plenty of photos and panel reports, and I’m far from the only one. Detailed event coverage in print is always cherished, but between blogs and social media, events of this importance are pretty decently covered already.

But something like what the Bulletin did this issue, genuine and affectionate journalism on the nominees and their work, is far more rare. I’d enjoy a post-Nebula issue of the Bulletin, but if it means giving up pre-Nebula issues like this, I vote no.

Of course, I’m not a member of SFWA (my tenure as editor of Black Gate doesn’t make me eligible), so my opinion is probably irrelevant.

In addition to all the Nebula content, I also enjoyed Cat Rambo’s From the President column, which included this line:

Things are going well for SFWA, and the “X Days Since a Major Controversy” sign is actually getting a little dusty.

Yeah, that made me laugh. But given how badly SWFA has been roiled by controversy over the past few years, it also counts as a pretty significant accomplishment. So kudos to the current leadership team.

The SFWA Bulletin has been published since the late 60s (I tried to find out what year it started, and failed utterly. If anyone knows for sure, drop me a note.) We’ve covered its history several times here at Black Gate, perhaps most notably in the late Bud Webster’s wonderful column on collecting early issues, Holding History, from June 2011. Here’s Bud:

Three weeks ago as I write this, I was lucky to have won a small lot of magazines that popped up on my radar because of the authors included therein. I was up against another collector, and although the bidding was spirited in the last day or so I walked away with the prize. And what was it, I hear you ask?

It was a dozen issues of The Bulletin of the Science Fiction Writers of America dating from 1967, the earliest being #10. After I paid for them – with shipping, a little over a dollar each – the seller found another issue dated 1970 and threw it in.

A few days later the package came, and I slit the tape carefully to open it. They don’t look like much: just 8.5×11″ pages folded in half and stapled to make a booklet. The pages are browned; the few photos are black and white. All in all, pretty unimposing, really.

We last covered The SFWA Bulletin with Issue 203. Our complete coverage includes:

The SFWA Bulletin is edited by Neil Clarke, and published four times a year by the Science Fiction Writers of America. Issues are around 80-100 pages. This issue has no price, but individual copies can be ordered at the SFWA website for $10 + $3 US shipping, or $4.50 for digital copies. Annual subscriptions (4 issues) are $32. Learn more and order individual issues here.

This issue’s cover is by Paul Rommer.