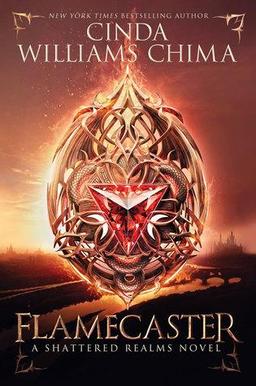 Cinda Williams Chima is the author of two previous series that made her a New York Times bestselling writer: Heir Chronicles and Seven Realms. Her latest novel, Flamecaster, the opening volume in the four-volume Shattered Realms series, returns to the world of Seven Realms to tell the tale of the next generation.

Flamecaster introduces Ash, a trained healer with a powerful magical gift, and Jenna, an independent girl abandoned at birth who finds herself hunted by the King’s Guard because of a strange magemark on the back of her neck. Shattered Realms stands alone, and doesn’t require knowledge of the previous volumes to fully enjoy.

Adrian sul’Han, known as Ash, is a powerful healer with a gift of magic – and a thirst for revenge. The son of the queen of the Fells, Ash is forced into hiding after a series of murders throws the queendom into chaos. Now Ash is closer than he’s ever been to killing the man responsible, the cruel king of Arden. As a healer, can he use his powers not to save a life but to take it?

Jenna Bandelow lives a reckless as a spy and saboteur, striking back against the king. She has been warned that the mysterious magemark on the back of her neck would one day make her a target, but she never believed in the curse… until the King’s Guard launches a relentless search for a girl with a mark like hers. Jenna doesn’t know why she’s being hunted. She only knows that she can’t get caught.

In a twist of fate, Ash’s and Jenna’s paths collide in Arden, where chilling threats and dark magic abound. Ultimately, they’ll come to recue each other in ways they cannot yet imagine.