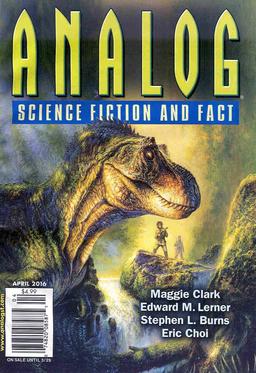 We don’t cover every issue of Analog. To be honest, I have my hands full keeping up with 40-odd fantasy magazines, without trying to cover science fiction as well.

But I’ve been trying to work out a system that allows me to showcase the occasional issue, and I think I’ve finally stumbled on it. We’ll cover every issue that has a dinosaur on the cover. Genius!

This year’s April issue has a bit more gravitas than we typically expect this time of year, with mysteries galore. Our lead story is one such: a corpse and an unusual religious practice might be the keys to a larger mystery than anyone is expecting in “Seven Ways of Looking at the Sun-Worshippers of Yul-Katan” by Maggie Clark. Then dubious deeds are afoot at a radio show, in Edward M. Lerner’s “Soap Opera,” and we have Steven L. Burns’ story of one cop’s fight against his own limitations — and a society rotten beneath the surface — in “Playthings.”

Our fact article is a bit outside the norm as well, with Mark C. Childs’ look at “Composing Speculative Cities.” Then we have our shorter pieces, such as “Alloprene” by Stephen R. Wilk; “Early Warning” by Martin L. Shoemaker; “Sleep Factory” by Rich Larson; “Most Valuable Player” by Eric Choi; and “Diamond Jim and the Dinosaurs” by Rosemary Claire Smith.

Guest Editorial: Our Right, Our Duty, Our Privilage by Michael F. Flynn
In Times to Come
Biolog: Maggie Clark by Richard A. Lovett
The Alternate View by Edward M. Lerner
The Reference Library by Don Sakers
Brass Tacks
Upcoming Events by Anthony Lewis

The April issue is on sale until March 29th. The awesome cover is by Bob Eggleton.

We last covered Analog with the January/February 2016 issue.

Our Mid-March Fantasy Magazine Rack is here. See all of our recent fantasy magazine coverage here.