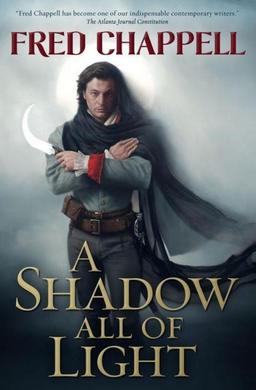 Fred Chappell won a World Fantasy Award for his short story “The Lodger” (1993). He’s also the author of the classic horror novel Dagon (1968) and I Am One of You Forever (1985), and was the subject of a deluxe Masters of the Weird Tale volume from Centipede Press last December.

His latest is an epic adventure featuring pirates, master thieves, monsters, and fantasy detectives. It arrives in hardcover from Tor next month.

Fred Chappell’s A Shadow All of Light, a stylish, episodic fantasy novel, follows the exploits of Falco, a young man from the country, who arrives in the port city of Tardocco with the ambition of becoming an apprentice to a master shadow thief. Maestro Astolfo, whose mysterious powers of observation would rival those of Sherlock Holmes, sees Falco’s potential and puts him through a grueling series of physical lessons and intellectual tests.

Falco’s adventures coalesce into one overarching story of con men, monsters, ingenious detection, cats, and pirates. A wry humor leavens this fantastical concoction, and the style is as rich and textured as one would hope for from Chappell, a distinguished poet as well as a World Fantasy Award-winning fantasy writer.

They’re not kidding about the “distinguished poet” bit. Have you seen this guy’s bio? Whoa.