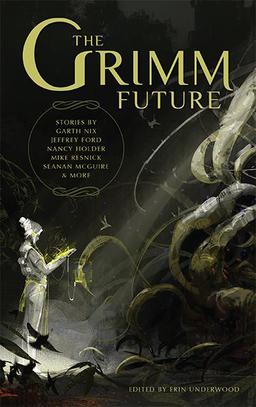 NESFA Press is one of my favorite small publishers. They’ve done some of the most essential collections of the past few decades, including From These Ashes: The Complete Short SF of Fredric Brown, the massive six-volume Collected Stories of Roger Zelazny, the two-volume Complete Science Fiction of William Tenn, the magnificent Major Ingredients: The Selected Short Stories of Eric Frank Russell, Transfinite: The Essential A. E. Van Vogt, and dozens more. They’ve been relatively quiet recently (except for releasing a new volume in The Collected Short Works of Poul Anderson every year or so, which admittedly is enough to keep anyone busy), and I admit that I was growing concerned that the once tireless NESFA machine was perhaps not as tireless as most of us thought.

Blending fresh new science fiction with a futuristic dash of magic, The Grimm Future is a unique anthology of reimagined Grimm fairy tales from some of today’s most exciting authors — along with the original stories that inspired them. The Grimm Future examines our humanity and what that term might come to mean through the eyes of future generations as society advances into an age when technology consumes nearly every aspect of our lives or has ultimately changed life as we know it. How might these timeless stories evolve? Given the relentless onrush of technology, there is even greater need for fairy tales and Grimm magic in our future. Read on!

All the stories are new.

The Grimm Future was released in hardcover at Boskone 53 in February. The cover art is by Richard Anderson, who also did the marvelous cover for A.M. Dellamonica’s story “The Glass Galago” at Tor.com. Click the image at right for a bigger version.

Here’s a peek at the complete dust jacket:

On the Other Hand–Amen: The Collected Stories of Roger Zelazny. Volume One: Threshold; Volume Two: Power and Light by James Enge
The Good, the Brown, and the Kornbluth by James Enge

The Grimm Future was published by NESFA Press on February 19, 2016. It is 272 pages, priced at $35 in hardcover. There is no digital edition. The cover is by Richard Anderson. See more details at the Boskone blog here.

See all of our recent coverage of the best in new fantasy here.

It is a very handsome book, I can tell you 🙂