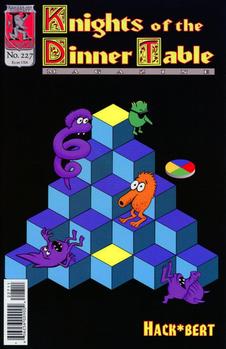 Knights of the Dinner Table follows the misadventures of a group of misfit gamers from Muncie, Indiana. It is written and drawn by my friend Jolly R. Blackburn, with editorial assistance by his talented wife Barbara. Black Gate readers may remember the KoDT spin-off The Java Joint, which appeared in the back of every issue of BG (and was eventually collected in a single volume in 2012).

KoDT started off in the back of the gaming magazine Shadis, and in short order it became one of the most popular comics in the industry, appearing as a regular feature in Dragon, Kevin Siembieda’s Rifter magazine, and other places. Since 1996 it has appeared as a standalone magazine; it has been published by Kenzer & Company since the fourth issue.

KoDT magazine is published monthly. The core of the publication is the comic strip, but the issues are huge — 64 pages — and rounded out with news, reviews, features, and a variety of entertaining gaming columns. It is, hands down, the best way to stay informed on the adventure gaming hobby each month.

The cover of KoDT 227 is a special treat for old-school video game players. Here’s Jolly:

We’re very excited about this month’s cover — not only is it a parody of the classic 80’s arcade game, Q*bert but it was drawn by Jeff Lee — one of the original co-designers of the game and the man who did the original Q*bert game graphics

Cries from the Attic: Editorial of a Madman: Dispel Confusion by Jolly Blackburn
Table Talk: Our Readers Talk Back
Weird Pete’s Bulletin Board
Back Room at the Games Pit
Parting Shots

We last covered Knights of the Dinner Table Magazine with issue #224.

Jolly and his team have a tradition of really creative covers. Stay tuned – I hope to showcase a few more upcoming issues, mostly because I love the covers!