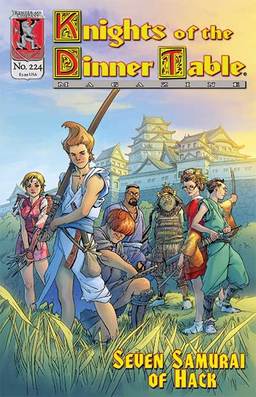 Knights of the Dinner Table follows the misadventures of a group of misfit gamers from Muncie, Indiana. It is written and drawn by my friend Jolly R. Blackburn, with editorial assistance by his talented wife Barbara. Black Gate readers may remember the KoDT spin-off The Java Joint, which appeared in the back of every issue of BG (and was eventually collected in a single volume in 2012).

KoDT magazine is published monthly. The core of the publication is the comic strip, but the issues are huge — 64 pages — and rounded out with news, reviews, features, and a variety of entertaining gaming columns. It is, hands down, the best way to stay informed on the adventure gaming hobby each month.

I bought the first issue back in 1994, and contributed a book review column for several years in the late 90s. It amazes me to see that, with 224 issues under his belt, Jolly is now closing in on Dave Sim’s legendary 300-issue run with Cerebus. That’s a monumental accomplishment.

KoDT 224 contains no less than nine full-length strips, plus some short “One-Two Punches.” The cover is by Steven Cummings, a smart parody of Seven Samurai.

Bandit Tower — A solo adventure in the spirit of Hackmaster, by Mark Dowson
Rustlers of the Night — An alcohol steeped slushy ‘ooze’ that packs a punch, by Steve Johansson & John McConnell

Web Scryer: Revisiting the Apocalypse by Ken Newquist
Tales from the Table

Cries from the Attic: Editorial of a Madman: Chasin’ the Catch-Up Caboose by Jolly Blackburn
Table Talk: Our Readers Talk Back
Weird Pete’s Bulletin Board
Back Room at the Games Pit
Parting Shots

We last covered Knights of the Dinner Table Magazine with issue #220.