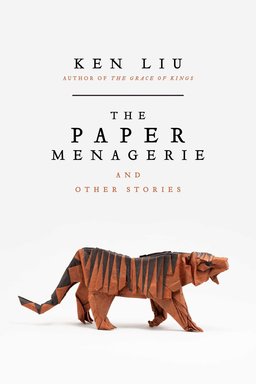 Ken Liu has been one of the breakout fantasy stars this decade. His first novel, The Grace of Kings, was nominated for a Nebula Award last week, and Amal El-Mohtar called it “a magnificent fantasy epic.” As a translator he’s brought some of the most important Chinese-language SF to America, including last year’s Hugo winner, The Three Body Problem, by Cixin Liu.

But much of Ken Liu’s reputation was built on a stellar series of short stories published in places like Clarkesworld, F&SF, Asimov’s, Analog, Strange Horizons, and Lightspeed. He’s received virtually every award our field has to offer for his short fiction, including the Nebula, Hugo, and World Fantasy Awards — and he was the first person ever to win all three awards for a single story, “The Paper Menagerie,” originally published in the March-April 2011 issue of The Magazine of Fantasy & Science Fiction (read the complete story at io9).

The Paper Menagerie and Other Stories also includes a brand-new story exclusive to this volume, “An Advanced Reader’s Picture Book of Comparative Cognition.”

Ken Liu has quickly become one of the most original and thought-provoking story writers of his generation. Deftly riffing off the power of narrative, this collection is as heartbreaking as it is charming.

In “Simulacrum,” the daughter of the revered inventor of augmented reality is irrevocably divided from her father by the technology that is meant to help her be closer to him. In the title story, “The Paper Menagerie,” a child loses touch with the magical paper menagerie built for him by his mother, a mail-order bride in suburban Connecticut, but then discovers as an adult that love knows no bounds. A young man struggling to preserve his culture in the face of utter annihilation finds peace in the transcendence of fleeting memory in “Mono No Aware.” As a couple explores one of the hidden atrocities of the Second World War, they try to speak for those who no longer can in “The Man Who Ended History.” And in “An Advanced Reader’s Picture Book of Comparative Cognition,” a mother and father who are separated by vast distances must invoke, for their children, a thousand ways love may take form

These fifteen evocative short stories and novellas tour the poignant history that always haunts immigrants, survivors of war and our consistent technological advances as they are explored through love, race, and politics. An award-winning author, Liu and his stories invoke the magical within the mundane in profound and moving ways.

You can read more about the book at Ken’s website. Andrew Liptak at Barnes & Noble has a great interview with Ken and his editor Joe Monti about the book here.

The Paper Menagerie and Other Stories will be published by Saga Press on March 8, 2016. It is 464 pages, priced at $24.99 in hardcover and $7.99 for the digital version. That origami tiger on the cover was designed, folded and photographed by Quentin Trollip, who I bet is a ton of fun at birthday parties.

What, no “Knotting Grass, Holding Ring?” I was so impressed by that one, with its unconventional view of revolutionary heroism, that I keep checking out Liu’s stories despite not really finding another I like. This volume I need to read.

Strange to think he’s already published so many short stories they won’t all fit in a 460+ page collection!

Where did “Knotting Grass, Holding Ring?” appear? You’ve made me curious to read it.