I was already a fan of Bud Webster’s Past Masters column, thoughtful biographical pieces on the enduring impact of our finest writers, when I first approached him to become a Contributing Editor. His first article for us, a marvelous discussion of Tom Reamy, and a continuation of his Who? series on neglected genre authors, appeared in Black Gate 15.

Bud didn’t waste my time with a superficial survey of Reamy’s fiction — anyone could have done that. Instead, he delivered an impeccably researched, 3,400-word piece that dove into Reamy’s history and early influences. It was the kind of piece that triggered an outpouring of discussion and gratitude from BG‘s readers (Keith West even drove to Breckenridge, Texas so he could send Bud a photo of the empty lot where Reamy’s house once stood).

It was the beginning of a long and fruitful partnership with Bud. He was briefly our poetry editor, before the death of the print magazine made that title superfluous. He became a prolific early blogger for us, contributing a dozen posts, mostly on his favorite subjects — the pros and cons of selling vintage books, his role as an stfnal historian, and the magical books that first lured him into the hobby.

Bud wrote extensively on the hobby he loved so much. His first book was Anthopology 101 (2010), an affectionate look back at the classic SF anthologies that helped define the genre. It was quickly followed by The Joy of Booking (2011) and Past Masters, & Other Bookish Natterings (2013). All three were collections of his earlier columns.

In 2007, SFWA made Bud their Estates Liaison, in charge of their ongoing project to make it easier for publishers to track down the agents for dead SF and fantasy writers. He was a tireless spokesman for the project, and in fact did such a marvelous job that he was given the Service to SFWA Award at the Nebula Awards banquet in 2012. 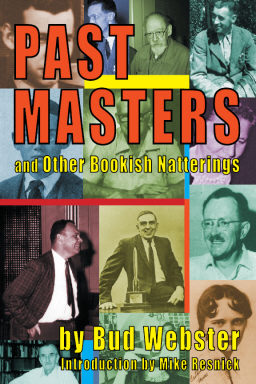 Bud was always throwing out possible ideas for new columns. My last e-mail from him, dated January 16, 2015, read as follows:

Getting ready for a more-or-less local convention the past week, and was going through my book stock to both add and cull. I had long since pulled titles by James P. Hogan (because he was a Holocaust denier), and was considering doing the same for the MZBradley books.

So, where do I get off refusing to sell these books, huh? Ain’t there a First Amendment or something like that?

I then recalled a convention more than 40 years ago where I had offered a stack of John Norman’s Gor books for auction, and one of the heaviest bidders was a group of feminist fans who planned, if they won, to burn the books publicly. They didn’t, but I had very mixed feelings — on one side of the coin, my job is to sell the things, not censor them or worry about what happens to them after money changes hands; on the other side, the idea of my providing book-burners (literal) fuel was and is abhorrent.

So, would this make a good blog entry for BG? Let me know what you think.

Of course, I loved the idea.

Alas, it was not to be. Bud’s health quickly worsened; by April, he was sending out updates from his oncologist. There were ups and downs, victories and setbacks… but through it all, a gradual decline. Earlier this year, on his Facebook Fan Page, Bud quietly announced that he was entering hospice care.

Bud was born in Roanoke, Virginia, in 1952. He graduated from Hermitage High School in Richmond, Virginia in 1970, and studied music at Virginia Commonwealth University, majoring in composition. His first published short story was “The Rabbi’s Tale” in Drums Around the Fire (White Wolf, 1993); his most popular series were the four Bubba Pritchert stories that appeared in Analog, starting with “Bubba Pritchert and the Space Aliens” (July, 1994) 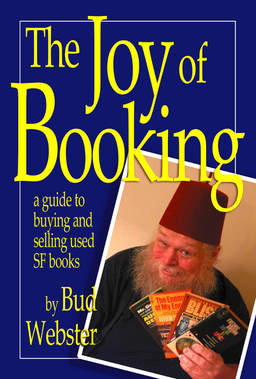 Bud’s columns for Black Gate include:

What I Do and Why I Do It
When I was Jung
What I Do It With
Spreading the Word (or, “Book ’em, Bud-O”)
The Joy of Booking
Estate Your Business, Please
Holding History
A Galaxy of Stars
It’s Not NPR’s Fault (No, Really)
So, What the Hell Am I, Anyway?
Talk to Any Squids Lately? In Space, I Mean?
Selling Your Books Ain’t as Easy as it Looks

Bud passed away earlier this morning. He is survived by his wife Mary Horton. He was 63 years old.

Bud was an inspiration to me, and a very enjoyable writer. He even had the taste to marry a woman with the same name (minus the Ann!) as my wife. (Of course, my wife got the Horton only after marrying me!)

I haven’t read any of his fiction. But in his non-fiction, Bud impressed me as perhaps the purest fan I ever met, with his almost boundless love and clear-eyed appreciation of our genre. I miss him terribly.

Bud’s service as a literary estates liaison impressed me immensely. His description of what can happen to your life’s work if you have no literary executor or press that job on someone not suited to it was sobering. His description of the strains it can put on family members who are not cut out for the job to try doing it anyway was more so.

My descendants unto the de-Disneyfication of copyright expiration will have Bud Webster to thank for my books being in the hands of people who know what to do with them.

[…] had a long association with Black Gate, recounted by John ONeill in a tribute at the […]

Just read the obit at File 770. My favorite detail:

As a poet, Webster’s most famous work was the narrative SF hobo poem, “The Ballad of Kansas McGriff,” which took first place in the National Hobo Association Rendezvous 2000 Poetry Contest, where he read it to an audience of over 5,000 hobos.

I missed that! Thank you for sharing it. I never knew that about Bud, but it fits the story of his life marvelously.

I spent the morning following the above links and reading Bud’s blogs. Man, they’re fun to read — what a great voice!

I’d especially recommend “The Joy of Booking” to anybody who has a few minutes to spare. In the Gutenberg Bible passage, he really tapped into something elemental.

> I spent the morning following the above links and reading Bud’s blogs.

I think Bud would have been very touched by that, Nick. What better way is there to pay tribute to a fine writer?