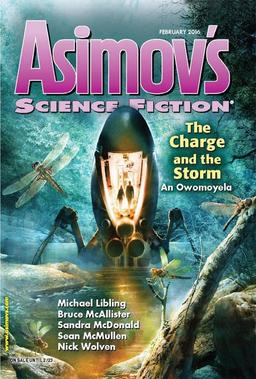 In her editorial in the latest issue of Asimov’s Science Fiction, Sheila Williams explains why SF often gets a bad rap for predicting the future.

As I write this, I am awash in the flood of published reminisces about Back to the Future Part II’s journey into the future…. Most of these ruminations seem to be rather disappointed with the real 2015… They claim that these special effects from a late eighties flight of fantasy were somehow promised to all of us, but the future didn’t deliver.

I’ve seen these sort of complaints levied at science fiction on numerous occasions. Robots don’t have positronic brains, dilithium crystals are not a thing, and settlements on the Moon and Mars remain a distant dream. Yet anyone who’s at all conversant with SF soon realizes that most science fiction is descriptive rather than predictive…

For all his forward thinking, Isaac was as much a product of his time as any writer. Although he eventually became an outspoken advocate for women’s rights, his early fiction described a society that wasn’t very different from his own… While I’d love to have an FTL drive that would take me to Terminus and Trantor, I don’t want the future to look like the world of 1951, and I don’t expect it to look like 2016. I don’t fault the young man who created that society unaware of the actual changes in mores and social structure that lay ahead anymore than I’d fault today’s writers for not getting their future facts straight.

I’m glad that our prospects are still unknown. I wouldn’t mind a jetpack, but I’m happy that so far we aren’t standing on Nevil Shute’s beach waiting for death from nuclear fallout or from Racoona Sheldon’s screwfly solution.

The first interview I ever did, as a young internet blogger for SF Site in 1997, was a phone interview with the late writer and editor Algis Budrys. He argued the exact same thing. “Why should SF predict anything?… SF is for speculating, not predicting,” he told me. I debated the point at the time, but over the years I’ve come to see that he — and Sheila — are right.

The February issue of Asimov’s Science Fiction contains two novelettes from An Owomoyela and Nick Wolven, plus five short stories, all wrapped up an eye-catching cover by Alejandro Colucci. Here’s the description from the website:

An Owomoyela’s blockbuster tale about “The Charge and the Storm” anchors our February 2016 issue. In an effort to survive among aliens in an inhospitable environment, most people have compromised much of their humanity. Now comes the inevitable conflict with those who continue to cherish individual human value. You won’t want to miss this tense and provocative story.

February is an issue of firsts. Esteemed author Michael Libling makes his first appearance in our pages with a bittersweet portrait of “The Grocer’s Wife”; fellow esteemed author Sean McMullen’s first tale for us is a chilling examination of some “Exceptional Forces”; while new author Sarah Gallien makes her professional debut with the unsettling story of “In Equity.” Bruce McAllister returns to Asimov’s with a heart-breaking attempt at “Bringing them Back”; Sandra McDonald absconds to the Everglades to investigate “The Monster of 1928”; and Nick Wolven invents novel obstacles for teens coming of age during “Passion Summer.”

Long ago on a New York City subway platform, Robert Silverberg had an odd vision of Famous Fantastic Mysteries. In Reflections, he ponders the significance of that encounter; novels by Paolo Bacigalupi, Cecilia Holland, Naomi Novik, Gene Wolfe, Edward M. Lerner, and Samuel R. Delany will be insightfully reviewed in Peter Heck’s On Books column; plus we’ll have an array of poetry and other features you’re sure to enjoy.

“The Charge and the Storm” by An Owomoyela
Petra was already in a bad mood, not that that said much. Her good moods had become increasingly apocryphal over recent years. But today there was a lightning storm outside her Faraday cage of an office, and she could feel it like a second psyche, inhuman and insentient and laid over her thoughts.

“Exceptional Forces” by Sean McMullen
I knew I would die the night before the conference started. Conferences are where people network, gossip, discuss ideas, draw diagrams on the backs of beer coasters, and exchange gigabytes of data on USB sticks. Conferences are security nightmares, but conferences of scientists push the idea of nightmares to new extremes.

Murmurations by Robert Borski
Bottle Cast upon a Dry Sea by G.O. Clark

The February issue went on sale January 19. It will be on sale until February 23.

We last covered Asimov’s SF here with the January 2016 issue.