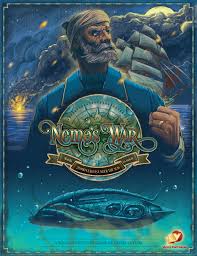 Some years ago I brought the attention of Black Gate regulars to a nifty solitaire board game from Victory Point Games: Nemo’s War. (Here’s a link to my review of the original edition of the game.)

The Kickstarter for the second edition was launched several weeks ago and now only THREE days remain to join the voyage and pledge for a copy of the game yourself. All stretch goals have already been met (and quickly!).

The first version was a grand adventure where players took on the role of the famous Captain Nemo from 20,000 Leagues Under the Sea and explored the seas of Earth while trying to stay clear of imperial powers. Well, actually, there are four separate ways to play the game, and not all of them involve staying clear of those powers… You can play as an explorer, a scientist, an anti-imperialist (voyaging around the world and inciting revolutions to lend support to captive peoples) or as a warrior. What goal you choose results in different ways to tabulate your final scores as the days wind down. For instance, scientist Nemo doesn’t get nearly as many points for blowing up ships as warrior Nemo.

With several options for play and a wide selection of cards to randomize events, there was a lot of variety to be had in the game, and now there is even more, along with a re-designed board, additional options for customizing the ship, improved action selection (so a clever player can manage many more than one action a turn), and more bells and whistles than I can detail.

The 2nd edition board board looks beautiful. I can’t be certain how the game will play, but the rules are available for a preview, here, and it looks like it’s a step up even from the earlier edition. This was one voyage I happily signed on for.