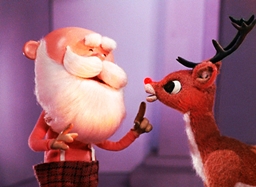 Last year around this time, I posted a short, short story I wrote, “Watson’s Christmas Trick,” which was based on Arthur Conan Doyle’s own “How Watson Learned the Trick.” If you missed that, click on over for a little Holmesian holiday fun. Or click on this post from last year, which looks at a few Holmes pastiches for the season, including one of my all time favorite anthologies, Holmes for the Holidays.

Though I don’t use it too often when I write fiction (maybe I should start writing my own character, instead of Sherlock Holmes, Solar Pons and Nero Wolfe…), I think that my ‘voice’ involves a solid dose of humor. And on that note, I give you “Rudolph’s Performance Review” You’d think the reindeer with the shiny red nose would have knocked his annual review out of the park after that foggy Christmas Eve, eh? Well, that Santa is one tough reviewer. Read on, and I wish you a safe, happy and blessed Merry Christmas.

Santa, facing competition from online retailers and all those megastores, had been forced to make some changes in his labor relations techniques. He didn’t have quite the same kind of monopoly anymore. One of the demands granted (at the insistence of those pesky elves) was an annual review to determine pay increases. Below is the story behind Rudolph’s review the year after he saved Christmas with “his nose so bright.” 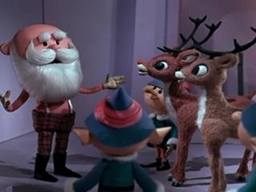 Rudolph sat uncomfortably in his chair on his side of the large desk. It was a padded chair, no better or worse than most chairs. Unfortunately, it was built for humans (and elves), not for four-legged reindeer. But when the big man told you to “have a seat,” that’s exactly what you did.

The ‘big man’ was, of course, Santa Claus. The jolly man was seated across from him, his plump hands resting on his ample belly. When he moved, his stomach rolled like a bowl of jam. No, that wasn’t quite right. What was the word he was looking for? Well, it didn’t really matter. Santa looked very business-like in a crisp tie and suit jacket. The red suit was only worn on “THE DAY.” On normal workdays he could be seen on the grounds of North Pole Enterprises, dressed like any other CEO of a global business.

However, Rudolph was confident that his Strategic Planning and Performance Review would be a good one this year. Hadn’t he stepped in at the last minute and averted near disaster? He’d shown leadership and execution. Of course, it was poor contingency planning by Santa himself that had led to the problem, but he didn’t see any advantage in bringing that up. No, he’d just stand by his own record and bask in the rewards.

“Rudolph, glad you could make it. You know how I look forward to these chats,” Santa said with an expansive smile. He then shuffled a few papers in front of him and looked gravely at them. “Quite a year we had, eh? Well, let’s get down to business.”

“There are a few key indicators, as you know, that I use to evaluate all of my employees.” He raised one sheet from the rest and held it before him.

Rudolph was caught off guard. He hadn’t expected any problem in this area. He had replaced Dancer on Christmas Eve as head of the distribution team. Without him, deliveries would have failed the world over. What was the problem? 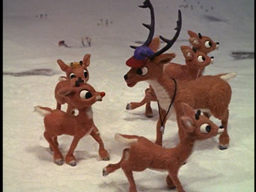 “Most of your staff said that you didn’t interact with them enough and that you skipped recreational activities.” Here, he looked at Rudolph over the edge of the paper, with a slight frown.

The reindeer searched for words. “But, but, Santa, they wouldn’t let me play in any of their reindeer games,” Rudolph sputtered. He was in danger of losing his composure already.

“Son, you have to be a leader if you’re going to guide my sleigh at night. You can’t wait for them to invite you in, like you’re some kind of intern. You’ve got to be proactive. I’m afraid you’re getting a negative there.”

Oh no, thought Rudolph. What was happening? How could Santa be criticizing him because the other reindeers had always ostracized him because of his red nose? I mean, it’s not like Santa’s red nose, which was caused by drinking too much wine all year. Rudolph had been born with his. Abruptly, he realized Santa was talking.

“Let’s move on to your Presents Distributed measure. I see that you reached your goal of 100 percent. I expected no less of you.” 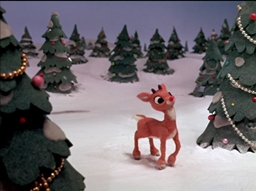 Santa wasn’t exactly smiling, and Rudolph couldn’t tell if he had been complimented for his achievement or not.

“However, I see that you achieved that entirely in the fourth quarter. Now, does that seem like the most efficient method?”

What in the world was Santa talking about?

“Don’t you think we’d be better off spacing out the deliveries over all four quarters, putting less of a burden on production, and reducing the stress on your team? I’m sure we could find ways to decrease costs with a new distribution schedule. For three quarters distribution is zero. I’m afraid that doesn’t meet my expectations.”

Rudolph was sweating now. His head was spinning. What in the world was going on here? He was being penalized because Santa delivered all of his toys on Christmas Eve? The reindeer didn’t have any say at all in that. He needed to say something.

He stood up and started to speak. Before he got the first syllable out, Santa stared at him and said, “You would like to add something?” The words themselves didn’t seem that threatening. But the way he said them indicated that pointing out that the old man himself made the schedule wasn’t going to help matters at all.

Instead, Rudolph said “But you only put me in charge of the team on Christmas Eve, and service distribution was set. Dancer made up these measures, and he was in charge of implementing them up until the night before Christmas.”

Here, Santa smiled a little and put his checklist down. “Now Rudolph,” he said, holding his hands up, palms facing outward. “You are in his position. You’re performing his duties. It certainly wouldn’t be fair to anyone, least of all yourself, to not hold you to the same standards as your predecessor. We’d have an uneven playing field. I think we need to go with the measurements we have in place. We can change them for next year if you feel the need. We’ll just have to put down another negative check mark here.

Rudolph didn’t know what to do. Arguing with Santa never worked, and he was watching the amazing job he’d done blow away like dead leaves in the wind. Santa was already moving on.

“Now, let’s look at preparedness.” Rudolph felt a sinking feeling in his stomach. The way Santa was going, he didn’t have a chance on this one.

“A foggy night nearly cancelled Christmas. Imagine the heartbroken children everywhere. I’d think that Product Distribution would have coordinated with OEM to be prepared for bad weather. I mean, we know the date of delivery each year, right? We have the finest radar system this side of NORAD up here. Emergency Management would have told you about the impending bad weather, allowing you to take proactive action.”

This was like a bad dream. How in the world could he be blamed for this? On Dec 23, he was working in the petting zoo. The bad weather rolled in the afternoon of the 24th, and Santa promoted him that evening. He didn’t even get a practice run with the team. He felt he had to speak.

“Santa, I wasn’t on the team until you hooked me up to the sleigh. How could I have done anything about this?” He noticed his voice was quavering. 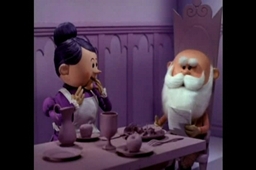 Santa stood up and walked over to the window, his hands clasped behind his back. In a steely but level voice, he said: “You aren’t going to blame Dancer again, are you? I thought we already went over this. You have the fellow’s job. Now you want to besmirch his record and blame your own shortcomings on him? That’s not the mark of a team player.” He turned to face him now.

What would you know about being a team player, thought Rudolph. Have you ever considered dropping a hundred pounds to help out those of us pulling the sleigh? No, you just eat every cookie laid out for you on the trip.

Something must have showed on his face, because Santa said: “Is there something you want to add, son? This is your review, you know.” The tone didn’t imply he really wanted to hear anything.

Rudolph was in a no-win situation. If he sounded off, he might lose his job. And despite this review, it was a good job. “No Santa, I have nothing to add to your analysis.”

The smile returned to the big man’s face. “Very good. Let’s see what we have here.” He went down the list again. “Oh my. It would seem, from the evidence in front of me, your score is a DID NOT MEET.”

Rudolph blanched at this. The last reindeer that had received this score had been demoted to kitchen duties and was never seen again. Every reindeer at the Pole knew about it and feared such an event. 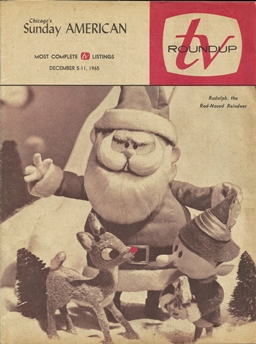 “Well, you did step in at crunch time and deliver.” Santa said. “That certainly should count for something, and it was your first year on the job. I’m sure you’ll improve on things this year. Tell you what.” Here he paused, and Rudolph looked at him expectantly, hoping not to pass out. “We’ll make that MET EXPECTATIONS. How about that”

Rudolph exhaled deeply. There would be no one-way trip to the kitchen. He muttered his thanks to Santa, signed the form, and hobbled out of the office.

After his star reindeer had left, Santa sat at his desk and smiled. That had been a tough one. Without Rudolph, the whole business would have imploded last Christmas. He should have been ready for bad weather. Thank goodness that screwy red nose of Rudolph’s had been around. But you had to stay on top of these employees. Had he received an EXCEEDS EXPECTATIONS, who knows what would have happened the next time there was an emergency?

Staff might have made demands. Good lord, the elves might even attempt to unionize. Wouldn’t that be a mess! No, the old man had deftly handled this situation. Rudolph would work every minute between now and Christmas Eve, and he wouldn’t cause any trouble. Santa loved the Strategic Planning and Performance Management Review system.

“Ho, ho, ho,” he said softly as he arose and headed to the kitchens for a light snack. Had to keep his strength up for the next big sleigh ride.