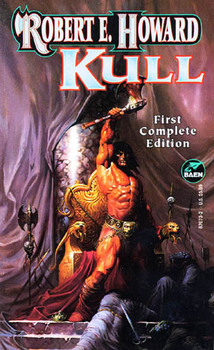 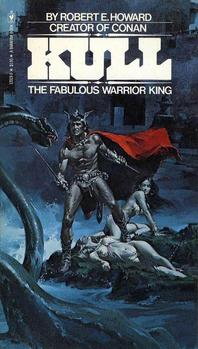 NOTE: The following article was first published on April 18, 2010. Thank you to John O’Neill for agreeing to reprint these early articles, so they are archived at Black Gate which has been my home for over 5 years and 250 articles now. Thank you to Deuce Richardson without whom I never would have found my way. Minor editorial changes have been made in some cases to the original text.

Robert E. Howard’s “The Shadow Kingdom” is a remarkable advancement upon “Exile of Atlantis” and the “Am-ra of the Ta’an” fragments. Howard’s first published story of what will later be known as the Pre-Cataclysmic Age leaves behind the derivative world of Edgar Rice Burroughs pastiches to mine new territory in terms of character and setting as well as genre.

Kull, the barbarian who has recently seized the crown and now must struggle to keep it, marks a significant break from both Howard and the fantasy genre’s past while continuing to build upon the age-old theme of the outsider as noble savage. Howard was hardly the first young man who felt a sense of kinship with such characters. It is not hard to imagine the aspiring young writer, alienated in Cross Plains, pouring his feelings into the exiled Atlantean who remains an outcast even after rising to the throne of Valusia.

The story opens with Kull making a proper royal entrance. Unsurprisingly, the barbarian king’s empathy rests not with Valusia’s finest archers and trumpeters, but with the mercenaries paid to act as foot soldiers – men who show the king little respect, but who demonstrate integrity for all their brash honesty. This sets the stage for the introduction of Brule, the noble Pict destined to become Kull’s loyal companion. While Brule enters the series as a figure of suspicion, Kull soon modifies his opinion of the man’s character. Brule, like Kull, is a man of integrity. 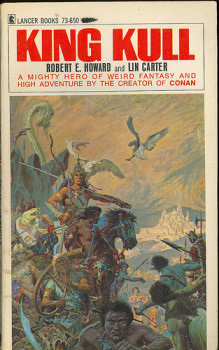 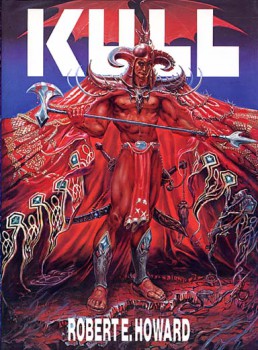 One can easily imagine Howard crafting his story through the eyes of his protagonist starting out with a prejudice against Brule only to have the Pict prove his loyalty. Howard the writer literally becomes Kull the character.

This intense and unique identification between creator and creation is part of what gives Howard’s best work its strength for the author imparts to the reader his genuine surprise at unforeseen developments. Howard’s fictional world was real to its author and this is what separated him from many other pulp writers.

Kull agrees to dine with Ka-nu, the Pictish envoy grown fat and debauched from his soft living over many years in the Valusian capitol. Kull’s initial assessment of Ka-nu, as with Brule, is negative but circumstances again prove Kull (and thereby Howard) to be a rash judge of character for Ka-nu does behave with honor in spite of his seeming corruption.

Tales of court intrigue were common at the time Howard wrote “The Shadow Kingdom.” The adventure stories of Alexandre Dumas, Anthony Hope, and Henry Bedford-Jones were among the staple diet of readers of pulp and adventure fiction. 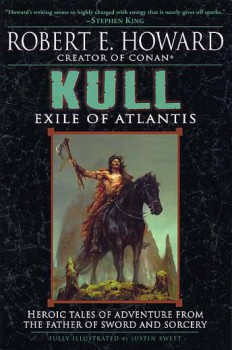 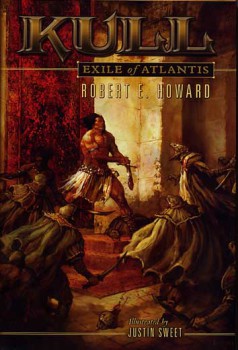 Howard broke with convention once again with this tale by having the duplicitous members of Kull’s court not only be likened to serpents, but actually be unmasked as serpents disguised as men.

This wrinkle in the plot is a familiar one to readers of various Theosophical texts (which still flourish among followers of the more fantastic conspiracy theories) who posit an underground civilization of reptilian humanoids has survived from antiquity or was established as a colony by some far distant planet.

Such material would easily be viewed as ridiculous in the hands of most writers. The difference is that Howard passionately believes in his fiction and consequently, the reader is willing to suspend their disbelief.

“The Shadow Kingdom” still inspires excitement in readers nearly ninety years since its publication. The story concludes with Kull vowing to hunt the Serpent-Men all over the world to destroy them once and for all.

The tale which first introduced Kull to readers of Weird Tales in 1929 was a long time coming for Howard who had taken Kull from supporting player in tribal dramas to a principled exile to an unlikely king along the character’s arduous path to publication. 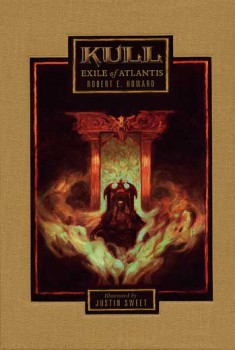 The quest to destroy the Serpent-Men is a conceit that would later inspire L. Sprague de Camp to expand the role of the Stygian sorcerer, Thoth-Amon and the cult of Set into a comparable recurring plot device in his revised and expanded Conan stories of the 1950s, 1960s, and 1970s. That particular version of Howard’s more famous barbarian hero is one that rankles many purists today, but it is a vision de Camp borrowed from Conan’s predecessor and Howard’s original noble savage.

The 1929 publication of “The Shadow Kingdom” ushered in the new era of Kull, exile of Atlantis and his alter-ego, Robert E. Howard, exile of Cross Plains.

I’ve never been convinced that Howard treated his world as more real than other writers. Perhaps he did compared to other writers of the time who have been completely forgotten, but to those who had a lasting impact I don’t see the difference.

Thanks to William and John for posting this entry. Kull is on my to-read list. So I’ll get to it at some point. The “Quest for Identity” part of the title was a bit murky to me. Are you referring to Howard by that?

Hi NOLAbert, the “Quest for Identity” title was a reference to Howard shaping Kull from Am-ra on his path to becoming the first great sword & sorcery hero. If, by extension, Howard underwent a similar quest for identity as an author and escaped, if only temporarily, Cross Plains; then I suppose you could apply the phrase to the author as well. I am prone to pretentiousness so take it all with a grain of salt. There are far more erudite REH scholars working on this very site who put my efforts to shame.