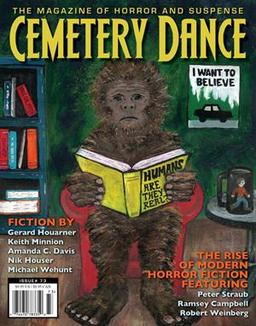 There aren’t a lot of print horror magazines left, so I’m grateful we still have Cemetery Dance. It was founded by Richard Chizmar in 1988, while he was still in college, and it is still edited by him today. Cemetery Dance Publications began to publish books in 1992, and quickly outgrew the magazine, but CD Publications has continued to publish approximately two issues a year of the magazine for the past 27 years.

Issue #73 is cover-dated December 2015, and is currently for sale on the CD website (although the issue is listed as forthcoming.) It has new fiction from Gerard Houarner, Keith Minnion, Michael Wehunt, Nik Houser, and Amanda C. Davis. Here’s the complete contents.

“A Devil Inside” by Gerard Houarner
“Down There” by Keith Minnion
“The Inconsolable” by Michael Wehunt
“Citizen Flame” by Nik Houser
“Voices Without Voices, Words With No Words” by Amanda C. Davis

“The Rise of Modern Horror Fiction” by Christopher Fulbright

Cemetery Dance is edited by Richard Chizmar and published by Cemetery Dance Publications. It appears twice a year (roughly). Issue #73 is cover-dated March 2016. It is 80 pages, with a cover price of $9.95. The cover art is by Sarah X Dylan; interior art is by Zach McCain, Chris Bankston, Steve Gilberts, Chad Savage, and Glenn Chadbourne. Order copies directly at the CD website.