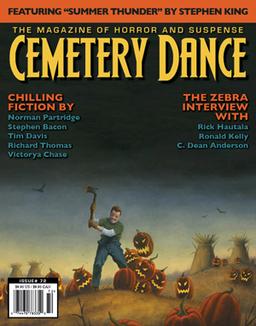 Cemetery Dance calls itself a magazine of horror and suspense, and I think that describes it pretty well. It has a nice mix of fiction, interviews, news, and reviews. It’s not a digest, and has plenty of interior art, both of which I appreciate.

Cemetery Dance is edited by Richard Chizmar and published by Cemetery Dance Publications. It appears twice a year (roughly). Issue #72 is cover-dated January 2015. It is 80 pages, with a cover price of $9.95. The cover art is by Stacey Drum; interior Ar is by Chris Bankston, Mark Edwar Geyer, Stephen C. Gilberts, Chris Odgers, Shane Smith, and Luke Spooner. Order copies directly at the CD website.

Wow! Where did this come from? They even have Steven King! John, your magazine rack idea is a good one.

A shout out to Stephen Bacon, a UK writer who gave me a heap of great advice as I was finding my feet in short horror writing a few years back. Google his name, find his site and check out his work – someone with his talent has a bright future in the field.

Wow — I remember buying Cemetery Dance a long, long time ago (back in the 1990s when I was reading more horror). Glad to see they’re still around.

> A shout out to Stephen Bacon, a UK writer who gave me a heap of great advice as I was finding my feet in short horror writing a few years back.

Sounds like a stand-up guy. Thanks for sharing, Robert.

> Glad to see they’re still around.

They’re still around — and publishing a lot of great fiction. If you haven’t already, have a look at their website, and explore their book line. Pretty impressive stuff!