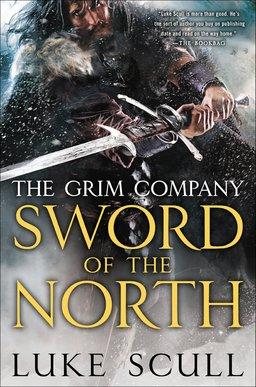 Sword of the North is the sequel to 2013’s The Grim Company, which Tor.com called “Brilliant” and The Daily Mail called “A grisly, compelling read… hugely enjoyable.”

The second volume in the series returns to the hostile, decaying world where the gods are dead… a land desperately in need of heroes. But what it gets instead is a ragtag band of old warriors, a crippled Halfmage, two orphans and an oddly capable manservant: the Grim Company.

In The Grim Company, Luke Scull introduced a formidable and forbidding band of anti-heroes battling against ruthless Magelords and monstrous terrors. The adventure continues as the company — now broken — face new dangers on personal quests…

As Davarus Cole and his former companions were quick to discover, the White Lady’s victorious liberation of Dorminia has not resulted in the freedom they once imagined. Anyone perceived as a threat has been seized and imprisoned—or exiled to darker regions — leaving the White Lady’s rule unchallenged and absolute. But the White Lady would be wiser not to spurn her former supporters: Eremul the Halfmage has learned of a race of immortals known as the Fade, and if he cannot convince the White Lady of their existence, all of humanity will be in danger.

Far to the north, Brodar Kayne and Jerek the Wolf continue their odyssey to the High Fangs only to find themselves caught in a war between a demon horde and their enemy of old, the Shaman. And in the wondrous city of Thelassa, Sasha must overcome demons of her own.

Because the Fade are coming…