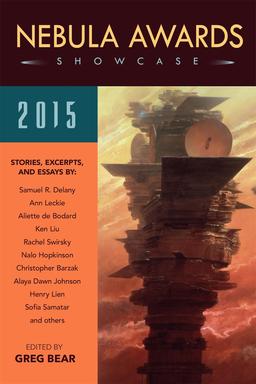 The annual Nebula Awards Showcase volumes, which have been published every year since 1966, gather the most acclaimed short fiction our industry produces each year — including all the Nebula Award winners, and many of the runners-up — as well as author appreciations, yearly wrap-ups, novel excerpts, and other fascinating articles. The 2015 volume contains some of the most talked-about fiction of the past several years, including Rachel Swirsky’s “If You Were a Dinosaur, My Love,” Sophia Samatar’s “Selkie Stories Are For Losers,” Aliette de Bodard’s “The Waiting Stars,” and many others. Here’s the description.

The Nebula Awards Showcase volumes have been published annually since 1966, reprinting the winning and nominated stories of the Nebula Awards, voted on by the members of the Science Fiction and Fantasy Writers of America (SFWA). The editor, selected by SFWA’s anthology Committee (chaired by Mike Resnick), is American science fiction and fantasy writer Greg Bear, author of over thirty novels, including the Nebula Award-winning Darwin’s Radio and Moving Mars. This year’s volume includes the winners of the Andre Norton, Damon Knight Memorial Grand Master, Rhysling, and Dwarf Stars Awards, as well as the Nebula Award winners, and features Ann Leckie, Nalo Hopkinson, Rachel Swirsky, Aliette de Bodard, and Vylar Kaftan, with additional articles and poems by authors such as Robin Wayne Bailey, Samuel R. Delany, Terry A. Garey, Deborah P Kolodji, and Andrew Robert Sutton.

We covered the previous volume, Nebula Awards Showcase 2014, edited by Kij Johnson, last May (and the TOCs for the now-classic first three volumes are here). Read all about this year’s Nebula winners here.

I actually have the first 1965 volume in hardback in almost fine condition. I don’t remember what I paid for it but it wasn’t much–a few bucks. I’ve seen similar old copies at similarly low prices. Why don’t these volumes demand a higher price? Is this a value trend with all “best of” anthologies?

Great question. I think the real issue is that these volumes aren’t rare (at least not the early ones.) They were really superb anthologies — containing “Repent, Harlequin!” Said the Ticktockman” by Harlan Ellison, “The Doors of His Face, the Lamps of His Mouth” by Roger Zelazny, “Light of Other Days” by Bob Shaw, “The Last Castle” by Jack Vance, “We Can Remember It for You Wholesale” by Philip K. Dick, “Aye, and Gomorrah…” by Samuel R. Delany, “Behold the Man” by Michael Moorcock, and “Gonna Roll the Bones” by Fritz Leiber. And that’s just in the first three volumes!

There were a lot of copies sold, and they were reprinted multiple times. When books are that popular, they’re usually not rare.

They were even reprinted in hardcover by Stealth Press just a few years ago: