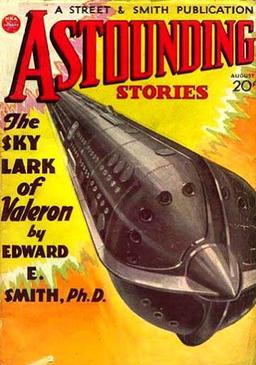 Our friend John DeNardo, editor of the marvelous SF Signal, posted a long article to Kirkus Reviews last month on the history of serialized fiction in SF and Fantasy. I finally had time to sit down and read it today, and found it a very rewarding survey of classic serialized fiction, all the way up to 2015.

In terms speculative fiction stories — that is, science fiction, fantasy and horror stories, which are of particular interest to readers of this column — serialized fiction has a long and interesting history. But just like readers sometimes don’t have the time to read long novels, you may not have the time for a long, sordid history… so let me sum things up….

By the early 20th century, that format was adopted in the United States as well. Magazines were a prevalent venue for fiction back then, and serial fiction — science fiction in particular — received a boon when Edgar Rice Burroughs serialized his novels Tarzan and A Princess of Mars. Both of these stories were later published as novels (in 1914 and 1917, respectively) and both were followed by numerous sequels, some of which were also serialized.

Other authors soon adopted the same publishing model. E.E. “Doc” Smith published his Skylark and Lensman series in serial format in the 1930s, for example. Even decades later, stories were getting published in serialized format.

Thanks for the shout-out!

Sorry it took so long!

Might have been worthy mentioning K. J. Parker’s THE TWO OF SWORDS, currently coming out in serial form from Orbit.

(I might mention that I wrote an article some time ago (2002!) for Strange Horizons about the history of serials in SF: http://www.strangehorizons.com/2002/20020805/rare_bird.shtml)

Rich — say, that’s a fascinating article. Thanks for the link!