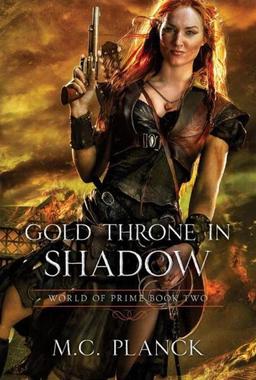 In her review of the first book in M.C. Planck’s new series, Sarah Avery said “Sword of the Bright Lady deals in surprising juxtapositions of familiar tropes… This is a fun book.” She also said it “ends just a breath beyond a cliff-hanger… I want to see Crazy Pater Christopher get even crazier. I want to gawk like a peasant at what he comes up with next.”

Now she’ll finally get the chance, as the second volume, Gold Throne in Shadow, will be released in trade paperback by Pry Books next week.

Christopher Sinclair was a mechanical engineer — until he stepped into a world where magic works and no one has heard of a pistol. Now he’s a priest of war, raised from the dead and promoted to take command of the army regiment he trained and equipped. Sent south to an allegedly easy posting, he finds himself in the way of several thousand rabid dog-men. Guns and fortifications turn back the horde, but Christopher’s troubles are only beginning.

Lalania is a bard with a connection to a mysterious group of scholars Christopher hopes can help him find his way back to his wife and home. But the journey to the scholars is long, and Lalania’s motivations are too murky for him to truly trust her.

Christopher has problems that connot be solved with mere firepower: a wicked assassin, hostile clergymen, dubious allies, and worst of all his own impolite tongue. But all of these pale to mere distractions once he discovers that the true enemy is hidden and is playing the kingdom like a puppet master’s stage. Lalania claims she can help — but will it be enough? And will it get him any closer to returning to our world?