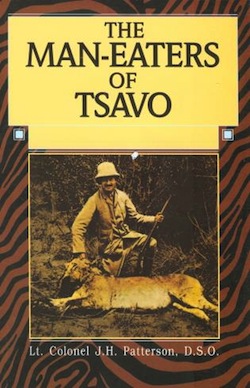 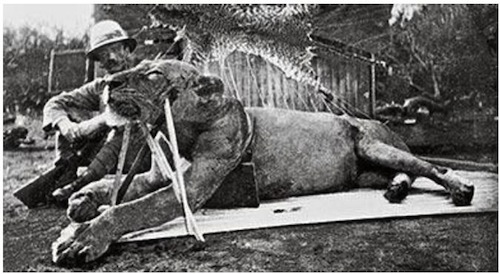 Patterson set out to exterminate these man-killers, and it proved no easy task. He would sit up in a tree overlooking the camp late into the night, but time and again the lions would pluck out an unfortunate worker from the other side of camp. The predators seemed to have an eerie ability to tell where he was, know he was a threat, and hunt elsewhere. In a couple of harrowing passages, they even stalk him!

Patterson took several months to kill one of the lions, and a short time later killed another. By then some hundred workers had been dragged off screaming into the brush to be consumed. The attacks stopped, and Patterson came to the sobering conclusion that these two lions had been responsible for all the deaths, following the workmen’s camp as it progressed along the railway line.

Once his work in East Africa was finished, Patterson went home to England, where his house was adorned with two lion skin rugs made from the man-eaters of Tsavo. His memoirs of the hunt became a bestseller and remains popular to this day.

It’s easy to see why. Patterson has a gripping writing style and his hunting scenes will keep you turning the pages. He also gives detailed accounts of the scenery, local cultures, and other hunts he went on while in British East Africa. The text is liberally illustrated with interesting photos of dead animals and topless natives, which sadly in the Lyons Press edition I read were poorly reproduced.

Of course this is all horribly un-PC to the 21st century reader, and many online reviewers seem to feel obliged to denounce Patterson. It makes you wonder why they picked up his book! While I didn’t find myself as scandalized as when I read The Turner Diaries, I did raise an eyebrow at some of the passages. This is a book of its time, and while we may have moved on to a supposedly better mindset, Patterson’s work deserves its status as a classic for its brilliant writing and the glimpse it gives into a vanished world.

I think how horribly un-PC such writing is perceived depends on the reader. Despite my handle, I live in a small city in the middle of an upper Midwestern state with a rich hunting tradition. I teach at a mid-size university and my students will happily relate their big game hunting exploits (black bear) to their classmates. While some students and many faculty react with horror, many students and some faculty are interested in the details of the hunt.

The irony that gets me with regard to the anti-hunting crowd is the lack of awareness of hunting’s role in population control and on the most significant threats to wildlife population: loss of habitat. That loss of habitat is due to human development. Yet those blissfully unaware hop in their cars, drive to strip mall city, and then back home to the suburbs where their chronically offended sensibilities will react to the latest viral outrage.

That’s one thing that always takes me a bit aback when I reread Haggard — the massive mounds of elephant, lion, etc., carcasses Allan Quatermain leaves in his wake as he treks across Africa. But yes, it was a very, very different time.

I hunt, and I do not apologize for it. But I do not trophy hunt; only grouse for my table. However, in many African countries, big game trophy hunting is a major source of foreign capital, much needed in poorer countries. Most hunting activities are very closely monitored, and game is not over-harvested. We who live in such luxury should not be so quick to judge those who live in poverty…

The Man-Eaters of Tsavo is the basis for the 1996 film The Ghost and the Darkness, starring Val Kilmer and Michael Douglas, which I thought had the tone of a fine horror film.

I was quite started to discover it was based on a true story after I watched it! The scene where they uncover the lions’ cave, filled with hundreds of bones, was particularly chilling.

A guy who was responsible for the safety of several hundred humans, of whom about a hundred were killed by two lions, killed the two lions. The hunting part of the story doesn’t seem to me like an ethical problem.

I don’t know how Patterson talks about the people he met whose backgrounds were different from his own. There’s probably some colonialist arrogance there, if he’s a man of his time. That might make the book problematic, but lots of things worth reading are problematic.

If I were about to be eaten by a lion, and some colonialist jerk who had uninformed things to say about my ancestors shot the lion before it could eat me, I’d call that an occasion for compartmentalization. I don’t know that I’d be glad to be building a railroad for someone else’s empire, but I’d probably be glad to be alive.

John beat me to it. The Ghosts in the Darkness as indeed a fine movie that was full of suspense. You go in expecting a classic Jock of the Bushveldt of The Ivory Trail type story but the suspense soon gets you.

> If I were about to be eaten by a lion, and some colonialist jerk who had uninformed things to say about my ancestors shot the lion before it could eat me, I’d call that an occasion for compartmentalization.

I love that line! When I read through these comments, it’s always immediately clear which writer has won a Mythopoeic Award, and why. 🙂

I haven’t read that, but I have read some of Jim Corbett’s books, who hunted a lot of big cats in India that preyed on people and livestock. He had some fascinating stories to tell. (The “how did I get red mud on my boots?” one is my favorite, as it’s an awareness story, not a hunting story.)

Corbett said he always examined the body of a man-eater he killed, and every time he found an indication of some old injury that eventually led to it needing easier prey.