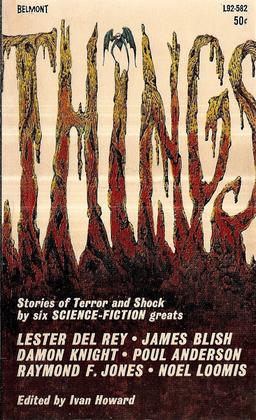 Belmont Books, publisher of this anthology, apparently thrived throughout the Sixties. Early on it looks like many of their books leaned toward horror, with SF being sprinkled into the mix more as time went on. Things presents itself more as horror (the subtitle is Stories of Terror and Shock by six SCIENCE-FICTION greats) but there’s not much horror content. It’s a short volume that collects six fairly uninspired novelettes and short stories first published in SF magazines in the early Fifties.

“The Gift of the Gods,” by Raymond F. Jones

An interesting take on aliens landing on Earth, as the whole affair is somewhat derailed by bureaucracy and pettiness. It could have been a lot shorter and it was a bit preachy in spots but not bad overall.

I like pulp as much as the next guy and maybe a bit more — although it’s best taken in moderate doses. This one’s pretty pulpy, with the LGM of the title beseeching a mining engineer from Earth to evacuate from his home planet of Uranus. Entertaining but not particularly exceptional.

“Turn of a Century,” by James Blish

To be quite honest, I had no idea what was going on here. It was a flash piece set in a post-apocalyptic setting and featuring a bunch of journalists waiting for a new century to dawn. And there’s an ark. Maybe I need to get smarter.

“Courier of Chaos,” by Poul Anderson

This one opened and closed with guys hashing out philosophical arguments, which really didn’t work for me at all. In between, a moderately interesting variation on time travel, with a being from Earth’s distant future popping back to the Cold War-era Soviet Union. Some interesting ideas but it didn’t quite come together.

A few stories in this book made me question whether the stories were muddled or my thought processes were — maybe it was a little of both. In this one the setting is rural and the tale apparently takes place in the wake of one of those apocalyptic events that are all the rage in fiction nowadays. Much of the plot seems to revolve around how one man’s eccentric father annoys him. Then the father invents some type of gadget that transcribes human speech. That’s about all I got out of it.

“In the Beginning,” by Damon Knight

Another muddled one having to do with some sort of energy beings and a project they’re working on. It could have been a contender but didn’t quite make it. It meandered a lot and it wasn’t always clear what was going on (which could be the fault of the reader, I guess). But the ending and the underlying premise were kind of interesting. I won’t spoil it outright but the words “in the beginning” are a clue.

William I. Lengeman III’s last review for us was Cloud Sculptors, Dragon Riders, and an Unearthly Craps Game: Nebula Award Stories 3, edited by Roger Zelazny. He holds forth at www.wileng3.com.