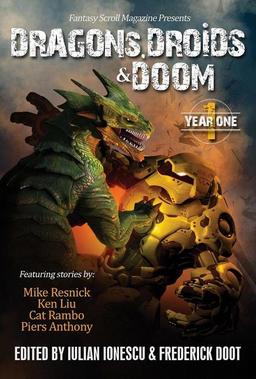 Fantasy Scroll Magazine is one of the great success stories of genre crowdfunding. It was launched with a successful Kickstarter campaign in April 2014, in which it raised enough to fund itself for a full year (four issues). All four issues were released on time, as promised, and since then it’s been operating nicely under its own steam. This year it upgraded to bimonthly, attracting top talent like Robert Reed, Sarah Avery, Pauline J. Alama, Beth Cato, and many more, and the magazine continues to prosper.

Fantasy Scroll has supported itself by selling merchandise and launching a mobile app — and through a Starlight Patrol of enthusiastic backers and supporters at Patreon who help keep the magazine going. Best of all, they’ve announced a new line of anthologies, the first of which, Dragons, Droids and Doom, contains all 51 short stories published in their first year. Here’s editor Iulian Ionescu:

It’s with great pleasure that I introduce you to Dragons, Droids and Doom, Year One, the very first anthology from Fantasy Scroll Magazine. It contains all stories published in the year 2014, and what a cool bunch of stories! There are 51 stories from 49 authors, including names you’ll recognize, such as Mike Resnick, Ken Liu, Piers Anthony, and Cat Rambo. You will also find stories from up-and-coming authors and some from first-time published authors. All in all, I believe it’s a great mix of fantasy, science fiction, horror, and paranormal short stories that will appeal to a wide audience.

Dragons, Droids and Doom, Year One will be published in early November, 2015. It is $14.95 in trade paperback, and $5.99 for the ebook. The cover is by Mondolithic Studios. Read more — including the introduction by Mike Resnick, and two sample stories — at the website, and see the massive table of contents here.