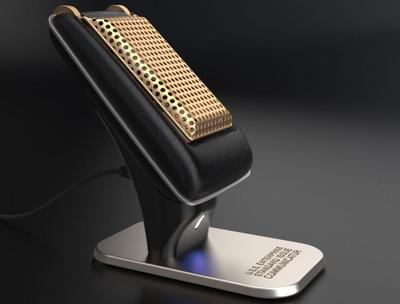 Ever since Leonard Nimoy was spotted using the Motorola StarTac phone in 2000, I’ve dreamed about getting a cell phone shaped like a Star Trek communicator.

Now Engadget reports that the long, long (long) wait may finally be over, as The Wand Company has procured a license to make and sell a Bluetooth accessory shaped just like a communicator.

Technically, the replica prop is just a simple Bluetooth handset with pretty basic functionality: it takes calls and plays music. That’s about it. It’s pretty snazzy looking though — the Communicator is a die-cast metal, aluminum and ABS replica modeled after a 3D scan of the original “Alpha Hero” prop, made and manufactured by The Wand Company. Its magnetic charging connector turns the unit into a pretty nice display piece, too. It’s pricey, though: the Communicator will cost $150 when it starts shipping in January — the same price as the replica phaser (and TV remote control!) the manufacturer made last year.

A friend who does a lot of public speaking start presentations by saying, “Set cell phones on stun.” She’s probably pre-ordered one of these.

Ha! I may have to steal that one next time I give a speech. 🙂

I am firmly in the “perversely eccentric” camp – I have never owned a cell phone. But…damn. They may have gotten me at last.

I find it odd that the Engadget article says, “it takes calls and plays music. That’s about it,” as if that’s a flaw somehow. That’s twice the functionality of the communicators on the show, and they were the product of the 23rd Century engineering!