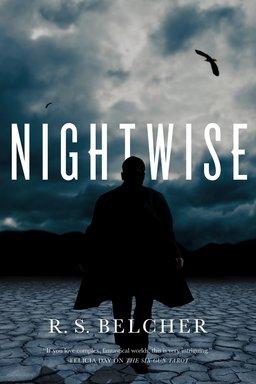 With his newest novel, Nightwise, Belcher tries something a little differenr: a brand new new urban fantasy series that explores a gritty occult underworld, with a resourceful and cynical hero. It will be released in hardcover from Tor next month.

In the more shadowy corners of the world, frequented by angels and demons and everything in-between, Laytham Ballard is a legend. It’s said he raised the dead at the age of ten, stole the Philosopher’s Stone in Vegas back in 1999, and survived the bloodsucking kiss of the Mosquito Queen. Wise in the hidden ways of the night, he’s also a cynical bastard who stopped thinking of himself as the good guy a long time ago.

Now a promise to a dying friend has Ballard on the trail of an escaped Serbian war criminal with friends in both high and low places — and a sinister history of blood sacrifices. Ballard is hell-bent on making Dusan Slorzack pay for his numerous atrocities, but Slorzack seems to have literally dropped off the face of the Earth, beyond the reach of his enemies, the Illuminati, and maybe even the Devil himself. To find Slorzack, Ballard must follow a winding, treacherous path that stretches from Wall Street and Washington, D.C. to backwoods hollows and truckstops, while risking what’s left of his very soul…

See all of our recent reports on the best in upcoming fantasy here.