I don’t often hear of fantasy described as “In the tradition of Tolkien and Lovecraft!” Just seems like an odd mix to me. But that’s exactly how Adrian Cole’s first three novels, collectively known as The Dream Lords trilogy, are described.

Cole is a British writer also known for his four-volume Omaran Saga, and his more recent trilogy The Voidal, which Fletcher Vredenburgh called “an endless collection of interesting settings: universe-sized dimensions; monster-infested pocket worlds; a realm filled not with planets but islands that float in space.” But I was first introduced to him with The Dream Lords, which he reportedly wrote after reading Tolkien’s The Lord of the Rings while working in a library in the mid-seventies.

The Dream Lords saga was published by Zebra Books in 1975-76, with a series of covers by Thomas Barber (above). They have not been in print since 1977. The publication order was:

Zebra has a (rather deserved) rep as a third-rate publisher, mostly for the lack of editorial care put into their books, but they did publish a lot of sword & sorcery and horror in the mid-seventies — including Andrew J. Offutt’s seminal Swords Against Darkness anthologies, and about a dozen volumes of Robert E. Howard’s short fantasy. They also took chances on unknown authors like Cole, and a publisher who does that is not to be dismissed lightly in my book.

While the books have not been reprinted since 1977, Zebra did switch up the covers a bit during the roughly two years they were in print, and sent them out into the world with some eye-catching wraparound art by Barber. Here are the complete covers for all three (with the back cover copy), including the original cover for Lord of Nightmares (cover artist uncredited.) Click for bigger versions. 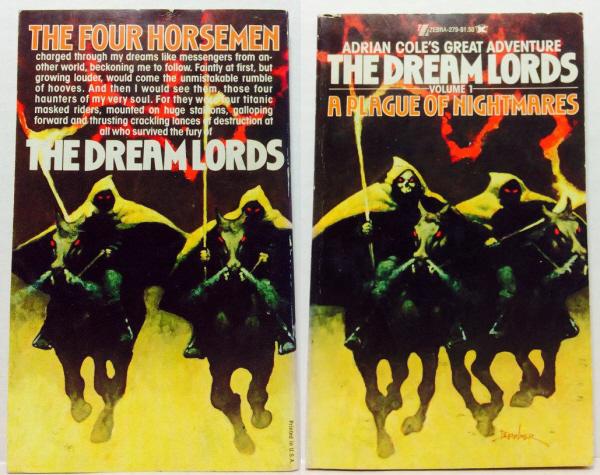 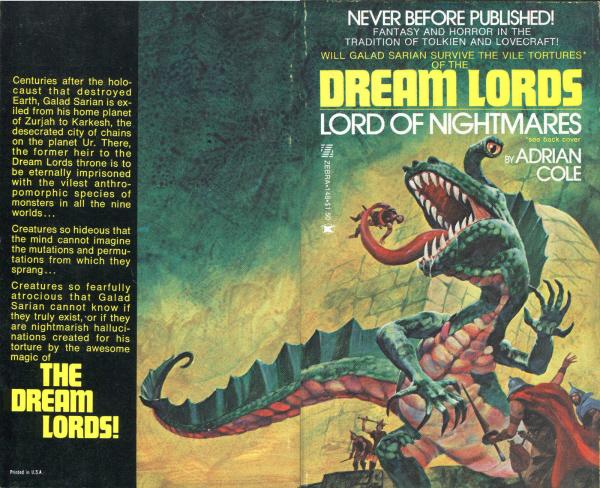 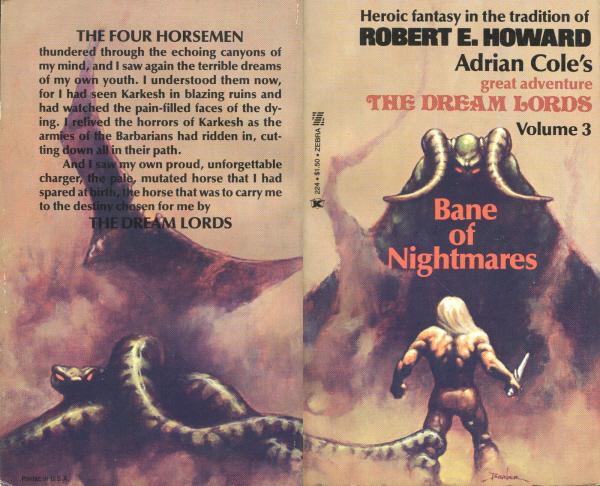 See all of our previous coverage of Series Fantasy here.

Barber’s art drove me to mowing enough lawns to buy these books when I was a chimp. I wish they had a kindle version of the Dream Lords today. I have no idea where those books are now. I’d love to see a collection of Barber’s works. His covers may lack tentacles but they are equal in Ape approval.

I’d say that a mix of Lovecraft and Tolkien is accurate. I have a lot of Zebra books in my collection too.

Where are the editors like Lin Carter and Wollshiem today? I sometimes wonder if Burroughs, Lovecraft, and Robert E Howard would not have been given a second life if not for them. I don’t see this genre or this type of fiction surviving the sniff test of publishers today. I don’t think they take the risks of new writers with this brand of fiction as much. Thankfully Howard Andrew Jones has brought back Harold Lamb and added his own works to the sword and sorcery genre. I think we have to clone the minds of Howard Andrew Jones and place them at the heads of a lot of publishing staffs. That would free him up to continue his wonderful Dabir and Asim stories while finding new writers like Adrian Cole and old treasures like Harold Lamb. I’d put you in that category too John. You have a remarkable eye for the right kind of talent.

Cole’s Omaran and Star Requiem sagas are on Amazon Kindle. I would bug him and his publishers with letters, but I need to read these first

This is the cover from my copy of Plague of Nightmares:

(It’s kind of a skull inset with gems or something.)

Yeah, editorial control was not Zebra’s strong suit. Or their any suit. They also misnumbered a couple Talbot Mundy Tros of Samothrace volumes. (Which they blurbed as “Heroic fantasy in the tradition of Robert E. Howard”.) But they did publish and/or rescue some great stuff.

Lou Anders, formerly of Pyr Books, was the closest I can think of to the editors Wild Ape is nostalgic for. Fortunately for Anders, and a mixed blessing for us, Anders’s own writing career is successful enough that he’s not working as an editor anymore. I hope someone with similar editorial proclivities moves into his ecological niche. It’s possible that Rene Sears, who succeeded Anders in the big chair at Pyr, will turn out to acquire similar things.

[…] they’re short and were only $1, I got the 1st and 3rd Dreamlord books to supplement the 2nd (which was never printed with a number in either of its editions apparently)… for me to poop on.  Or not.  We’ll […]