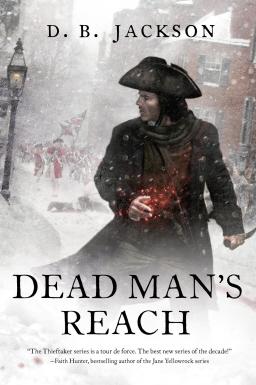 Black Gate readers may remember we published a popular short story by David B. Coe, “Night of Two Moons,” in Black Gate 4. In a fascinating article written for us last year, The Life and Times of a Midlist Author, David B. Coe wrote:

Writing now as D. B. Jackson, I am the author of The Thieftaker Chronicles, a historical urban fantasy series set in pre-Revolutionary Boston. The first two books, Thieftaker (Tor Books, 2012) and Thieves’ Quarry (Tor Books, 2013), have been received very well critically and did well enough commercially that Tor bought two more books from me. The first of these, the third in the series, is called A Plunder of Souls and it drops on July 8, 2014. (Please buy it. In fact, feel free to buy a few copies; they make great gifts and come in an attractive package complete with artwork by Chris McGrath. We now return to our regularly scheduled blog post…)

The fourth Thieftaker novel, Dead Man’s Reach, will be out next summer.

In addition, David (as D.B. Jackson) interviewed his main character Ethan Kaille, the Thieftaker, in a funny and very insightful post for us in July of 2013.

The fourth novel that David mentioned in his article last year, the highly anticipated Dead Man’s Reach, is finally due from Tor Books next month. It is a stand alone story, and can be enjoyed separately from the others in the series.

Boston, 1770: The city is a powder keg as tensions between would-be rebels and loyalist torries approach a breaking point and one man is willing to light the match that sets everything off to ensure that he has his revenge.

The presence of the British Regulars has made thieftaking a hard business to be in and the jobs that are available are reserved for Sephira Pryce. Ethan Kaille has to resort to taking on jobs that he would otherwise pass up, namely protecting the shops of Torries from Patriot mobs. But, when one British loyalist takes things too far and accidentally kills a young boy, even Ethan reconsiders his line of work. Even more troubling is that instances of violence in the city are increasing, and Ethan often finds himself at the center of the trouble.

Once Ethan realizes why he is at the center of all the violence, he finds out that some enemies don’t stay buried and will stop at nothing to ruin Ethan’s life. Even if that means costing the lives of everyone in Boston, including the people that Ethan loves most.

See our report on the Top New Releases in June here, and all our coverage of upcoming fantasy releases here.