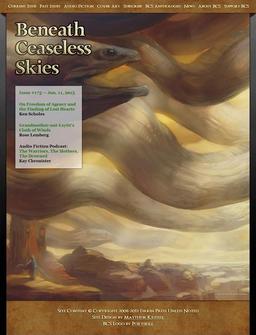 You know what happens if you neglect Scott H. Andrews for 15 days? He publishes two issues of Beneath Ceaseless Skies, making you look out of touch and behind the times.

So here we are playing catch-up, because Scott publishes magazines faster than I can write about them. Why doesn’t he publish one issue a year, like a normal person?

Let’s start with issue #175, ’cause it has monsters on the cover, and we know what that means (it means it’s awesome). The issue is cover-dated June 11, and contains two short stories, a podcast, and a reprint.

“On Freedom of Agency and the Finding of Lost Hearts” by Ken Scholes
“I’ll kill you in the morning,” I mumbled into the drool I’d made on his pillow.

“Grandmother-nai-Leylit’s Cloth of Winds” by Rose Lemberg
Behind us, a great hole in the ground gaped, but I wouldn’t have dared look into it even if grandmother hadn’t pulled me inside the tent.

Audio Fiction Podcast:
“The Warriors, The Mothers, The Drowned” by Kay Chronister
Ana thought the land of the dead would be empty, but it is full to bursting.

From the Archives:
“Throwing Stones” by Mishell Baker (originally published in BCS #47)
By the end of each night I had nearly adjusted, only to be wrenched back to my natural form at the first whisper of dawn.

Ken Scholes is the author of the 4-volume fantasy series Psalms of Isaak (Lamentation, Canticle, Antiphon, and Requiem.) Rose Lemberg co-edits (with Shweta Narayan) Stone Telling, a magazine of boundary-crossing poetry; on her own she’s edited Here, We Cross, The Moment of Change, and the upcoming An Alphabet of Embers.

The cover art this issue is “Migration” by Julie Dillon. 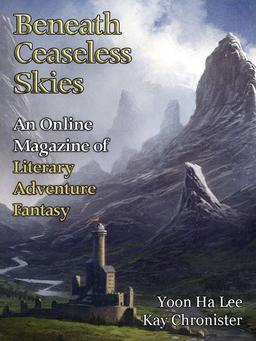 Issue #174 contains short stories by Yoon Ha Lee and Kay Chronister, plus a podcast and a reprint from BCS #151.

“Two to Leave” by Yoon Ha Lee
I had not entered the parched lands entirely unprepared. I had an excellent pair of boots — good boots are underrated everywhere — and I was almost glad the ferryman would not accept them in exchange for passage. I had the Apiarist’s Gun, made to fit my hand. And as for nourishment, that took care of itself, even here.

“The Warriors, The Mothers, The Drowned” by Kay Chronister
Ana thought the land of the dead would be empty, but it is full to bursting. With gods’ turquoise bones, with small grimacing golems fashioned from maize and bone-thin fellow travelers wandering across the desert on their hands and knees, with temples so black and shimmering that she can’t quite make herself look at them.

Audio Fiction Podcast:
“Two to Leave” by Yoon Ha Lee
The Drought Guard had sent twelve-and-twelve of their own after me, which might have held numerological significance if I still cared about such things.

From the Archives:
“Crossroads and Gateways” by Helen Marshall (originally published in BCS #151)
“You would ask me a question, little god?”

Yoon Ha Lee has published short fiction in The Magazine of Fantasy and Science Fiction, Clarkesworld, Tor.com, and other places. (Interestingly, multiple BCS bios call Yoon Ha Lee “he,” whereas her Wikipedia entry calls her “she,” and her website refers to her only as “Yoon Ha Lee.” An error, oversight, or evidence of a gender-fluid identity? Possibly all three.) Kay Chronister won the 2015 Dell Magazine Award; she currently lives in Phnom Penh, Cambodia.

The cover art is “Twisted Mountain Valley” by Christopher Balaskas.

We last covered Beneath Ceaseless Skies with issue #173.

John in an earlier post I said that I had a friend’s affection for Sarah Avery and Nick Ozment because they always disarmed me with what they say and make me smile. I left you out because I tend to reach for my pocket book when you speak and my smile is delayed until AFTER I read your recommendation. I didn’t want you to feel left out or make you feel undervalued. This looks good John. You are awesome sir.

Thank you Ape! And I certainly didn’t feel left out. If I encourage just a few of our readers to open their pocketbook for a new magazine, that’s all the thanks I need. 🙂