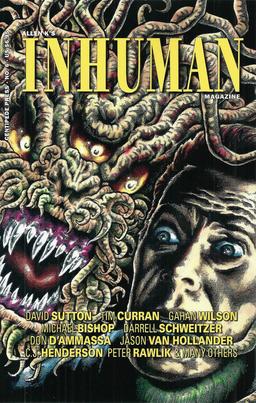 Well here’s an unexpected bit of good news. Allen Koszowski’s Inhuman Magazine, which I had listed as defunct in our mid-May Fantasy Magazine Rack, has just released a new issue.

Allen Koszowski is a terrifically talented guy. I hired him to illustrate our reprint of Edmond Hamilton’s first story, “The Monster-God of Mamurth,” and he delivered three marvelous pieces that appeared in Black Gate 2. Since 2004 he’s been involved in the most noble and selfless act of creation known to humankind — publishing his own magazine. Allen K’s Inhuman Magazine is a monster magazine that consistently features the top names in dark fantasy and horror, and Allen handles the art for each story personally.

The magazine is huge — 208 pages! — and copiously illustrated. It is perfect bound for the criminally low price of just $6.99. Copies of the latest issue can be hard to come by, but at least two eBay vendors are currently stocking it at cover price. Check it out — I think you’ll enjoy it.

We last covered Inhuman Magazine with Issue #5. See all of our recent magazine coverage here.