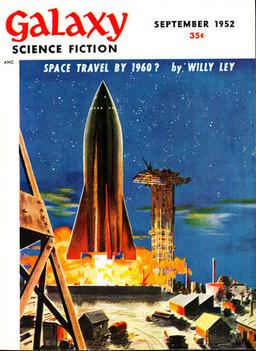 With this issue, Galaxy completed its second year of publication. That’s 24 issues of top-notch science fiction. It’s tough to match that stamina, and I applaud H.L. Gold, his staff, the authors, and the artists for staying the course.

“Delay in Transit” by F. L. Wallace — Denton Cassal is a sales engineer, traveling toward the center of the galaxy to solicit a top scientist to work for his company on an instant communication device. His journey takes him through Tunney 21, a planet inhabited mostly by Goldophians, who look somewhat like seals. Equipped with an AI device named Dimanche, Cassal is able to read people based on their body chemistry and temperature. He’s being pursued, but Dimanche’s intelligence and advice give Cassal confidence, provided he’s willing to listen.

This piece was reprinted in Bodyguard and Four Other Short Science Fiction Novels From Galaxy edited by H. L. Gold in 1962. In this issue, however, it was credited as a novella. I liked the use of the AI as well as the setting of Tunney 21. Wallace also does a nice job with the pacing.

“The Snowball Efect” by Katherine MacLean — To prove the value of sociology (and his own department), Wilton Caswell meets with the university president to create a list of rules for an organization to employ in order to grow membership. If an organization adopts the rules and shows growth, then the president has quantitative proof of the depatment’s value; the underlying principles of philosophy can promote success to all graduates. Caswell and the president choose the Watashaw Sewing Circle for their experiment and then withdraw to see what happens. It turns out that the rules work. They work so well, in fact, that the sewing group expands into a broader organization — one focused on civic welfare and politics. 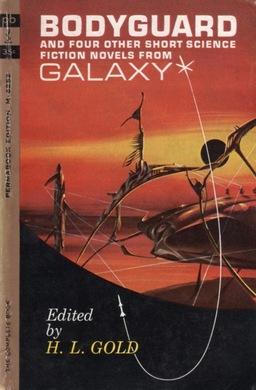 While starting a bit slow, the story builds into something amusing.

“Today is Forever” by Roger Dee — Boyle finds out that the visiting aliens are offering immortality to key individuals. Criminal behavior has been eliminated to the point that security isn’t needed, so Boyle decides to simply take what he wants by force.

This story had a lot of background setting through dialogue, and that bugs me. A little of that is fine, but if a complex world is solely explained through long dialogue, I get antsy.

“The Moons of Mars” by Dean Evans — A security agent on Mars meets a Martian boy with a remarkable talent; unlike other Martians, he can whistle. The agent follows the boy out of curiosity, leading him to the boy’s family and their tragic past.

H. L. Gold may not have liked Bat Durston, but this is clearly a space western. And a good one at that. This was my favorite story of the issue.

“Tea Tray in the Sky” by Evelyn E. Smith — Michael leaves the familiarity of the brotherhood to venture into the galaxy. He meets a salesman named Pierce who helps acclamate Michael to society and all of its rules. And there are quite a few to remember so as not to offend anyone from anywhere.

I think a fun, tongue-in-cheek story like this will always resonate with people. I’m not familiar with Smith’s other work, but I’ve read that wit and humor are hallmarks of her stories. 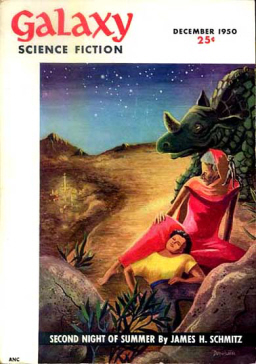 “The Mousetrap” by Gordon R. Dickson — Helmut Perran wakes on a desserted planetoid with no memories. Over time, he begins to recall his life in pieces – a series of blunders in an attempt to return to Earth with full citizenship. When aliens visit his world, he fears them, yet they would do well to fear him.

This has the feel of a Twilight Zone episode — something strange is happening, and the character doesn’t understand why. It even has a zinger at the end. But it wasn’t as strong as a Twilight Zone script. It could have used a bit more oomph. Dickson was a prolific author of short stories and novels. He won three Hugo awards and one Nebula award in his lifetime.

“The Altruist” by James H. Schmitz — Colonel Magrumssen notices his scissors are missing, but they return while no one is around. He learns from an assitant to the Minister of Statistics that society as a whole experiences a two percent normal loss – that a small percentage of items indiscriminately disappear. Magrumssen determines to find the cause, allowing even the most bizarre hypotheses as he searches for the truth.

I don’t think it’s a plausible story. That doesn’t take away from seeing how the protagonist’s character changes during his investigation; that part held my interest. But this isn’t nearly as strong as Schmitz’s “Second Night of Summer” published in Galaxy’s December, 1950 issue.

Matthew Wuertz’s last retro review for us was the August 1952 issue of Galaxy Science Fiction.

Definitely a strong issue. “The Snowball Effect” is a major early MacLean story. “Delay in Transit” is one of a couple of significant F. L. Wallace stories (“Big Ancestor” is the other).

As for the attribution of “novel” in the later anthology, that was a polite fiction often used in those days: novellas were “short novels”, see, and so then you could get away with calling them “novels” if you wanted.

As for Schmitz — definitely agree. “The Altruist” is very minor Schmitz, and “The Second Night of Summer” is a classic.

I find a decent number of Galaxy authors overlapping other genres. It seems more common than today, although I suppose it’s hard to tell because authors will use pseudonyms, hiding their identities.

Sorry about my tardiness. May is a busy month. On the other hand, June is a very lazy month for me, so I will probably be even later 🙂 Once I have finished working my way through my Free Comic Book Day acquisitions, I will get to work on the October issue.

“Delay in Transit” is a nice detective/adventure story with lots of surprises. It is hard to say too much without giving away the unexpected twists and turns, but this story does justice to the adventurous side of science fiction.

“The Snowball Effect” was enjoyable but much more predictable. “Amusing” is a good word to describe the effect of the social experiment.

“Today is Forever” blends several classic themes nicely: Aliens, immortality, crimeless society, and justice. Ahhh, justice. Boyle’s punishment was cruel but he SO had it coming.

I enjoy space westerns, so “The Moons of Mars” was a winner for me too, though not my favorite of the issue (“Transit”). Again, I could see where the story was going, but the narrative made the journey worthwhile. There was a lot of real human emotion in this one.

Willy Ley’s essay about potential space travel was interesting. He discusses several financial and logistical problems about getting rockets into orbit, and whether or not we will be ready before 1960. I wish I knew more about the early days of the space program so I could say how prescient he was, but I am guessing he did just fine.

The science articles in Galaxy and F&SF are always a nice diversion. Ley and Asimov keep us scifi nerds grounded in reality once per issue 🙂

“Tea Tray” would have been funnier if it was not so REAL. Once again, science fiction is a perfect forum for social commentary, in this case, over-sensitivity. I wish people would get over themselves and not get offended at every little thing. Sigh.

I agree that “Mousetrap” was much like a Twilight Zone episode. I enjoyed the adventure and discovery that Mr. Perran endures, and, once again, felt that justice was done in the end. Why not (SPOILER) spend your days exploring a new planet? That is a sci fi reader’s dream 🙂

“The Altruist” was something that might have been thought of by a child, and not in a good way. People hiding in shadows and stealing stuff? Really? There might be a good story to be had in this premise, but this one missed the mark.

Thank you for letting me post my brief comments again. I will see you next month.

Good to hear from you, Gus!

Willy Ley had the right ideas about space travel (he even mentioned three-stage rockets, which is what I think we ended up using), but the world couldn’t quite do it by 1960. The first manned space flight was Yuri Gagarin in 1961.

I had a hard time deciding which I liked better – “Delay in Transit” or “The Moons of Mars” and I found myself leaning a bit more toward the western. Both are really good, though.

I am a bit late again this month. Busy school year underway. Wow, I have read the first three calendar years of Galaxy. I enjoy each one of them, but this issue is not high on my list.

The camerage cover did nothing for me. He sounded so excited, but I don’t see it. Kind of a mess.

Ring Around the Sun reminded me of a story I read in F&SF a few years back about a machine that gives you anything you want. The ultimate result is, of course, destruction of the global economy. It does make you wonder if poor efficiency results in more jobs and a better overall economy. Anyhoo, I am enjoying the story and I am sure Mr. Simak will find a new wrinkle to keep me reading. Jay Vickers is an unremarkable hero (?), and his involvement with these new products is peripheral and a bit puzzling.

There isn’t much to Homesick other than some unhappy characters in an unenviable situation. Yes, an interesting premise, but the story doesn’t really develop it much.

That episode of The Twilight Zone is delightfully evil. “I’ve got all the time in the world…” Yes, I remember that one.

The Reluctant Weapon is a story that I am not sure why I enjoyed. I was expecting action and got mostly dialogue. I suppose the success is in the meeting of two minds that could only be this different in a science fiction setting.

I saw Xanadu for the first time this month and I enjoyed that also, though I am not sure why. Please don’t tell anyone that I admitted to liking that movie.

Once again we agree on the favorite. The Leech presented an seemingly insurmountable problem and another deliciously evil ending after the solution (…) was finally found. I really enjoyed watching this one unfold and musing over what they might do.

Cost of Living uses economics as a base for speculation, which is always interesting. Just how much debt are we willing to incur for our conveniences? This story seems outrageous, yet, I would guess that a lot of people would enslave their descendants for any kind of convenience. That is cynical, but, think about all of the short-sighted people you know. I would love to dismiss this story as ridiculous, but it isn’t.

Asimov takes us on quite a ride in The Deep. Following the alien mind around the airplane was fun, and the ending was a nice way to wrap up a story that seemed to have no good resolution. The subplot of human contact and parental relationships was nice.

See you again next month!

Oops, wrong issue. I am trying to get the capcha to take. Sorry.