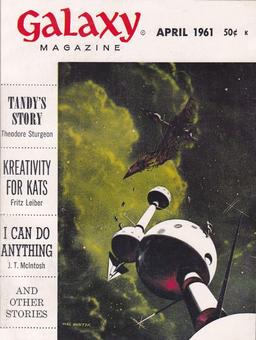 Here’s an issue from Galaxy late in H. L. Gold’s editorial tenure, which probably means that Frederik Pohl was doing most of the editorial work. (Pohl officially took over with the December 1961 issue, but I have read that he was editor in all but name from the late ’50s.)

It’s got a pretty impressive Table of Contents, though it’s a bit disappointing in that the best known writers (Sturgeon and Leiber) are not at their best, and a couple of the other well-known writers (Saberhagen and Lafferty) are early in their careers and not fully developed yet.

It’s also pretty thick, 196 pages including the covers. The feature set is smallish: an editorial by Gold (or at least signed by him) called “Puzzles for Plotters,” which poses a couple of puzzles that (he avers) humans can solve but computers can’t; the brief Forecast squib on what’s coming next issue; Floyd C. Gale’s Five Star Shelf of book reviews, very much capsule reviews – I do note that he liked Peter Beagle’s A Fine and Private Place very much – and Willy Ley’s science column, For Your Information, which covers several subjects: the Gegenschein, the annexation of Patagonia, seven league boots, and letters from readers.

The cover is by Mel Hunter, and it reminded me of Rick Sternbach’s work. It doesn’t illustrate any story, it’s just called “A Derelict in the Void,” and shows a ship investigating a wrecked spaceship. Interiors are by Virgil Finlay, Dick Francis, Jack Gaughan, Harman, and Walker. 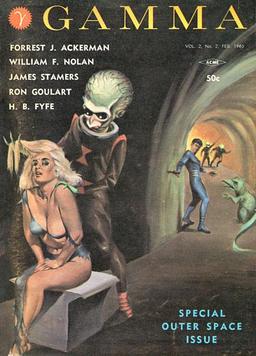 Might as well start with the “Little Known Writer” this issue, James Stamers. He published some nine stories in the field between 1960 and 1965, all but the last in Galaxy or its sister magazines If and Worlds of Tomorrow. (His last story was in a somewhat obscure magazine (to me) called Gamma, that is actually well-remembered by those who were around when it was.)

This particular piece, “Scent Makes a Difference,” is about a man who finds himself in parallel worlds, where his life has taken different paths (especially as regards his choice of field of study and his success or not with a woman named Kate), based mostly on what he smells. His main obsession is finding the version of him that has solved a certain tricky problem in physics… very minor stuff.

Fritz Leiber’s “Kreativity for Kats” is a sequel to one of his classic stories, “Space-Time for Springers.” That story was about a kitten named Gummitch, and it has a moving, essentially tragic ending. Here Gummitch is grown up, and the story concerns his “owners’” concern that he isn’t drinking, and why that might be. It’s not nearly the story “Space-Time for Springers” is.

Daniel Galouye (a bit like J. T. McIntosh) was a prolific writer through the ’50s and ’60s, an interesting writer who never quite was considered in the first rank, but who wrote a great many stories worth a look, often with somewhat off-center ideas. Nowadays he’s probably best remembered for a couple of novels: Dark Universe, which got a Hugo nomination; and Simulacron-3, which has been made into a couple of different movies, including The Thirteenth Floor, which I quite enjoyed.

“Homey Atmosphere” is about a malfunctioning spaceship mostly controlled by AIs. One of the crewmembers has developed something of a crush on the personality of one of the AIs… it seems giving them personalities is a new experiment. Thus he resists the attempts of the others to abandon ship… he wants to save the AIs as well. This is pretty nicely done, with a satisfying and unexpected resolution.

“All the People” is a very early Lafferty story. The voice is familiar, if not fully developed. The story is pretty good, if a bit more traditional than usual for Lafferty. It’s about a person cruelly called “Tony the Tin Man,” he thinks because his father was a junk dealer. But in reality he’s a “restricted person,” a cyborg attached to a computer, able to sense the feelings of all the people in the world, and so to detect if any are unexpected – perhaps invading aliens. And how would a “restricted person” react to an invasion? 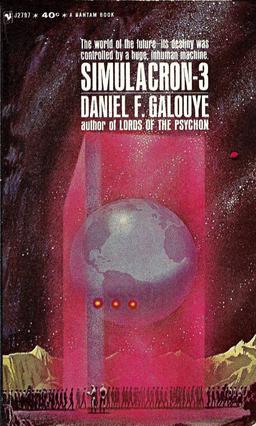 The short-short, Roger Dee’s “The Feeling,” is a minor work on an overfamiliar theme, about the first Mars flight, and how the astronauts react when they leave the vicinity of Earth. They don’t react well – but I wasn’t convinced. I should add that I say “overfamiliar,” but it wasn’t overfamiliar when this story appeared… likely it was one of the earliest stories to posit that space travel could be psychologically dangerous to people.

Fred Saberhagen’s “Planeteer” was only his second published story. He was a Galaxy discovery – his first piece had appeared in the February issue, and his third appeared in the May If. The stories that made his reputation, the Berserker series about malevolent AIs in space, began appearing in the January 1963 If.

“Planeteer” is competent enough, but it reads like distinctly second-rate Poul Anderson. A starship has come to a new planet, and it’s time for the “planeteers,” a contact team of sorts, to meet the locals. The humanoid locals seem to be in a familiar pattern – one racial group is oppressing another – and the planeteers end up recruiting members of their team that look like each side of the local conflict, to quite predictably bring reform. Thoroughly mediocre, but readable enough.

I’ve discussed J. T. McIntosh numerous times in looks at 50s/60s magazines. He was a Scottish writer (real name James MacGregor) who published close to 20 SF novels and over 60 stories between 1950 and 1979 (he also wrote in other genres). He retired about then, but lived for three more decades. I first encountered him as a teen, reading my library’s copy of One in Three Hundred (his second novel). It was fairly fun, but I didn’t see his byline again until I began reading old magazines.

His stories are reliably entertaining, and often built around unusual sociological ideas, but sometimes annoying, as they can seem to manipulate the setup to advance the central idea; and also because his world-building seemed thin (something he admitted: his philosophy was to emphasize his main idea, and not to distract the reader with other details). I’ve long felt that for a writer so prolific his sudden and nearly complete disappearance from the consciousness of SF readers was unusual. A “best of” collection, focused on his ’50s work, would be an interesting book (though it’s hard to see it selling, alas).

“I Can Do Anything” is about a man named Sammy Talbot, who has been exiled to a mining planet because of a dangerous ability to make anyone do what he wants. He was caught and implanted with a device that can scramble his brains if he’s detected using that power. He has a minder, an unpleasant man named Cliff, and he has one friend, a prototypical whore with a heart of gold. The plot turns on Cliff’s desire to marry the rich girl he’s bedazzled, and move back to Earth. But for that to work he has to get Sammy out of the way. The resolution follows simply enough from the setup. Nothing too terribly special, really, except for an effectively moving conclusion.

Finally, “Tandy’s Story” was for me a bit of a disappointment: quite minor Sturgeon, to my taste. It has explicit autobiographical elements: it’s about a little girl named Tandy, with a brother named Robin and a sister named Noël… a look at the names of Sturgeon’s actual children will be instructive. Tandy has a favorite toy, a stuffed doll, and she’s not the best kindergarten student. Then something happens in outer space, and Tandy begins treating the doll unusually, building a special house for it, and otherwise acting strange … and by the end, she’s a much better student, too. Easy enough to see what’s going on, and for me it was never terribly interesting, though, Sturgeon being Sturgeon, the telling is effective enough.

Rich Horton’s last piece for us was an article on the 2015 Hugo Nominations. See all of Rich’s retro-reviews here.