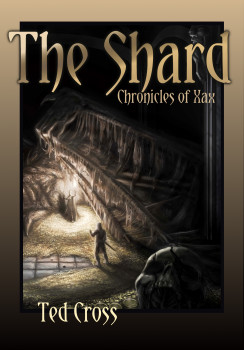 Ted Cross’s The Shard takes place in a world of elves, dwarves, and humans. Millenia ago, dwarves and elves warred against one another with devastating losses on both sides. Only when it was almost too late did they realize that they had been tricked by the corrupted wizard Bilach, leaving themselves vulnerable to his conquering armies. They combined forces and defeated Bilach. Afterward, the remaining wizards created a tower called the Spire of Light, with a great crystal atop enchanted to encourage peace. Centuries later, the dragon came and destroyed the tower and the crystal. Now a new threat has appeared, and the only way to defeat it is to find the sole remaining shard of the crystal, hidden in the lair of the dragon who destroyed it.

Wisely, the author doesn’t lay out the ancient history quite so directly as I’ve done here. Told this way, it seems too simple, too familiar. Instead, the history is told in bits and pieces, not through the eyes of the elves or the dwarves, but through the perspective of the humans, who came late to the region and saw the coming of the dragon, but know little of the history behind what it destroyed. In a sense, the story is told backward, each new story a revelation farther into the past, shedding light on a new person’s or people’s origin and role.

At the center of the large cast of characters is Midas. A lord of a minor holding, he is still mourning the loss of his son Miros when he discovers that someone is attempting to spark a war between the humans and the elves. He knows right away that such an act is foolhardy, and he makes contacts with the elves in order to try to ease tensions. The elf lady Alvanaria is eager to help keep the peace, but ultimately it’s the appearance of a new threat that prevents humans and elves from going to war. An army of wyrmen is rapidly approaching, and it will take humans, elves, and dwarves to stop them. But first, Midas, his sons, Alvanaria, the wizard Xax, and their companions will need to retrieve the shard of the Spire of Light from the dragon’s lair.

The quick resolution to the near war between the elves and humans is, I believe, a misstep. I like the idea of enemies allying to face a greater threat, but it feels too easy, and there’s no lingering tensions or distrust between the two sides that we see. This is partly because the focus is on Midas and his friends rather than the prince who almost started the war, but I would have liked to see more of it.

The quest to retrieve the shard is the central part of the novel, and forms the majority of the action. Joining Midas is Geldrath, a young recruit to the East Gate, the barrier between the civilized and barbarian lands, and his escorts, the dwarves Valgorn, Gorm, and Barmin, along the a number of soldiers and Midas’s friend, Lord Sol. Dragon slaying requires a good-sized squad, rather than a small party of 4-6 5th level adventurers. That makes sense, but it’s hard to keep track of everyone.

While Midas and his companions are busy dragon slaying, the rangers Edo and Orcbait (a nickname—we never learn his real one) are trying to save the barbarians beyond the East Gate. The old king of the civilized lands is dying, and the prince has little interest in the barbarian tribes or compassion for them. When the Wyrmen come to cut a swath through the barbarians, the prince refuses to offer them asylum. Edo and Orcbait aren’t satisfied with that decision, however, and they offer to lead a tribe of barbarians over a secret trail through the mountains. Eventually Edo, Geldrath, and Midas come together, and face off against the wyrmen and their leader.

There are four different point-of-view characters, but I wasn’t always convinced that they were the right point-of-view characters. I think that the mute Orcbait’s take on events would have been more interesting than Edo’s. And while Geldrath’s and Midas’s were probably necessary, they could have been supplemented with the dwarf Valgorn’s or the elf Alvanaria’s voice. Instead, all the POVs were human and male. Fortunately, not all the heroes are, but this means that some of the most heroic actions are told second-hand, while I would have liked to be more in the thick of the action.

Although the story relied heavily on well-worn tropes of the genre, it was still nicely told. The characters work, and are more down to earth and real than many heroic characters. Edo and Orcbait, in particular, are not the typical attractive young heroes. Both of them are older, have rotting teeth, and Orcbait is considered especially ugly. Midas is middle-aged and unhappily married, and the youngest hero, Geldrath, is inexperienced and lacks confidence or any skill with a sword. For all the heroes, more than once they try and fail in their heroism, and have to continue despite their failures. Geldrath’s most significant actions in the novel come shortly after cowardly running from a battle. The author does a good job of keeping this from being the simple try-fail cycle common in fantasy fiction, and make it more about growth of the characters. And those characters are ultimately what make the story work.