I took my kids to see Avengers: Battle of Ultron on Friday, and we heartily enjoyed it. It’s a remarkable funny and ridiculously fast-paced two hours and 20 minutes of superpowered mayhem, and it’s obvious that writer/director Joss Whedon and his cohorts have a genuine love for the source material, as it’s packed with asides and sly references for those who remember the Marvel comic by Stan Lee and Jack Kirby.

Yesterday I was doing what I do every Saturday — sorting piles of old paperbacks — when I stumbled on the 1967 Bantam paperback The Avengers Battle the Earth-Wrecker by Otto Binder. It came from a collection of 52 vintage paperbacks I bought on eBay for fifteen bucks last year (which also included The Unknown, Nine Horrors and a Dream by Joseph Payne Brennan, and Robert Bloch’s Nightmares.) Earth-Wrecker is one of only two Bantam Marvel tie-ins I’m aware of; the other is Captain America: The Great Gold Steal, by Ted White (1968).

The fascinating thing about The Avengers Battle the Earth-Wrecker, though, is that, despite being released nearly 50 years ago, it has a mild spoiler for the Avengers: Age of Ultron right on the cover. If you want to avoid spoilers, just scroll on to the next article. Otherwise, read on. 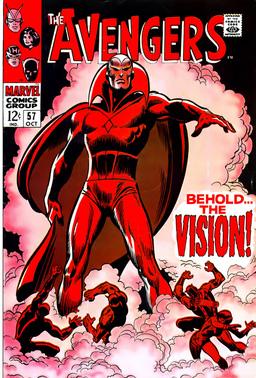 If you’ve already seen the movie, or even paid close attention to the trailers, it won’t be news to you that Pietro and Wanda Maximof, known as Quicksilver and the Scarlet Witch, join the Avengers, as portrayed on the cover of The Avengers Battle the Earth-Wreckers by an uncredited artist. Although they begin on the side of Ultron, they eventually become members of Earth’s Mightiest Heroes.

But the more subtle spoiler that first jumped out at me was related to the final minutes of the film, when the line up of the team undergoes a very dramatic shift.

Although I’d been reading The Avengers comic for decades, I’d managed to forget just how soon (and how often) the make-up of the team changed. While the first two films pretty closely reflect the team as it appeared in Avengers #1 (1963) — when it consisted of Hulk, Iron Man, Thor, Ant Man, and The Wasp — by the mid-sixties the roster had shed most of those names, and settled down to a core group that included Captain America, Hawkeye, Giant Man, Quicksilver, and the Scarlet Witch… the team that appears on the cover of The Avengers Battle the Earth-Wrecker.

If I remember correctly, that roster (plus The Black Panther) was roughly the team that battled Ultron and first encountered The Vision, in The Avengers #57… the events depicted in Avengers: Age of Ultron,

I was startled at the end of Avengers: Age of Ultron, when many of the original members departed, leaving Cap to re-constitute the team with the Vision, Scarlet Witch, Falcon, and War Machine, but I probably shouldn’t have been. Although some of the names have changed, that’s exactly what happened to the team in the comics.

There’s another (possible?) spoiler on the cover as well, of course… and that’s the presence of Hank Pym, Giant Man — originally known as Ant-Man, before he learned to reverse the effects of his shrinking tech to enlarge himself. Michael Douglas will play Hank Pym in the upcoming Marvel film Ant-Man, scheduled to be released on July 17. We’ll see if Ant-Man/Giant Man gets to join the Avengers for their next outing, the two-part The Avengers: Infinity War, scheduled for 2018, but my guess would be yes.

Ant-Man will be released on July 17. In addition to Douglas, it stars Paul Rudd as Scott Lang (the new Ant-Man), and Evangeline Lilly as Hope Van Dyne, the daughter of Hank Pym and Janet Van Dyne (the Wasp). John Slattery (Howard Stark) and Hayley Atwell (Agent Carter) reprise their roles from earlier Marvel films as well.

It seems pretty obvious to me that The Avengers Battle the Earth-Wrecker was an attempt to replicate the success of Bantam’s long-running pulp series. If the cover design (especially the back cover) seem at all familiar, it’s because they were clearly modeled after Doc Savage.

The similarity became even more obvious the moment I opened the cover and found the rundown of the cast on the first page, in the exact same manner I remember for Doc Savage:

CAPTAIN AMERICA — Transformed by science from an ordinary mortal into a man of matchless strength and intellect, he is their chosen leader.

THE WASP — in ordinary life, she is a superbly beautiful woman. When danger threatens, she becomes a startling agent of destruction.

GOLIATH — Ten feet tall, with the muscle power of a hundred strong men, he has pledged his total might to battle evil.

HAWKEYE — Wisecracking, seemingly irreverent, yet as fiercely courageous as the others, he possesses a longbow whose strange and deadly arrows few can withstand.

IRON MAN — A famous scientist, he must live in metal sheathing of his own brilliant design, for if he ever leaves it, he knows he will instantly die.

This daring band ranges over the earth and over the universe in search of those who would endanger their planet and their fellow man.

As for the The Avengers Battle the Earth-Wrecker… it’s terrible. It’s filled with the kind of atrocious comic book dialog that Stan Lee would never have touched in a hundred years. 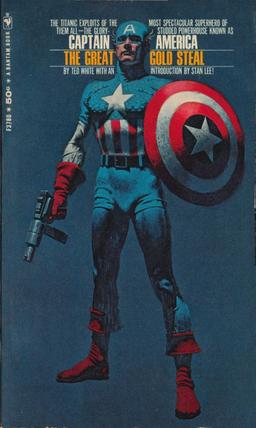 Otto Binder had a fine pulp pedigree. With his brother Earl, he co-wrote (under the name “Eando Binder”… E and O Binder) the Adam Link stories, and the Anton York, Immortal, series, and many other fine adventures. But in trying to emulate the comic roots and over-the-top action of the Avengers, he produced dialog that could only be charitably called “wooden.”

They looked up. Floating in thin air was an image of Karzz, shimmering as if cast from a distance. The image spoke: “All you destroyed was my android double.”

“Namely, a biological robot made of synthetic flesh-and-blood. Naturally, I could not set off three earth dooms simultaneously by myself. So I called for teleportation of my waiting android doubles from my aides in the future.”

Hawkeye still thought it was a bad dream. “You mean an android that could think, talk, and act like you?”

“Down to the last item,” gloated the Karzz-image. “As for me, I’m somewhere else on earth, utterly safe. I’m projecting my long-distance image and voice electronically to you from thousands of miles away.”

“Then you’re either in the South Seas or in the Sahara,” conjectured Iron Man.

“Brilliant,” mocked Karzz. “Now that you two have failed to halt earth doom number two, may I turn my full attention to the other two dooms, s’il vous plait?”

“That guy burns me,” exploded Hawkeye, “with his foreign phrase-dropping! If only he’d talk straight Americanese.”

It’s likely that Ted White’s contribution to the short-lived series, Captain America: The Great Gold Steal, was superior. If I ever come across a copy, I’ll let you know.

The Avengers Battle the Earth-Wreckers was published by Bantam Books in June 1967. It is 122 pages, originally priced at 50 cents. The cover artist is uncredited. There is no digital edition, and it has never been reprinted. Copies are available online at widely varying prices, starting at around $6.

“It’s filled with the kind of atrocious comic book dialog that Stan Lee would never have touched in a hundred years.”

We’ll see if you agree with that after I’ve published my review of _Daredevil_ #162. It’s possibly the worst comic book I’ve ever read.

The cover may have been, if the internet is reliable, painted by Robert McGinnis.

Was that written by Stan Lee? I hadn’t realized he hung on to Daredevil that long.

> The cover may have been, if the internet is reliable, painted by Robert McGinnis.

That sounds likely. Thanks Christian!

By the time of #162 Lee had stepped back from actual writing and moved on to other things, but I am quite certain I can find dialogue from early _Avengers_ where Wasp complains about the need to go shopping that compare.