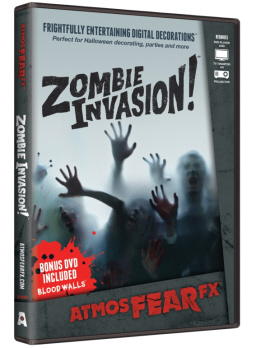 Back at the 2013 Haunted Attractions Show we met the very talented and creative folks at AtmosFearFX Digital Decorations. These are the people responsible for the digital loops of various horror scenes which can be projected on any surface with stupendously unnerving results.

Covering a large window with rear projection cloth, he projected from the outside of the room. The result was life-sized zombies beating against the window leaving bloody hand prints before dragging themselves out of view.

The loop repeated with a timed frequency and with enough slight differences to be nothing short of perfect.

You know it’s a good effect when a guest asks where you hired the “people dressed as zombies hanging around out on the terrace and banging on the window.”

And just like a gift that keeps on giving, there’s no end of fun to be had once you make the nominal investment in a project (available on eBay) and the fabric which is available at most stores selling home theater equipment at around $10 a square foot.

Here’s a look at the final result. 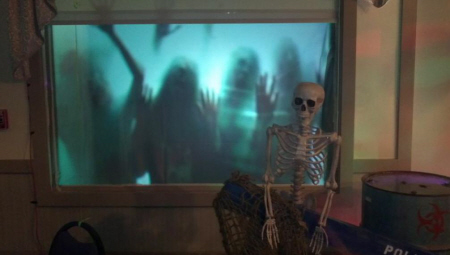 Take this recent bit of hilarity inflicted on innocent pedestrians waiting at a bus station in Vienna.

AtmosFearFX offers a wide range of horror effects on DVD or instant download, which can also be played on tablets and flat screen monitors in addition to being projected. Or for you sunnier readers (though I doubt there are any here) check out their AtmosCheerFX line, for more family-friendly options. Prices start at $9.99.